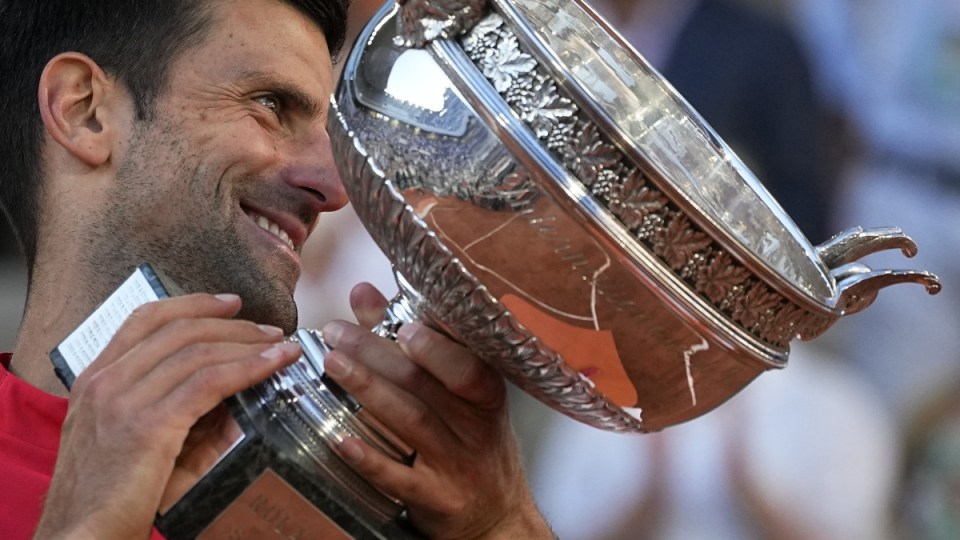 Officials have confirmed Novak Djokovic will be allowed to defend his French Open title in Paris. Photo: AP

Novak Djokovic will be allowed to play at the French Open even if he is not vaccinated against COVID-19, as long as the coronavirus situation in France remains stable.

Russian tennis players, including top-ranked Daniil Medvedev, will also be admitted to play at Roland-Garros but as neutral athletes because of the war started by their country in neighbouring Ukraine.

Organisers said on Wednesday there was nothing at the moment preventing Djokovic from defending his title at the clay-court grand slam.

France this week lifted measures requiring face masks in most settings and allowing people who aren’t vaccinated back into restaurants, sports arenas and other venues.

“At this stage there is nothing to stop him returning to the courts,” French Open director Amelie Mauresmo said.

Djokovic was deported from Australia in January after a legal battle over whether he should be allowed to enter the country, forcing him to miss the Australian Open.

He told the BBC last month that he was willing to miss upcoming grand slam tournaments as well if they required him to get vaccinated.

French tennis federation president Gilles Moretton said that although Djokovic was now free to play, French authorities might be forced to introduce new restrictions if the virus situation deteriorated before the tournament started on May 22.

“Today there is a little virus that is going around. We are quite confident that the lights are green, but we are all cautious about what has happened over the last two years.”

Asked whether Russian tennis players would be allowed to compete at the tournament in the light of the war in Ukraine, organisers said they planned to stick to decisions suspending Russia and ally Belarus but allowing their players to compete as neutral athletes.

Russia and Belarus have been kicked out of the Billie Jean King Cup and Davis Cup team competitions. Their players are allowed to compete in WTA, ATP and grand slams, although not under the name or flag of Russia or Belarus.

Other sports, including track and field, soccer and figure skating, have barred Russian and Belarusian athletes from competition.

Wimbledon organisers are discussing with the British government about whether Russian players should be allowed to compete at the grass-court tournament this year if they don’t distance themselves from President Vladimir Putin.

Ms Oudea-Castera said French organisers did not plan to start a detailed and individualised analysis of players’ individual situations, which could be “extraordinarily dependent on the family situations experienced by each of them”.

Mr Moretton said he expected the Roland Garros venues to be used at “maximum capacity” this year after the previous two editions were affected by the pandemic.

Tickets went on sale this month. Mr Moretton said about 500,000 seats out of the 600,000 available for day sessions had already sold.