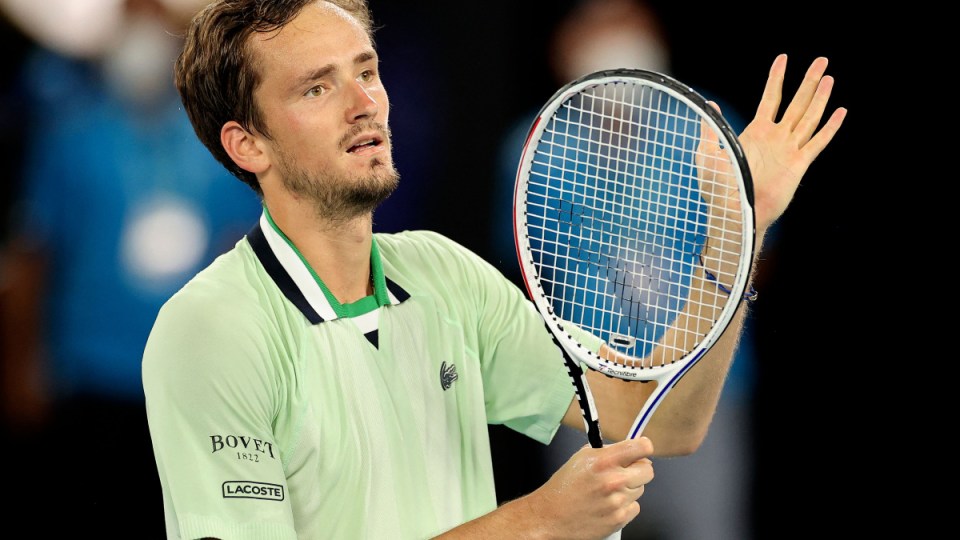 World No.1 Daniil Medvedev may have to renounce Russia's invasion of Ukraine to play Wimbledon. Photo: Getty

World tennis No.1 Daniil Medvedev faces a potential ban from Wimbledon as sanctions tighten against Russia for its invasion of Ukraine.

British Sports Minister Nigel Huddleston said on Tuesday (local time) he would not be comfortable with a “Russian athlete flying the Russian flag” and winning the grass court grand slam in London.

He said individual Russian athletes, such as Medvedev, may be asked to provide guarantees they will not fly their national flag while competing in Britain – and even to publicly denounce Russian leader Vladimir Putin.

“We need some potential assurance that they are not supporters of Vladimir Putin. We’re considering what requirements we may need,” Mr Huddleston told a parliamentary select committee when asked about Medvedev competing at Wimbledon.

“We are considering what requirements we may need [to implement] to try and get assurances along those lines.”

Mr Huddleston said many nations had agreed to bar Russians from competing in sports events on their soil.

“There are also visa issues as well. When it comes to individuals, that is more complex,” he said.

“Absolutely nobody flying the flag for Russia should be allowed or enabled.”

Mr Huddleston said many athletes had multiple or dual citizenships and would be willing to compete as “non-aligned, non-flag bearing entities” but that the situation demanded further action.

“We need some potential assurance that they are not supporters of Putin and we are considering what requirements we may need to try and get some assurances along those lines,” he said.

Mr Huddleston said he was discussing the issue with Wimbledon organisers, the All England Lawn Tennis Club.

Medvedev rose to No.1 in the men’s world rankings last month, although he will lose top spot to Novak Djokovic following a third-round loss at Indian Wells on Monday. He denounced Russia’s invasion of Ukraine on the day he took the world top spot – and removed the Russian flag from his Instagram profile about the same time.

“By being a tennis player I want to promote peace all over the world,” he said.

“It’s just not easy to hear all this news. I’m all for peace.”

Russia and Belarus have been tossed out of tennis’ Davis Cup and Billie Jean King Cup as sanctions tighten over the Ukraine attacks. Russian and Belarusian players can still play on the elite ATP and WTA Tours but not under the name or flag of their countries.