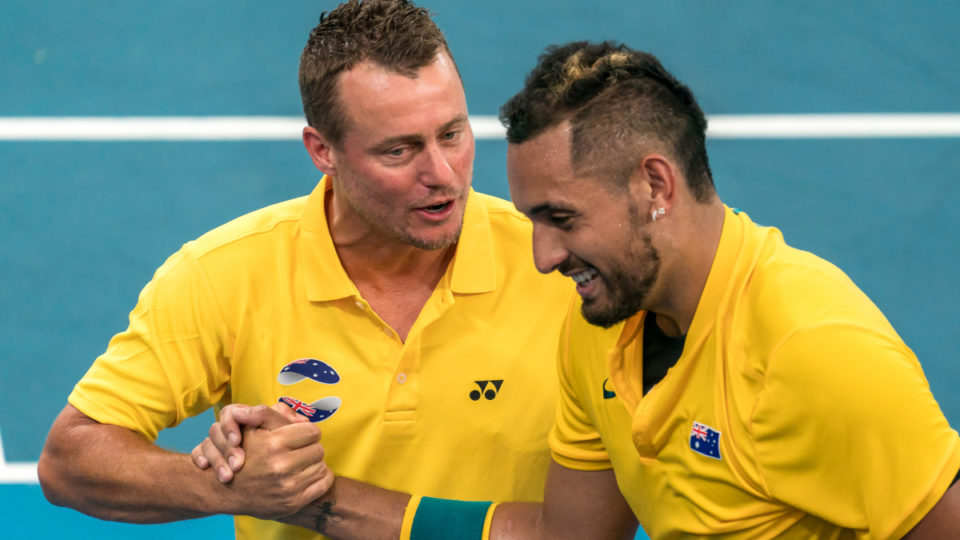 Lleyton Hewitt wants Nick Kyrgios to end his three-year Davis Cup absence later this year, adamant one of the great crowd-pleasers in tennis is part of Australia’s best team.

Kyrgios will sit out this weekend’s qualifying tie against Hungary, with the 26-year-old knocking back an approach from team captain Hewitt to play in Sydney due to meetings in the USA.

The former world No.13 has not played for Australia since 2019, but Hewitt is hopeful he can bring him back into the fold for the group stage or finals.

“We wanted him back for this match. For us it’s disappointing he wasn’t available for this particular tie,” Hewitt said.

“He is absolutely in the (best) team.

“I get along extremely well with Nick. We have plenty of open discussions. He loves playing but he has a lot of other things going on as well.

“Hopefully he gets the opportunity to be back in the team because I actually think it helps his tennis and enjoyment of the sport as well.

“Hopefully we get through this and he is available later in the year.”

Kyrgios’ absence from Davis Cup has been consistent with all tennis since the start of the pandemic.

The Canberra product has played in just 10 tournaments since the 2020 Australian Open and has already indicated he will sit out Roland Garros this year.

His repeated absences during that time have seen his ranking drop from No.20 in the world to No.134.

Nevertheless, he has shown flashes of brilliance in reaching the third round at Wimbledon and the Australian Open last year and winning the doubles in Melbourne this summer.

“The last two years have been tough for him, because Nick enjoys being home,” Hewitt said.

“He is fortunate though that he can pick up a racket and be able to compete with the best players with very limited matches under his belt.

“Not many players can do that.

“For him to get to his absolute best he does need to get those matches. Absolutely.

“But I still think he will pick and choose where he wants to play though.

“In a lot of ways he plays for different reasons than a lot of other guys. He is not driven by the majors and winning the titles all the time.

“Sometimes it’s for the entertainment and enjoyment that he gets from wanting to play. It’s up to him where the motivation takes him.”

It comes after Kyrgios revealed last week he had battled depression and substance abuse around the 2019 Australia Open, detailing one of the “darkest periods” of his life.

Hewitt said he was in regular contact with Kyrgios, well aware of the mental health strains during the pandemic.

“It’s hard when you’re always the centre of attention and people assume that everything is rosey out there,” Hewitt said.

“It’s probably not for most people at some stages.”

Meanwhile, Hewitt was coy on whether Alexei Popyrin or Thanasi Kokkinakis would play singles with Alex de Minaur in Sydney, with John Peers and Luke Saville expected to play doubles.