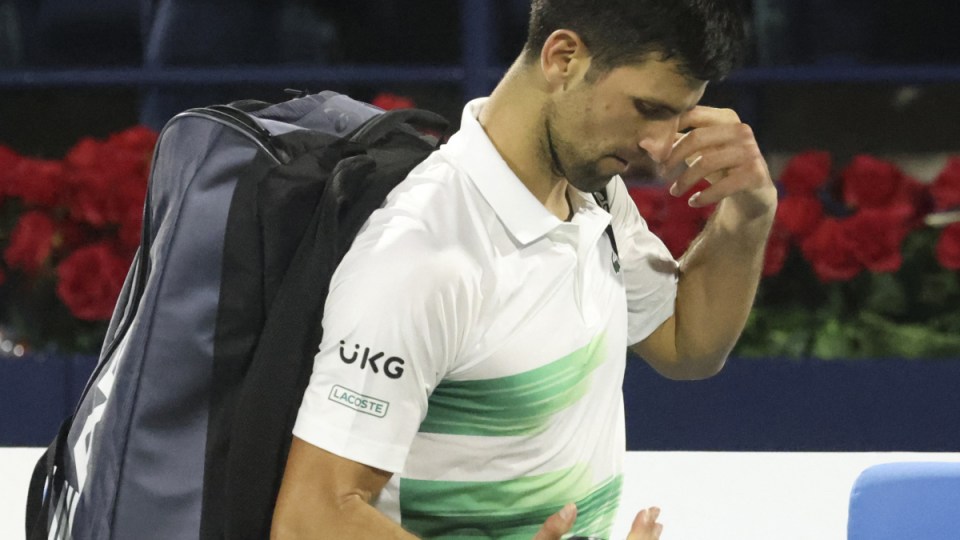 Novak Djokovic looked sad and a bit resigned in Dubai as he finally lost his world No.1 ranking. Photo: AAP

Novak Djokovic will be overtaken as world tennis No.1 by Daniil Medvedev next week after a shock loss to qualifier Jiri Vesely in the quarter-finals of the Dubai Tennis Championships.

Playing his first tournament of the year following his deportation from Australia, Djokovic had looked impressive in his first two matches.

But a combination of some unusual mistakes and an inspired southpaw opponent contributed to a 6-4 7-6 (7-4) defeat on Thursday that spelled the end of Djokovic’s two-year reign at the top of the rankings.

“I congratulate Jiri. He played better. He just went for his shots. His serve was big. His whole game was big.

“I expected myself to play on a higher level, for sure. I mean, I can do better. But credit to Jiri.”

The Serbian has held the top spot since overtaking Rafael Nadal on February 2, 2020, setting a record last March for weeks at the top that currently stands at 361.

But next week that position will be taken by US Open champion Medvedev, who is through to the quarter-finals of the Mexican Open in Acapulco.

The Russian knew going into this week that a title would guarantee him top spot and, speaking at the weekend, Djokovic said: “He deserves to be No.1.

“Eventually it’s going to happen. If it happens this week, I’ll be the first one to congratulate him.”

Medvedev, who suffered an agonising five-set loss to Nadal in the final of the Australian Open last month, will become the first man other than Djokovic, Nadal, Roger Federer and Andy Murray to hold the world No.1 ranking since Andy Roddick in February 2004.

Czech Vesely is ranked down at 123 but has been playing well above that this week. The 28-year-old is the lowest-ranked player to beat Djokovic for almost four years.

“It’s an amazing feeling. I never really thought I would have a chance against Novak,” Vesely said.

“He is one of the greatest of all time.

“It is great for tennis to have someone new at world No.1. Novak is such a champion, he has been No.1 for 361 weeks, but tennis needs new world No.1s and there is a new generation coming up.”

Djokovic retrieved an early break but Vesely, who won their only previous meeting in Monte Carlo six years ago, pressured the top seed’s serve again in the seventh game and held his nerve to take the first set.

He broke Djokovic for a third time in the seventh game of the second set and, although he was unable to serve out the victory, Vesely claimed the tiebreak to secure a famous win.

Djokovic admitted he was still trying to find his rhythm.

“The more matches I play, the more confident I will be, the more comfortable I’ll be feeling on the court,” the 34-year-old said.

In the semi-finals, Vesely will play Canadian Denis Shapovalov, who defeated Ricardas Berankis 7-6 (7-4) 6-3.

The other last-four match will feature Andrey Rublev, who came from a set down to beat American Mackenzie McDonald 2-6 6-3 6-1 against Hubert Hurkacz, who earned a notable 6-3 6-3 triumph over rising Italian Jannik Sinner.

How to save $50 off your food bill and still eat tasty, nutritious meals
Zverev ‘sorry’ after shocking Acapulco meltdown
Today's Stories