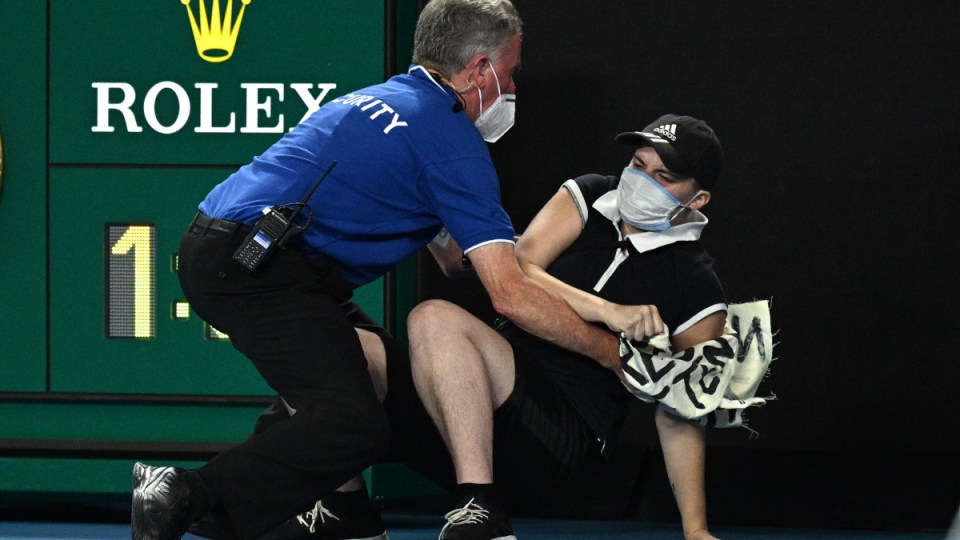 The Australian Open men’s singles final has been disrupted by a protester who jumped onto the Rod Laver Arena court with a sign calling for the abolition of refugee detention.

Rafael Nadal was down a set against Daniil Medvedev but led 5-3 in the second set and was on break point when play was stopped after 90 minutes.

The protester leapt onto the court from the stands, only metres away from Medvedev, and attempted to unfurl a banner.

Security pounced and dragged the protester from the court, with play resuming shortly after the incident.

The incident comes after the issue of refugee detention in Australia was thrust firmly into the international spotlight when world No.1 Novak Djokovic was held in Melbourne’s Park Hotel before his deportation earlier this month.

The Park Hotel is infamous for its use as a makeshift detention centre, with refugee advocates estimating around 32 men, detainees flown to Australia from Manus Island and Nauru for urgent medical care under now-defunct Medevac laws, are held there.

Protesters and refugee advocates were on hand attempting to raise awareness for the men’s plight at the same time as Djokovic supporters were campaigning for the Serb to be able to play at the Australian Open.

While Djokovic departed Australia but many of the men remain at the hotel with some having been in Australia’s immigration detention system for several years.