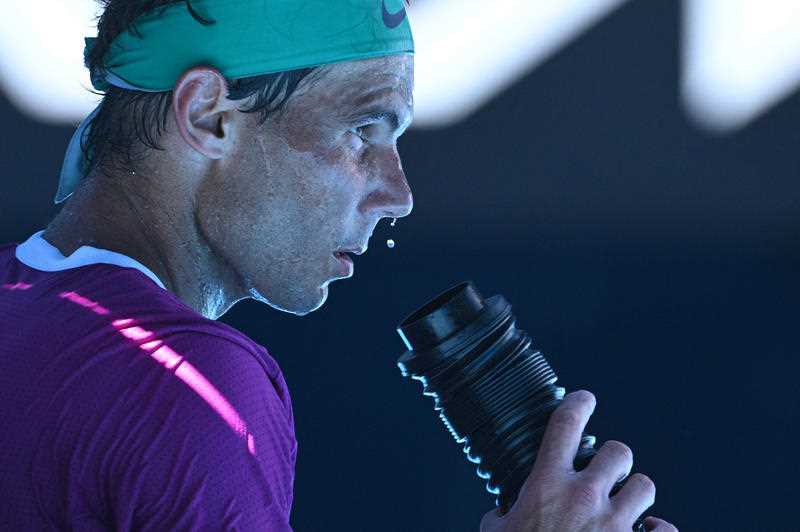 Rafael Nadal may have the odds stacked against him when he takes on Italian seventh seed Matteo Berrettini. Photo: AAP

Rafael Nadal has his sights set on his fifth Australian Open final as he takes to the court at Melbourne Park on Friday afternoon, for a semifinal against Italian seventh seed Matteo Berrettini.

It has been smooth sailing for the 20-time grand slam champion so far at this Open.

He is the only previous winner in the men’s singles pool, with heavy-hitters Roger Federer and Novak Djokovic ruled out of the tournament.

All three players are tied at 20 career grand slam titles apiece. Should Nadal triumph in Melbourne on Sunday, he will gain a sweet edge on his rivals.

But the Australian Open has been notoriously unkind to the Spaniard. He last lifted the Norman Brooks Challenge Cup in 2009 after a five-set victory against Roger Federer. Since then, Nadal has been a four-time runner-up at the Open, but never again a champion,

Nadal spoke of the three-way-tie between his rivals after his gruelling five-set quarter-final match against young Canadian Denis Shapovalov.

He said that, while he was always hungry for a win, his happiness wouldn’t depend on him coming out on top.

“You can’t be always frustrated if the other, if the neighbour has a bigger house than you or a better phone or a better thing, no?

“I’m not going to be frustrated if Novak or Roger finishes the career with more grand slams than me, no?”

Before thinking about the final, Nadal will need to dig deep to topple Berrettini, who may hold the competitive edge.

Nadal will need to work hard to make sure he does not become a victim of circumstance come Friday afternoon, with the Spaniard reportedly in recovery after playing in Melbourne’s withering heat.

The game was paused while Nadal was attended to and given a pill to settle his stomach – an uncomfortable stomach is a typical symptom of heat stress.

Berrettini also spent four hours on court in his quarter-final match against Gael Monfils. But he had the fortune of an evening timeslot, avoiding the worst of this week’s heatwave in the Victorian capital.

Both semi-final contenders have had two days to rest and recover. However, with Berrettini 10 years Nadal’s junior, the Spaniard’s odds are certainly stacked against him.

Nadal recognised he would need to be at his best to triumph on Friday afternoon.

“I need to play my 100 per cent and my highest level if I want to keep having chances to fight, to be competitive, and to try to be in the final.”

The two have once played once before in 2019 in a US Open semi-final, Nadal sweeping in straight sets.

Tsitsipas ‘in the zone’

Fourth seed Stefanos Tsitsipas only has eyes for a maiden Australian Open title with the Greek fan favourite declaring he’s “in the zone”.

Last year the pair met at the same stage, with the Russian toppling Tsitsipas 6-4 6-2 7-5.

In the quarter-finals, Tsitsipas thrashed rising Italian Jannik Sinner 6-3 6-4 6-2 in comfortably his best match of the 2022 Open.

“So far it has been the most consistent and the best match I’ve had in the tournament,” the world No.4 said.

Having replaced Djokovic as the tournament’s top-ranked player, Medvedev has the opportunity to live up to that lofty billing and set a new mark along the way.

The 2021 US Open champion is attempting to become the first man in the 55-season Open era to win his second major title in his next grand slam appearance.