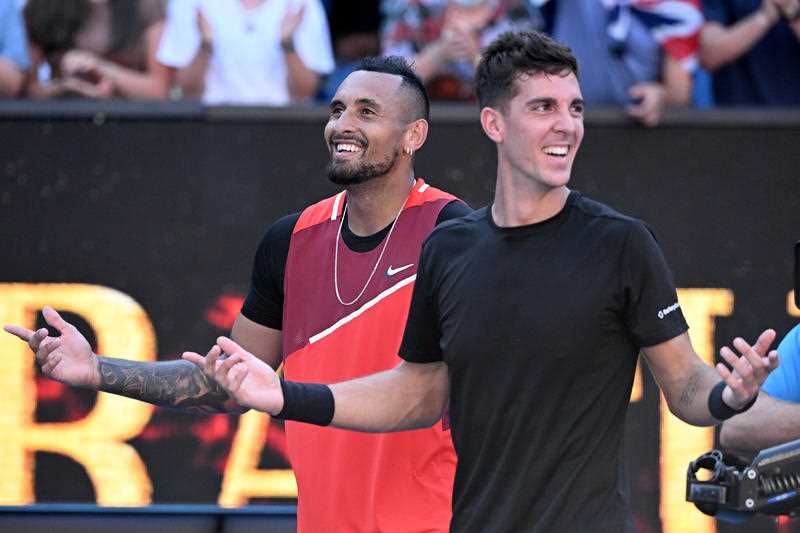 Doubles wildcards Nick Kyrgios and Thanasi Kokkinakis are through to the Australian Open men’s doubles final after a thrilling semi-final victory.

An all-Australian men’s doubles final has now been confirmed, with Aussies Matthew Ebden and Max Purcell set to come up against the Special Ks on Saturday night.

Kokkinakis had previously encouraged the crowd to “sink p—” before showing up to their semi-finals clash. The vocal crowd at Rod Laver Arena did not disappoint.

The scene was set at the close of the first point, when Kyrgios egged on the fans, urging them to raise their volume.

There was rarely a moment of silence on court, with the boisterous audience throwing in its two cents at every opportunity.

“Time violation, umpire,” one yelled on the opposition’s serve.

And Kyrgios got stuck into an unruly fan who yelled during his service motion.

After losing a point on his serve, Kyrgios told the fan in no uncertain terms: “Don’t scream out during my serve you numb-nut”, which was met by applause from the crowd.

The nonsense from the audience spurred several pleas from chair umpire James Keothavong.

“Thank you to the guy at the top. We hear you. Please keep it clean and fair. Thank you.”

Everything went to plan so far for the unconventional duo, not dropping a service game until halfway through the second set..

Kyrgios exploded on the break, taking his frustrations out on his racquet, but managed to gain his composure to secure the second set.

The pair have shocked and delighted crowds at Melbourne Park this year.

Despite both players being knocked out of the singles competition early in the game, as a unit, they have sent home the first, fifteenth, sixth and third seeds on their path to the final.

Kyrgios and Kokkinakis are the first to take to centre stage in Thursday’s epic Aussie double-header, with Australian of the Year Dylan Alcott eyeing his eighth Australian Open title, and world No.1 Ash Barty vying for a spot in Saturday’s women’s final.