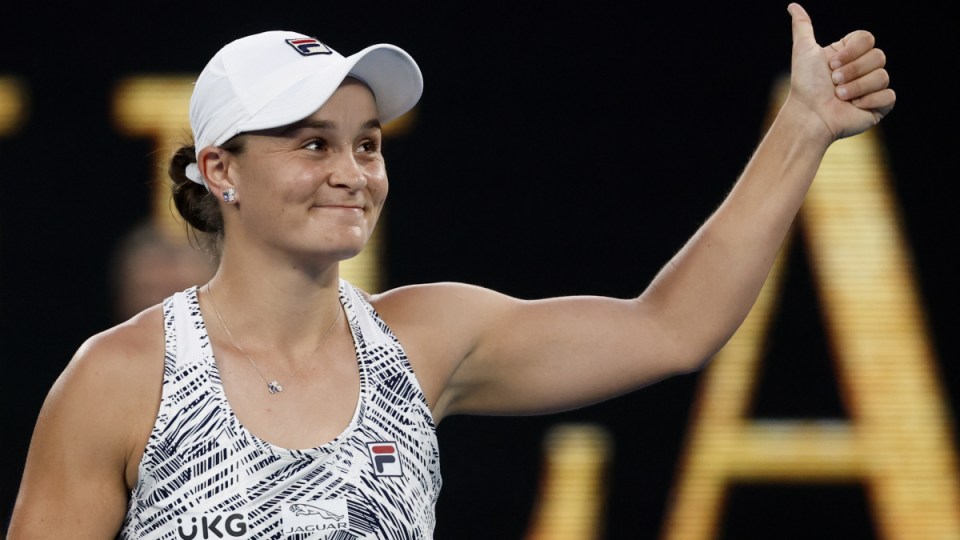 Ash Barty will face her most formidable opponent in Madison Keys on Thursday night. Photo: AAP

Check out today’s order of play on Rod Laver Arena.

Prime time pragmatism by the organisers? Unquestionably too.

Second match, 2.30pm start. No more small courts for the Special Ks, Nick Kyrgios and Thanasi Kokkinakis whether they like it or not. No.3 seeds Marcel Granollers and Horacio Zeballos, a seriously capable pair, are the doubles opposition but such has been the rocketing evolution of the Aussie duo that who they play is almost incidental. Expect the most engaged crowd this week on Rod Laver Arena.

Remarkably this is an aperitif only.

Post K&K, next up is our newly installed Australian of the year, Dylan Alcott, facing off against Sam Schroder, No.1 and 2 seeds respectively in the quad wheelchair singles final.

And then we have it, 7pm and guess who? World No.1 Ashy Barty. Even Roger Federer and Serena Williams would blush at a scheduling slot more blatantly tilted to the big names.

As a way to consigning Novak Djokovic to last week’s news it is a surefire winner but as with Fed and Serena, Barty deserves top billing. Right now, she is seriously good.

Madison Keys is her opponent, the lowest ranked of the four remaining women but almost certainly the most challenging opponent of the three for Barty.

They sit 50 places apart in the rankings but expect the Florida-based Keys to have a real go. Get past this and the final for the Aussie may well be a comparative walk in the park.

Not that Barty would ever admit to anything veering from the centre ground. We have heard from her plenty this tournament but are yet to hear much of note.

She has the match blinkers on and her only focus is ensuring she is the last woman standing come Saturday night. It is entirely understandable if increasingly frustrating.

Take the on-court chat with the victor on every show court. Nobody expects the Spanish inquisition but the standard two or three-minute natter has become cliched patter only regardless of who is talking (Daniil Medvedev aside perhaps).

‘Oh (insert any player) you’re wonderful, how do you do it?’ And so on.

Every opponent is ‘tough’ and every player is going on court ‘to have fun’ it seems this year.

What coach sends their player out ‘to have fun’ after a lifetime of serious hard work to try and win a major?

Rabbit in the spotlight

An hour after she saw off Jessica Pegula in just 63 minutes on Tuesday night, Barty praised Pegula for making her work so hard, the toughest competitor so far apparently. Not if you were sitting courtside it wasn’t. Pegula was a rabbit in the spotlight, awestruck, starstruck, unable to play or think her way out of a one-way massacre.

So bamboozled was she that her first coherent thought all night will probably have come some time after a serious physio session, an extended ice bath and a good few cocktails.

She was taken apart by Barty who used her backhand slice to torment the American, a dismantling of body and soul that was verging on the seriously cruel.

“It was just too good tonight from Ash,” Pegula said. “I think we’ve seen her do that to a lot of people.  Unfortunately, I was a victim tonight to that.  She played a great match, there wasn’t much I could do.

“You feel pretty helpless. When she gets into a rhythm, she can kind of run away, her game just kind of picks you apart a little bit and it can be really frustrating because you don’t feel like you can get a lot of free points. There’s really not much you can do.”

Barty meanwhile looks for positives or the neutral, dishing out praise where it isn’t always merited. Stick to this line and what she says eventually loses currency.

Take a question about the two protestors forced out of Melbourne Park by organisers over the middle weekend for wearing t-shirts in support of the missing Chinese player Peng Shuai.

“To be completely honest with you, I haven’t followed it or haven’t seen any of that coverage. I’m not one to really flick on the tennis when I’m home or away from site,” the No.1 said.

It’s not up to Ash to be a panacea for all wider sporting questions but with her lengthy spell at the summit – and her Wimbledon title too – comes an authority and responsibility that she can use widely should she choose. She would suit the role well.

Pegula, intriguingly, has a good take on today’s semi-final. It will be close she believes if Keys optimises her kick serve and forehand.

“Ash obviously can beat anybody but so can Maddie. Maddie is playing really well but so is Ash.

“I think she (Barty) just does everything better honestly than most people. I think her defence and her serve are probably her best kind of assets.”

Keys must not be underestimated

Keys, 26, must not be underestimated. Like Barty she has won a WTA tournament in Adelaide already this year and has reached more semi-finals in the majors before today than Barty – four against three.

Injury and illness sidelined her for much of 2021, hence the rankings dip.

Dealing with the Barty slice will be a prime consideration.

“I think she does such a good job at resetting the point constantly, being able to get back to neutral off a ball. You can’t do a ton off her slice because it comes in so low,” Keys said.

They have met three times and Barty leads 2-1. Much will depend on whether the occasion gets to the Aussie. If she can keep this at bay, as she has so far this month, then she will win. But it may not be straightforward.

The Polish player Iga Swiatek will be mightily happy that she plays after Ash today given her three-hour victory over Kaia Kanepi in yesterday’s searing heat. At a set down the 20-year-old former French Open champion looked cooked but dug in somehow to prevail 6-3 in the third. She is an outstanding player on her day but dodged a bullet and 24 hours is no time to recover from such an exertion.

Earlier, today’s opponent Danielle Collins was a straightforward winner over Alize Cornet, done and dusted before lunch. On that basis alone favour the lower ranked American, perhaps the most perennially pumped player on the women’s tour and a graduate of the unforgiving American college circuit. Collins, 28-years-old, has come late to the pro game and behind the ever gleaming smile there is a fortitude and grit. She was a semi-finalist here too in 2019.

Seventh seed Swiatek is the more cultured, and better, player but her match against Kanepi was a draining epic and a strong start should see Collins into Saturday’s final.