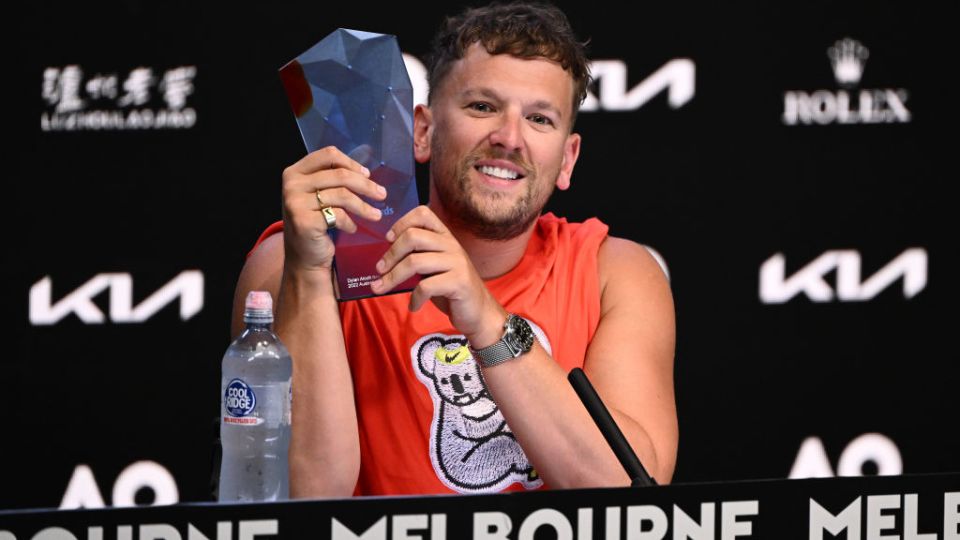 Dylan Alcott holds his 2022 Australian of the Year trophy ahead of his Australian Open final. Photo: Getty

It has been quite the 24 hours for wheelchair quad world No.1 Dylan Alcott.

Alcott triumphed over Brit Andy Lapthorne on Tuesday in a resounding 6-3 6-0 victory, earning himself a spot in his ninth consecutive Australian Open final.

To add to the sweet victory, Alcott was named the 2022 Australian of the Year just hours later.

Mere hours after shaking hands with the Prime Minister and accepting the honour, Dylan Alcott AO jetted back to Melbourne for yet another press conference.

Alcott fronted the media enthused, pumped – but no doubt tired.

“I’m cooked,” he laughed at the beginning of the conference.

Alcott said he couldn’t quite believe the events of the past 24 hours.

“This one’s really hit me in the heart. Like honestly, I didn’t think I was going to win,” he said.

“If you could tell 14-year-old Dylan he was Australian of the Year, [he] wouldn’t believe it for a second.”

It is easy to forget that Alcott still has the biggest task in front of him – winning the Australian Open final, and playing in the final match of his career.

The seven-time champion is hoping the excitement won’t leave him short of energy ahead of his finals clash, admitting he is currently “more fried” than he has ever been.

“I won the 2018 Australian Open on a drip every night in hospital with a blood infection. That was pretty gnarly. But, no, I am probably more fried right now.”

Alcott will take on second seed Dutchman Sam Schröder in the final on Thursday in an epic triple-header.

Alcott found out about the triple-header special while on camera.

“What, a triple-header? Are you serious? No excuse not to watch that, unless you hate tennis or hate me.”

It certainly won’t be one to miss. It will be the final time Alcott will play in a grand slam, having confirmed the 2022 Australian Open would be his final tournament in December.

Alcott said he can’t wait to get out for his “last dance” and promised that “this is it” for his career – win or lose.

“I love John Farnham, but I’m not going to be the wheelchair John Farnham and come back. I promise, this is it.”

Now the festivities are over, a determined Alcott said it’s time to put his game face back on.

“In 20 minutes when I’m done with press, please leave me alone so I can win the Australian Open.”