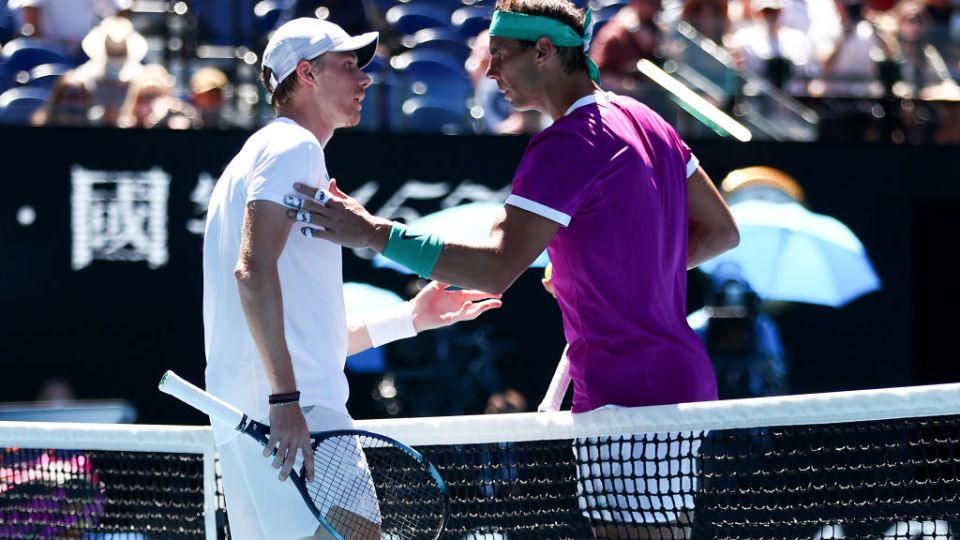 Rafael Nadal’s quarter-final opponent Denis Shapovalov has blasted the match’s umpire as “corrupt” as the two battle it out for a spot in the semi-finals.

Nadal had full control of the game on Tuesday, hoping to continue his Australian Open redemption arc.

The Spaniard capitalised on a bundle of cheap points handed to him by Shapovalov, who was able to return just half of Nadal’s first serves in the opening set.

Shapovalov’s residual frustration from the first set came to a nasty head at the opening of the second.

The young Canadian took issue with the umpire over Nadal’s serve timing.

He appeared to argue that Nadal should have received a time violation for taking too long on his serve, despite having seven seconds left on the clock.

As Nine commentator Jim Courier explained, even though Shapovalov may have been ready to receive, he must play to the pace of the server.

The two players met at the net to talk out the issue in a bizarre confrontation. Nadal eventually patted Shapovalov on the arm before play resumed.

A rattled Shapovalov struggled to lift in the second set, Nadal breaking his serve and claiming his second set.

The Spaniard, who is the sixth seed at Melbourne Park, is hoping to break his quarter-finals streak at the Australian Open.

He’s reached the quarter-finals in the past two years, falling to Stefanos Tsitsipas in 2021 and Dominic Thiem in 2020.

Tuesday afternoon’s match gives Nadal a chance to continue on a path to replicate his 2009 victory.

Ash’s next opponent heats up

Earlier there was a major upset in the women’s draw, when Madison Keys became the first to unlock the door to Open semi-finals.

Krejcikova joined the slew of players struggling in the Melbourne heat while Keys, who trains in Florida, powered through.

Keys will next face either Australia’s top-seeded title favourite Ash Barty or US compatriot Jessica Pegula on Thursday for a place in the final. Barty and Pegula clash on Tuesday night.

Should Barty emerge victorious, she has a slight competitive edge, having convincingly won two of her three previous encounters with Keys.

It is the first time Keys has made an Australian Open semifinal since since 2015.

“It means a lot. Last year was really hard and I did really everything I could with my team in the off-season to re-set.

Keys said she feels “more prepared” this time round in the semi-finals.

“I’m seven years older … so I’m a little bit more prepared this time around than I was all these years ago,” she said.

“It’s been kind of nice to be an underdog for the first time in a long time.”

Keys said it will be “a very tough match” no matter her next opponent.

“Ash [has a] great slice, can dominate with her forehand,” she said.

“Either way, it will be a very tough match.”

Australian quad wheelchair champion Dylan Alcott is into the Australian Open final after emerging triumphant from his semi-final contest against Britain’s Andy Lapthorne.

The world No.1 and defending champion soared 6-3 6-0 in front of a sizeable crowd on Tuesday – onlookers keen to catch a glimpse of superstar Alcott in his last outing at the tournament.

Lapthorne got off to a great start, cracking the ball cross-court, way out of Alcott’s reach.

But Alcott soon found rhythm, forcing Lapthorne to defend at the baseline while beautifully slotting a sneaky volley just over the net.

Unfortunately for him, the tactic misfired occasionally, ball meeting net instead and falling agonisingly short.

The second set was a far different story, with Alcott achieving a clean sweep 6-0.

Alcott will face the Netherlands’ Sam Schroder in Thursday’s final, hoping to add to his record of 16 major singles titles.

‘You guys are all corrupt’: Shapovalov savages umpire