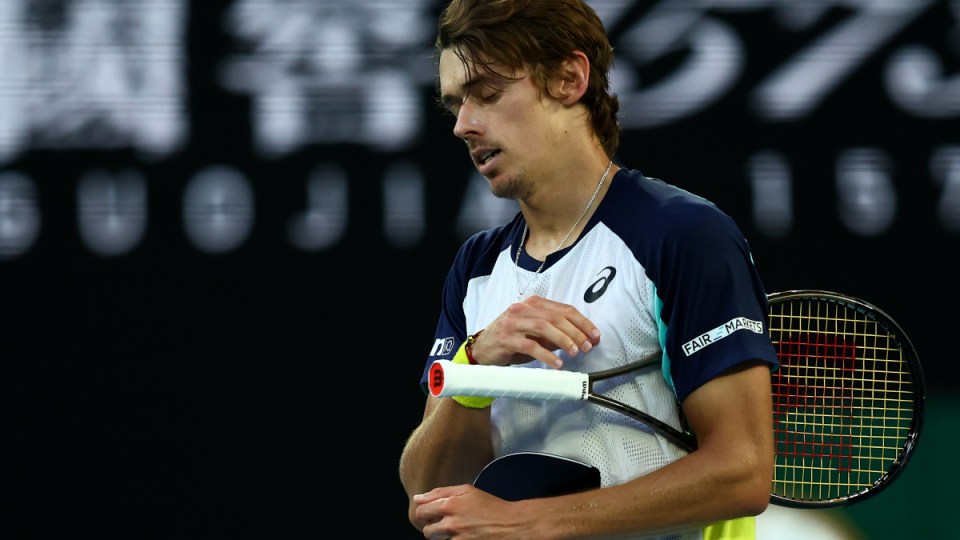 Australia’s hopes of a male singles champion have gone for another year as Alex de Minaur, the last man standing, was blasted off court by Italy’s Jannik Sinner in a high-quality match on Rod Laver Area on Monday evening.

De Minaur, the 32nd seed, played well and should not be distraught.

The whippet-thin Sinner, ranked 10, was simply in a higher league from the off, winning 7-6 6-3 6-4. Do not discount him for the men’s title on Sunday.

Sinner has grown as a person he said in the immediate post-match chat which was interrupted as a butterfly landed on the winner’s baseball cap and refused to budge.

Maybe something was lost in the translation, maybe it was the the two hour 35 minute slog, but Sinner was lost for words.

“Overall, it’s been a good summer for me. It’s a bittersweet ending. I had my chances but didn’t take my opportunities,” he said.

It had been almost three hours after their appointed start time when the men took to court in the afternoon.

The two previous matches – upset wins for Danielle Collins and and Alize Cornet – had overrun in spades but in the cauldron the temperature was still hovering at 33 degrees. Down on RLA it will have been many times more.

Sinner, with his northern Italy skiing upbringing, will have been grateful for the weather respite, however marginal.

Two years younger than Demon, the 20-year-old has cemented himself in higher company than the Aussie, making the top 10 last year, the youngest player to do so for 14 years.

There are similarities aplenty. Both men have five ATP titles but are yet to go deep in the second week of a major. They are on the fringe looking in still but the joint potential is vast. And it has long been spotted.

De Minaur has been nurtured by Lleyton Hewitt and Tony Roche for several years now, even staying with the Hewitt family in Melbourne for a couple of years when he was younger, while Sinner hooked up with Rafael Nadal a year ago in less conventional circumstances.

Remember the COVID restrictions getting into Australia 12 months ago? Two weeks quarantine for overseas players, three if you came in on a flight where someone, no matter how many seats back, was afflicted.

Somehow, and money was involved, the South Australian government persuaded eight of the world’s best players (the true giants – Nadal, Novak Djokovic, Serena Williams, Naomi Osaka and more) to hole up in an Adelaide hotel for two weeks after touchdown before heading over to Melbourne and the Australian Open.

Sinner also got the call. Nadal needed a hitting partner for the two weeks – isolation was not the strictest as the players were allowed out to train for several hours daily – and the Italian was the lucky recipient.

It is easy to forget he is still very young.

Unless you were in Adelaide last year when the freshly released players gathered on the banks of the river Torrens to meet the media. Williams spoke well, as did Djokovic and the immaculately tuned out Nadal.

Loitering at the back was Sinner, who perhaps did not have an access to an ironing board during his two weeks banged up, a crumpled blue T-shirt and green shorts (where he kept both hands at all times even when at the microphone) the best he could manage.

Parents of all teenagers will recognise the description and it serves to remind us only that, outstanding sportsman that Sinner already is, it is really all very new.

De Minaur has been around a little longer but he and his foe have long been hitting partners. Demon knows he does not possess a rocket serve or forehand and has adapted his game accordingly.

No one surely fights, trains  or scrambles harder and he has bought into the Hewitt psyche of giving everything on every point and more, if possible, when his country is involved.

It is unfair to label him a mini Lleyton, yet it is a compliment too. Both men you feel would be proud of the association.

Demon likes his mates and likes his coffee, crossing from his Docklands hotel to get to his favourite South Yarra coffee haunt yesterday morning for breakfast.

He is a good man to have in your camp but yesterday was a touch short in all departments. When Sinner won the first-set tiebreak when it was still hot, it was evidently not to be Demon’s day.

Breaks early in sets two and three compounded not only the result but the Sinner dominance. They play similar games only yesterday, on the big stage, the younger man did it better.

“The match changed drastically as the shade came in and conditions weren’t as hot. He was able to let loose, it made it harder for me to counteract that,” de Minaur said.

“He started to lift his level as the court went into shade and the sun went. He was able to hit through the court a lot more.”

There is another Aussie hope on Tuesday when world No.1 Ash Barty takes on Jessica Pegula (seeded 21) on RLA at 7pm.

The 27-year-old Pegula has just one singles title to her name, as opposed to Barty’s 14, but the American’s leap in confidence from reaching the last eight 12 months ago has led to her general play ‘skyrocketing’ says Barty.

“She’s a great competitor. One of her best attributes is the fact that she can compete point in, point out, and irrelevant of the score she’s able to turn up time and time again,” said the Aussie who invariably looks for, and promotes, her opponents’ better qualities.

“Her ability to absorb pace and then add to it when she wants to is exceptional. It’s going to be a challenge for me to try and push her off that baseline and make her uncomfortable and feel like she has to create.

“But I know that she’s also going to be doing the exact same thing to me and trying to make me uncomfortable. That’s the chess game that we play. And that’s about all there is to it.”

They have met just once before, in the first round of the 2019 French Open, a tournament Barty won.

And don’t forget the Nick Kyrgios and Thanasi Kokkinakis show. Into the quarter-finals of the men’s doubles they are back on their new favourite court, Kia Arena, about 3.30pm on Tuesday.