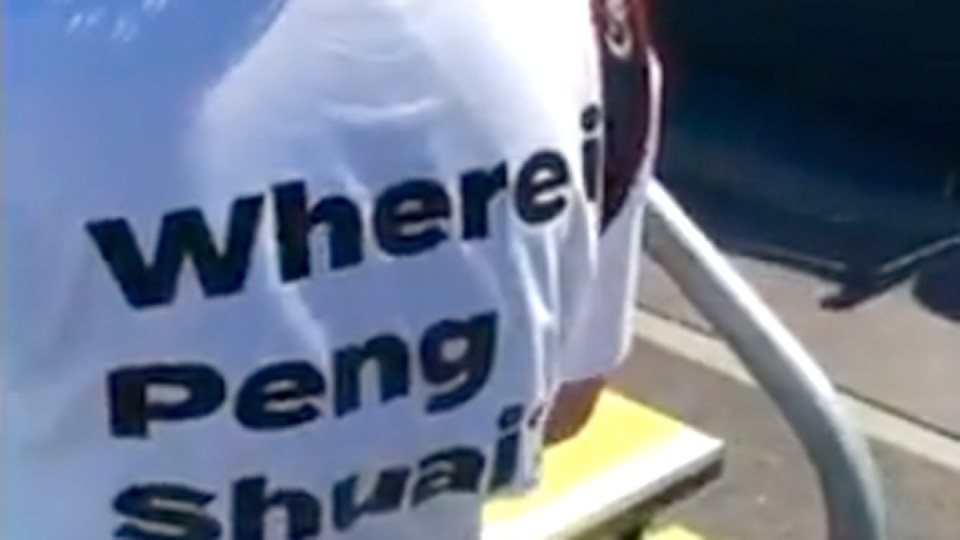 Activists wearing these T-shirts were banned from Melbourne Park at the weekend. Photo: Twitter

Tennis Australia has backed down on a controversial ban on fans wearing “Where is Peng Shuai?” T-shirts at the Australian Open – as long as they are peaceful.

TA boss Craig Tiley told AFP activists would be allowed to wear T-shirts expressing concern for the Chinese tennis player, following a backlash after astonishing footage emerged at the weekend.

“Yes, as long as they are not coming as a mob to be disruptive but are peaceful,” he said on Tuesday.

The backdown came after one of the legends of the sport, Martina Navratilova, blasted Australian Open organisers as “cowardly” after extraordinary scenes when officials removed banners and T-shirts emblazoned with the message from fans.

Peng’s well-being became a matter of concern among the global tennis community in November when she appeared to allege that a former Chinese vice premier, Zhang Gaoli, had sexually assaulted her.

After that post, she was absent from public view for nearly three weeks.

Last month she said she had never accused anyone of sexually assaulting her, and that a social media post she had made had been misunderstood.

The WTA suspended tournaments in China due to its concerns over Peng’s safety.

On Monday night, TA issued a statement saying “Peng Shuai’s safety is our primary concern”, but defended its stance on the banners and clothing because the Open does not allow political statements.

But 18-times grand slam winner Navratilova accused it of “capitulating” to China and putting sponsorship money ahead of human rights concerns.

“I think they are wrong on this. This is not a political statement, this is a human rights statement.

“[Tennis Australia is] just really capitulating on this issue … letting the Chinese really dictate what they do at their own slam. I just find it really weak.”

Also on Monday, Peng supporters in Australia said they were planning to hand out 1000 “Where is Peng Shuai?” T-shirts at Melbourne Park this week after raising more than $10,000 on a GoFundMe page.

“We can see how many match-goers that they can stop,” activist Max Mok told ABC Radio.

Mr Tiley told AFP the whole issue had been “a bit lost in translation”.

“The situation in the last couple of days is that some people came with a banner on two large poles and we can’t allow that,” he said.

“If you are coming to watch the tennis that’s fine, but we can’t allow anyone to cause a disruption, at the end of the day.”