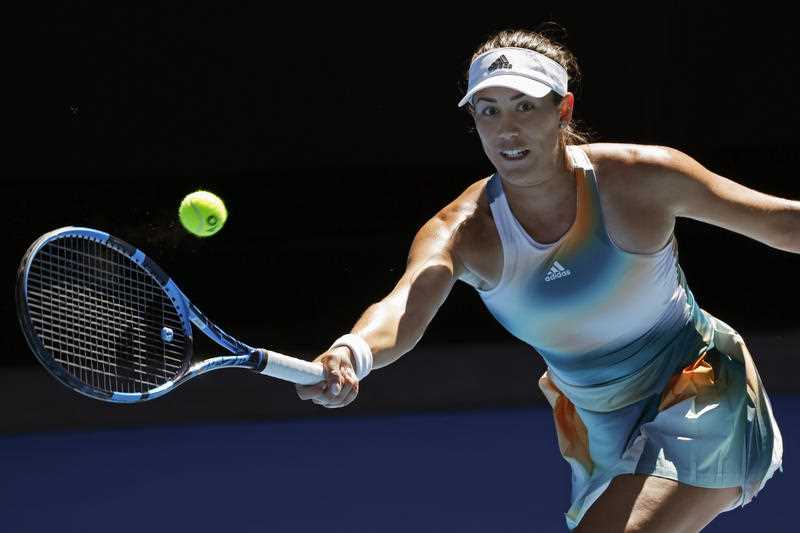 Alizé Cornet has knocked third seed Garbine Muguruza out of the Australian Open in the second round. Photo: AAP

Top seeds have tumbled out of the Australian Open in a tumultuous fourth day – with one Australian leading the day’s giant-killers.

Tauson surprised even herself with a 6-2 6-4 second-round win over Kontaveit before Cornet sent 2020 Australian Open runner-up Muguruza packing minutes later on Thursday.

The Spaniard was clearly lacking intensity, and Cornet took advantage, fighting back to break her serve twice more before claiming the match 6-3 6-3.

It should have been a breeze for Muguruza, who has found success at Melbourne Park in previous years.

Muguruza said her preparation for the tournament was less than ideal. An outbreak of COVID among her team had separated them for 15 days at the start of the year.

“It’s been a pretty stressful start to the year with my team. They all got COVID at the start of the year … so it was tough for my preparation,” she said.

“A little bit surprised about my level, a little disappointed too.

“My serve wasn’t there, my shots weren’t there also … I feel like she was dominating some of the young points. I think in general, my game wasn’t there.

Cornet, who has been on tour for 16 years, said her “state of mind was perfect” heading into the match.

“I feel amazing. I played a good match,” she said.

“In two days it’s my birthday, so I think that’s the biggest gift I can give myself.”

“I really hope the journey is going to go even longer for me.”

Cornet will next face either 29th seed Tamara Zidansekvs or world No.100 Heather Watson.

It was a gruelling first set for the pair, who battled it out under the scorching sun for 84 minutes.

The set was tooth and nail, with O’Connell able to hold his serve until his fourth service game.

He refused to throw in the towel, fending off multiple break points and breaking the Argentinian back to level the score 5-5.

Schwartzman remained sharp, proving he was able to read O’Connell’s moves like a book.

But even his experience couldn’t outmatch O’Connell’s agility or the harsh Melbourne sun. Schwartzman couldn’t play to his usual standard – he took to the shade to rest numerous times, with his shirt soaked with sweat.

O’Connell took the first set after a tight tie-breaker, and kept his calm and composure into the second and third sets.

Remaining ruthless and concise, O’Connell kept barrelling the ball at Schwartzman, while the sweat-soaked Argentinian rarely broke free from the baseline.

O’Connell will next face American Maxime Cressy in the third round.

Former world No.4 Samantha Stosur has played her final match at the Australian Open, and the final of her singles career.

Melbourne Park bid farewell to one of the true veterans of the tour as Stosur succumbed to 10th seed Anastasia Pavlyuchenkova.

Stosur had extended her singles retirement with a rousing first-round comeback win over American wildcard Robin Anderson on Tuesday.

The Melbourne Park crowd came out en masse to again support the Aussie.

“I’ve done more than I ever thought was possible,” an emotional Stosur told the crowd after the match.

“I dreamed of winning a grand slam, so to do what I’ve done after dreaming as a little kid is phenomenal. I couldn’t ask for any more.

“I’ve had many great moments here in Australia and around the world so it’s been amazing.”

Stosur’s singles career stretches over 20 years, having turned pro in 1999 at the age of 17. She’s the equal record-holder for the number of Australian Opens played, with the 2022 tournament marking her 20th entry.

Stosur will continue to compete in this year’s women’s doubles and mixed doubles tournaments.

Local wildcard Maddison Inglis was another to have a triumphant day, overcoming a second-set blip to oust American qualifier Hailey Baptiste 7-6 (7-4) 2-6 6-2.

The atmosphere was electric on Margaret Court Arena as the 24-year-old took control in the third set against Baptiste.

After clinching the victory, Inglis fell to her knees and shook her head in disbelief.

“This is so special, just playing on this court in front of this crowd,” she said.

“I can’t believe it at the moment.

“This is my favourite court; the best court I’ve ever played on.”

In another big opportunity, Inglis’s third-round opponent will be either Estonia’s Kaia Kanepi or Czech Maria Bouzkova. Both are unseeded.

Aryna Sabalenka has battled past a stubborn opponent and her own serving demons to advance to the third round of the Australian Open.

The world No.2 overcame an extraordinary bout of the serving yips to clamour into the Australian Open third round in Melbourne.

Sabalenka coughed up 19 double-faults, including five in the opening game of the match, in a jaw-dropping 1-6 6-4 6-2 win over world No.100 Xinyu Wang on Thursday.

After escaping with a tight three-set first-round win over Australian wildcard Storm Sanders on Tuesday, Sabalenka revealed former Wimbledon finalist Mark Philippoussis had been assisting her with her serving.

But it certainly didn’t look like it against Wang.

The Belarusian spent much of the match screaming and gesturing to her courtside box as she lost all rhythm and confidence.

The second seed had to break Wang in the sixth game just to avoid a first-set bagel.

But three more double-faults followed in the next game as Sabalenka surrendered the set in 33 minutes.

Limiting her doubles to three in the second set, Sabalenka fought back to level the match at a set apiece.

Despite being broken three times and committing four more double-faults in the deciding set, Sabalenka somehow prevailed after one hour and 54 minutes to stay in the hunt for a maiden grand slam title.

Top seeds tumble out of the Australian Open