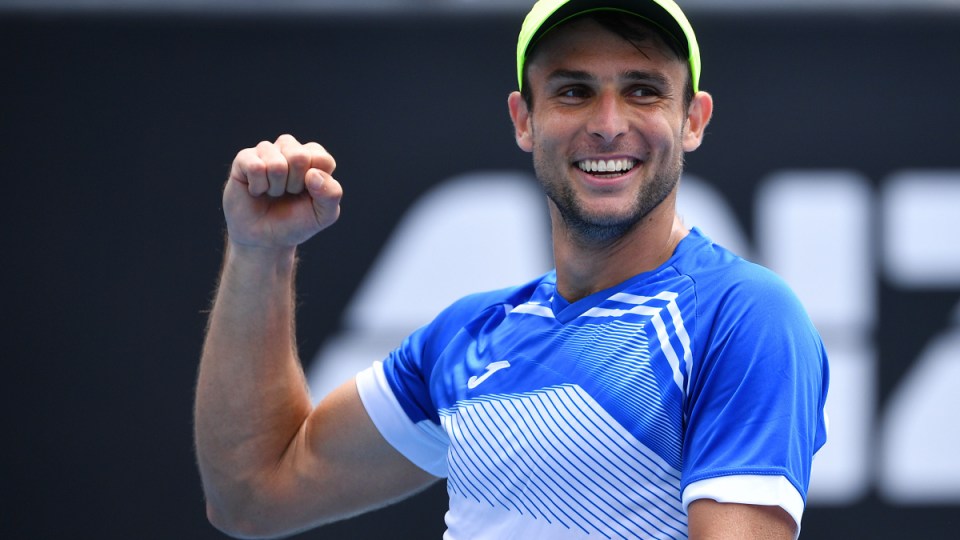 Wildcard Aussie entry Aleksander Vukic has snagged a massive upset on day one of the Australian Open.

All eyes were on Vukic, with the Australian having secured wildcard entry into this year’s tournament. Ranked 160th, he lined up against Harris, the world No.31 on Show Court 3.

Vukic, 25, was knocked out in the first round of the 2021 Open, falling to 19th seed Karen Khachanov. This year, however, is already a different story.

Harris took the first set, but the Sydneysider soon stormed back to register the next three sets and eventually prevailed against the South African.

It continued a good recent run of form for Vukic, who reached his first ATP Tour quarter-final last week in Adelaide before bowing out to eventual champion and fellow Australian Thanasi Kokkinakis.

The crowd at Melbourne Park was on Vukic’s side, with loud roars for the Aussie heard across the venue.

Vukic said he would “treasure this moment for the rest of my life”.

“I came here as a kid and was watching the Aussies play here, so to play myself and actually get the win – I can’t put it into words, ” he said.

Vukic’s maiden grand slam main draw win also has a lucrative upside. He will face Moldovan Radu Albot, the world No. 123, in the second round – and is guaranteed $154,000 in prize money even if he loses.

Reigning women’s singles champion Osaka knocked off Colombian Camila Osorio in their first-round clash – though the match wasn’t without a hitch for the reigning champion.

Osaka had a defiant start, securing the first five games, approaching the net to pressure the world No.50.

But Osario found her momentum and managed to hold Osaka for a further three games, pushing her to make a flurry of unforced errors before eventually securing the set.

It was Osorio’s first time on court at the Australian Open – with Osaka mentioning her research was limited, but was impressed by Osorio’s fighting spirit.

“I didn’t really have much information on my opponent,” she said.

“I thought she played amazing. She was fighting for every point. I think that’s a really good quality. I’m sure we’ll see her on this court pretty frequently. ”

Osaka also gave the crowd a couple of giggles during the match. At one point, she mis-hit a smash shot, and soon after accidentally hit the chair umpire’s sun shield.

Having released a new collection just days ago with Nike, Osaka walked out on court in a hot-pink and aqua dress.

Osaka hesitated when initially asked about the design, saying that “may be a question for Nike”.

Eventually, she eventually shed light on the inspiration.

“Apparently there’s asymmetrical lines and it’s meant to represent the Melbourne skyline and the city.”

As defending champion, Osaka is no doubt a tournament favourite – next to Aussie golden girl Ash Barty.

It will be the first time Barty has played at Melbourne Park since nabbing her second grand slam singles title at Wimbledon in July.

Tsurenko will need to work hard to make ground against the world No.1 with the ‘Barty Party’ sure to be roaring in the background.

If the early rounds of the tournament go to plan for both Osaka and Barty, the two are likely to clash in the fourth round next Monday.

Sakkari’s back in the game

Sakkari was calm and collected in the first set, forcing Maria to dart around the court with her sharp placement

Maria picked up the pace in the second set, prompting a spike in Sakkari’s unforced errors.

Sakkari escaped a break point from Maria in the eighth game, bringing home the win after a tiebreaker 6-4 7-6 (7-2).

Sakkari crashed out in the first round of the Open in 2021 before ending the season inside the top 10 for the first time.

“We all know first rounds are not that easy,” said Sakkari.

“Credit to Tatjana; she really played a great match. She has a very weird game in a good way. I found it really tough to find my rhythm against her.”

Sakkari admitted she was a “little bit stressed” opening the tournament on centre stage.

“I was a little bit stressed because I was opening up this tournament on this wonderful court. It’s a privilege,” she said.

“I’m very glad that I was able to find a way to win and to keep myself in the tournament.”

Rafael Nadal’s game against USA’s Marcus Giron is underway, with the Spaniard currently headed for a straight-sets victory, the score now sitting 6-1 6-4.

The Spaniard is 6th seed this tournament, being the only previous Australian Open winner in the men’s singles pool.

Kenin struggled to defend her title in 2021, bombing out in Round 2 against unseeded Kaia Kanepi in straight sets.

The 11th seed will surely be hungry for victory, but will likely struggle against Madison Keys – hot off her victory at the Adelaide International.

He will be back on court on Monday night to start his Australian Open campaign against German Yannick Hanfmann.

The Aussie has battled with injury since 2018, preventing him from regularly competing.

However, with a promising start to the new year, Kokkinakis is definitely one to watch.

An Australian Open semi-finalist in 2020 and having made the quarter-final in 2021, Zverev is definitely one of the most talented players on the circuit.

Zverev is yet to lock down a grand slam title, but with Djokovic out of the running, 2022 may be his year.