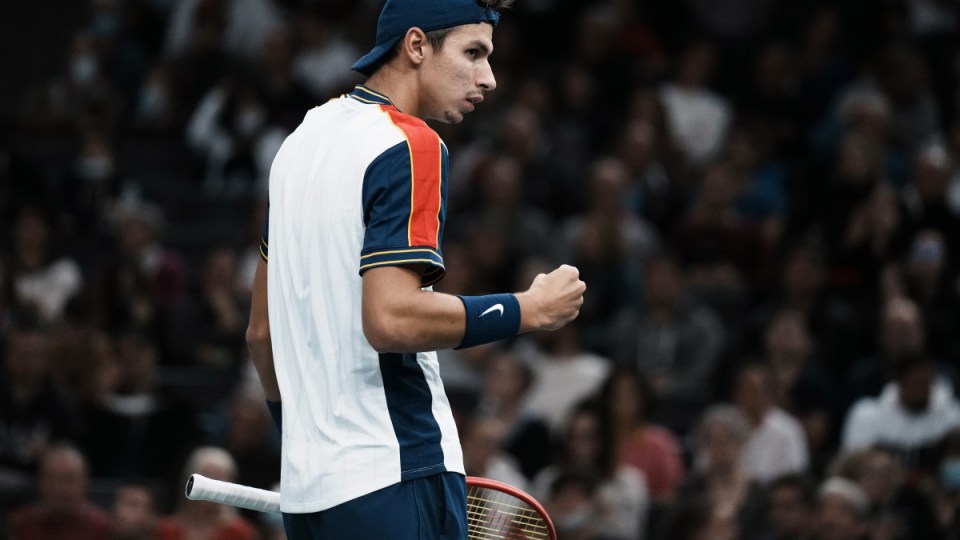 Alexei Popyrin is one of two Australians in the last 16 of the ATP Tour's Paris Masters. Photo: AAP

Alexei Popyrin and James Duckworth have set up a fascinating all-Australian duel at the Paris Masters with the pair having more at stake than just the prospect of a quarter-final spot in one of the ATP Tour’s biggest tournaments.

Popyrin’s victory over Stefanos Tsitsipas, which came when the Greek star had to retire at 4-2 down with an arm injury, has earned him a chance to prove why Australian captain Lleyton Hewitt was right to pick him ahead of Duckworth for the upcoming Davis Cup finals.

Duckworth, whose resurgence this season has seen him rise to no. 2 in the Australian men’s rankings, has made clear his disappointment at being overlooked by Hewitt.

After defeating Italian young gun Lorenzo Musetti 6-3 3-6 6-3 to ensure he’s set to enter the world’s top 50 for the first time next week, Duckworth will doubtless relish the chance to take on his fellow Sydneysider Popyrin in the last 16.

Popyrin’s day was short and dramatic, the 22-year-old playing some brilliant tennis in the opening exchanges of his second-round clash with world No. 3 Tsitsipas.

Yet after wincing in pain on one forehand as he lost his serve in the sixth game, Tsitsipas called for the physio, clutching his right arm.

It didn’t take long for him to offer his hand to world No.71 Popyrin after what had been 27 absorbing minutes.

Tsitsipas, who wouldn’t reveal the exact nature of the injury, said he’d been suffering from arm trouble for “quite a while” and retired to protect himself before this month’s ATP Finals in Turin.

“I haven’t retired once in my life, and it was something that I had to do today,” he said.

Still, Popyrin, who only made the main draw as a lucky loser, could savour his own encouraging form which saw him win all 11 points behind a booming first serve.

“I know it’s a big disappointment for Stefanos, I just hope he recovers,” Popyrin.

“But as for me, I’ve definitely made progress this season.

“I started off really well with my first title (in Singapore) and then kind of died down a little bit in the grass court season and US hardcourt swing.

“But now I feel I’ve got my mojo back. I’m improving day by day, relaxing and playing some of my best tennis again.”

Duckworth is also in the form of his life, his victory over Musetti coming after he’d disposed of 14th-seeded Roberto Bautista Agut the previous day.

Winning 84 per cent of his first serves and nailing 11 aces, Duckworth took every opportunity to go on the offensive against teenager Musetti.

The head-to-head between ‘Ducks’ and ‘Poppy’ stands at 1-1, though they’ve never met at full Tour level.

In other results, second-ranked Daniil Medvedev and world No.4 Alexander Zverev both eased into the last 16 while Norway’s Casper Ruud, Poland’s Hubert Hurkacz and Briton Cameron Norrie all advanced to maintain their push for one of the two remaining spots in the end-of-season eight-man ATP Finals.