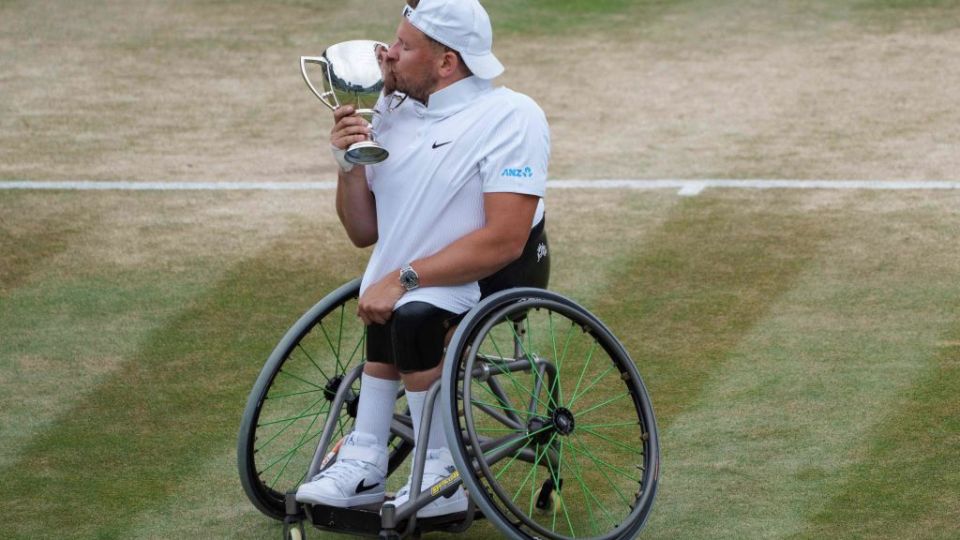 Dylan Alcott kisses the winner's trophy after winning against Netherlands' Sam Schroder in the final of the Quad Wheelchair Singles. Photo: Getty

Australian wheelchair tennis king Dylan Alcott has made a supreme defence of his Wimbledon quad singles crown, moving ever closer to a potential calendar year “golden slam” of titles.

The Melbourne star landed his third grand slam triumph of the year on Saturday, following his successes at the Australian Open and recent French Open, with a 6-2 6-2 victory over his biggest current rival, Dutchman Sam Schroder.

Now the 30-year-old will go on to Tokyo for the Paralympics and then hope to complete the five-title “golden slam” at the US Open.

The 21-year-old Schroder is the only man to have beaten Alcott this season and was confident of repeating his recent triumph over the Aussie at last month’s French Riviera Open.

Yet the Australian was at his sharpest as he picked up the 14th grand slam singles title of his glittering career, breaking the left-hander Schroder three times in the opening set and three in the second for a comprehensive triumph.

Demonstrating more flair and touch than the Dutchman, especially with his drop shots that constantly caused Schroder problems, Alcott again showed why he’s become a firm favourite with the Wimbledon crowd with his shows of emotion and virtuoso shot-making.

After he’d wrapped up his victory in 67 minutes, Alcott, ever the showman, spun around in his wheelchair on No.3 Court to the delight of a crowd that featured a small but noisy Australian contingent.

Labor victory fires up Tamil family’s hopes of return to their Biloela home
Perth residents urged to play it safe as massive storm rolls across region
Joe Biden says he’s not fussed by North Korea’s rumoured return to nuclear tests
ACTU hails Labor’s triumph as the first step to pay raises
Analyst: Sharemarket will be anxious about a Labor pact with Greens
French foreign minister hails defeat of Morrison and his ‘notorious incompetence’
‘Nothing short of a miracle’: Teary Ash Barty triumphs at Wimbledon in rollercoaster match
Today's Stories