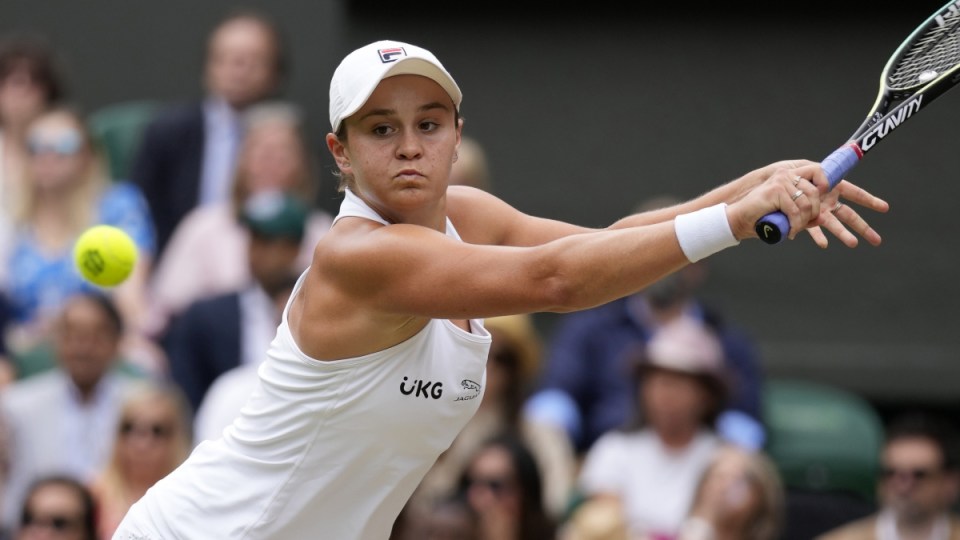 Ash Barty will be favourite in the US Open that starts on Monday. Photo: AAP

Ash Barty’s animal instincts to “hunt” and gather trophies will override any anxieties and nerves as she chases tennis’s greatest prize on Saturday night.

That’s the hope and belief of her esteemed mind coach Ben Crowe, who has been hugely influential in Barty’s inspired rise to world No.1 following an 18-month hiatus from tennis five years ago.

Barty has thrived following Crowe’s simple philosophy of competing, have fun and play and he won’t be offering any other pre-match message despite acknowledging that a Wimbledon final is a different ball game than any other she might ever confront.

“Don’t get me wrong, compete is social Darwinism – kill or be killed on the tennis court,” he said while backing Barty’s ferocious competitive streak to shine through against big-serving Czech Karolina Pliskova.

“She has got the most extraordinary desire and appetite to compete and win and to find a way through.

“In my opinion the work that she and Tyzz (coach Craig Tyzzer) do before matches to almost solve the puzzle and find a way through and how to break down competitors’ games to create opportunities for themselves, is absolutely her primary desire.

“So I don’t really need to say anything in that regard because she has such a motivation based on competing, fighting and hunting.

“She would be one of the most competitive athletes I have ever worked with – that is intrinsic. I don’t have to do anything.

“Talk to her dad. At five years old, she was smashing things around the house with tennis balls. It is the same with golf, the same with cricket.”

Barty’s ruthless streak and ability to “solve the puzzle” is reflected in three telling stats: the world No.1 is 13-2 in three-set matches this year, has won 19 of her last 22 matches that have gone the distance and she has prevailed in 11 of her past 14 three-setters against top-10 rivals.

Crowe believes Barty is able to play so clutch under pressure because she has learnt to accept that “playing tennis is what she does but it’s not who she is, it doesn’t define her”.

“She can get perspective that at the end of the day tennis is a game,” he said.

Another key factor in Barty’s charge to the final despite an injury-plagued and uncertain Wimbledon build-up, says Crowe, has been the 25-year-old’s acceptance that her preparation was always going to be somewhat compromised.

“First and foremost was the prioritisation of around her body – focus of recovery and the recuperation,” he said.

“Accept the fact that it was going to be a different approach to Wimbledon this year without the lead-in tournaments and to accept that she just has to find a different way through.

“There is no such thing as a perfect preparation, they are all different – the conditions for every match are different as well.

“Once she was able to accept that and let it go, she could focus on things she could control and her ability to get to the best physical state for this event been extraordinary from a month ago to where we are now.”

For her part Barty said she’s “rapt” about having an opportunity to emulate the great Indigenous trailblazer Evonne Goolagong Cawley.

Barty will become the first Australian woman since her mentor Goolagong Cawley, who won her second title in 1980, to take the biggest prize in women’s tennis.

“It’s a really special anniversary for Evonne and I couldn’t be more proud to be in a position to wear an outfit inspired by her,” Barty said as she prepared for her second grand slam final following her 2019 French Open triumph.

“Now, to give myself a chance to create history in a way that’s a tribute to her, is really exciting. I couldn’t be more rapt to have that opportunity on Saturday.”

Barty, a Ngarigo Indigenous woman who grew up in Queensland, believes it’s her absolute privilege to be honouring her Wiradjuri friend from New South Wales in a match that the world will watch.

As she’s done through a tournament during which she’s dropped just one set, she’ll again be wearing her own version of the famous scalloped dress that the then 19-year-old Goolagong wore when beating fellow Aussie Margaret Court in the 1971 final.

“Her most iconic dress is something that inspired me and inspired our generation of indigenous youth,” said Barty, who’s been winning a whole host of new overseas fans this fortnight with her elegant tennis just as Goolagong won over Britain 50 years ago.

“I hope that my version of it, my outfit, can do the same for the next generation of indigenous youth.”

It’s a tribute that has moved the pioneer, who’ll turn 70 at the end of this month.

“Wow, it just blows my mind,” said Goolagong Cawley, who gave her own seal of approval to Barty’s design. “What a wonderful thing to do, what a wonderful honour. It’s truly fantastic.”

The final starts at 11pm AEST.

Coach predicts Ash Barty will hunt down her Wimbledon dream