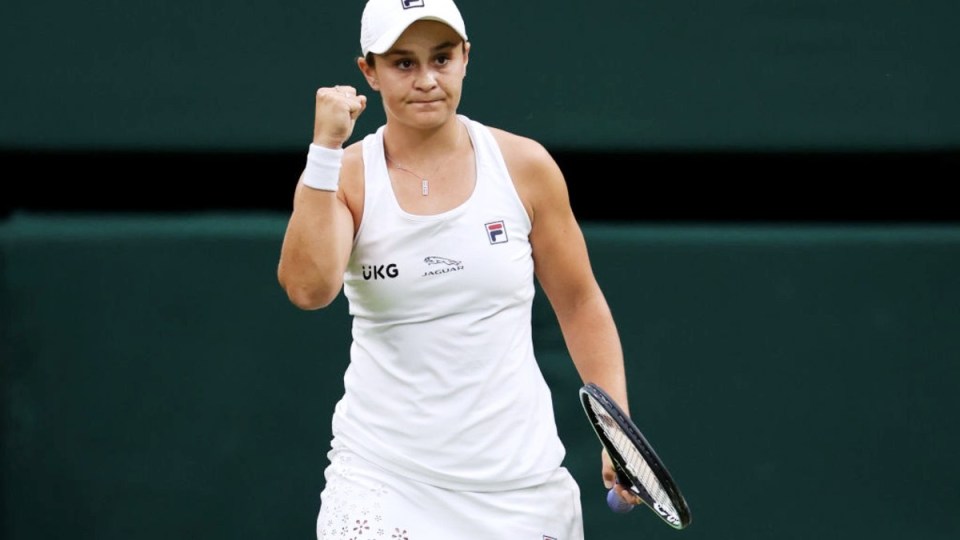 Ash Barty is aiming for a first Wimbledon singles title.

When Ash Barty’s four-year-old niece Lucy wakes up, the first thing she usually asks is ‘did Aunty Ash win at the tennis?’

Well, on Friday morning, Ash’s sister Sara will have been able to tell the little one: “Not bad … she’s just reached the final at Wimbledon!”

Fresh from her glorious semi-final win over Angelique Kerber at the All England Club, Barty revealed on Thursday that the best thing in her day while over the other side of the world is that moment she can text and chat with her loved ones back home.

Yet it’s typical of the grounded superstar that Barty wants know just as much about their day as they want to hear about her beating the world at tennis.

Barty’s progress to her first Wimbledon final is the most significant milestone yet on a tennis world tour that’s been largely triumphant but has had its down moments.

“There have been days when it’s been challenging,” admitted Barty. “Every day, I genuinely miss my family and miss being able to share this with them.

“But I know they’re watching, I get to chat to them every day and having to be away from an extended period gives me the opportunity to do what I love. It’s about looking at it from that perspective.

“But I do know that when ‘Luce’ wakes up every morning, she asks my sister how Aunty Ash went, ‘was she the winner?’.

“I get a message when I come off the court from my sister and my family, they’re genuinely excited to tell my niece and nephew how I played overnight – and that’s what fills me with joy.

“That’s what makes me smile, the fact I get to speak to them and tell them about my day, which is no different to anyone else.

“Each and every day I ask how their day was and they ask me how my day was – and I think being able to keep that really normal is one of the best parts of my day.”

Remaining so grounded while her global fame keeps soaring is one of Barty’s many outstanding traits.

Asked how she manages it, she shrugged on Thursday: “For me, it’s more about an attitude than anything.

“It’s about understanding that you don’t get to play tennis forever, you don’t get these opportunities every single day and genuinely having that childlike, carefree kind of playfulness is really important.

“And even though I’m extremely professional and serious and driven and impassioned about my career, it’s also important to back off sometimes and just enjoy it and try to smell the roses on the way and take it all in.

“It’s not all about the destination. It’s all of the nuances, the silly nuances, the memories that come from the journey which are what make it so special. Being able to appreciate those every day is massively important.”

‘Did you win at the tennis, Aunty Ash?’