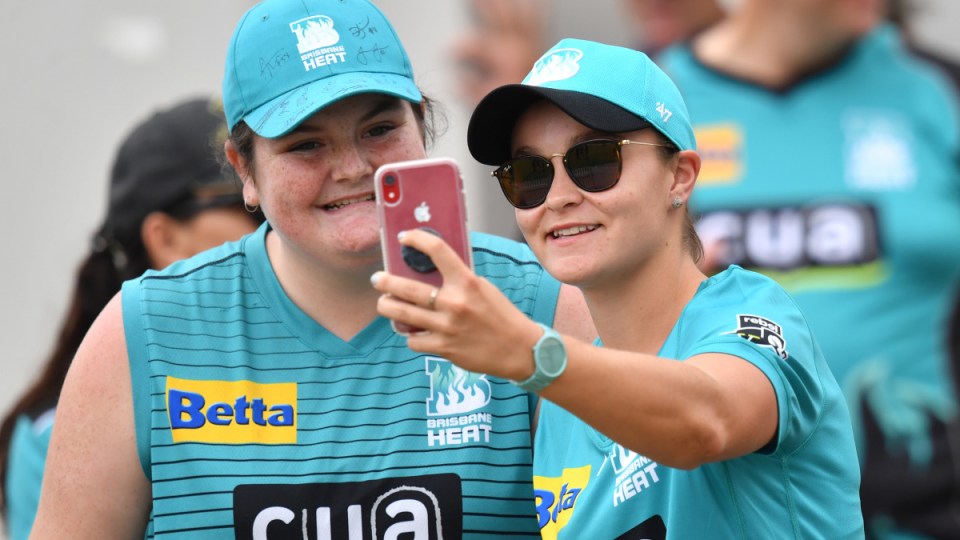 Twenty-five years after capturing her seventh and final Wimbledon women’s crown, Steffi Graf won’t be the least bit surprised that Ash Barty is chasing her first at The All England Club on Saturday night.

Graf could see the twinkle in Barty’s eyes, the extraordinary hand-eye skills and court craft from the moment she and eight-times major-winning hubby Andre Agassi welcomed the precocious young talent into their Las Vegas home 11 years ago.

Graf, the 22-times grand slam champion, sensed Barty had it all.

Of course she did.

For why else would a 14-year-old from the other side of the world even earn an invitation to join tennis’s most successful and celebrated couple for a starry-eyed week without possessing such class and promise?

Barty was a VIP guest of the esteemed adidas player development team and also received specialist tuition from Agassi’s former mentor and fellow Australian Darren Cahill while bonding with the great Graf at a baseball game.

“She came over with her coach and her fitness trainer. She was there to meet Andre and Stef. She wasn’t there to meet me,” Cahill said.

“Stef is the nicest girl in the world and she made her feel at home, nice and relaxed, and I’m sure Ash will have some great memories of that.”

“She was brilliant back then for her age,” he said.

“The opportunity to watch her play, the versatility in her game, the way she handled pressure and expectations back then, you could just tell straight away that if she wanted to continue down that path and put the work in she was always going to be a star.

“There was never any question about that.”

Graf, too, was taken aback by Barty’s silky game at such a tender age and, more than a decade later, still takes a special interest in Australia’s tennis marvel.

“She hit some balls with Stef and Stef was really impressed with her and Stef knows talent when she sees it,” Cahill said.

“So she quite often, years after, would ask how Ashleigh was going and how her progress was going because she was such a good tennis player, she had great hands and she played differently to a lot of the younger players back then as well.”

And, tellingly, Barty was prepared to put in the hard work.

“This trip has given me a lot of confidence and self-belief and has made me realise how I need to work and what sacrifices I must make in order to be a great tennis player,” she said at the time.

But, at 18, she was mentally burnt out after making the ultimate sacrifice of all: leaving the comfort and security of her family home.

Depressingly homesick and suffocating under crushing expectations, the so-called next Martina Hingis walked away in September 2014.

The shy, gifted teenager dropped the bombshell after a first-round US Open loss, trading the grind and isolation of the professional tennis circuit for the camaraderie of women’s cricket and the Brisbane Heat dressing room.

Incredibly, having never hit a ball outside her backyard, Barty made a stunning cross-sport transition.

So exceptional with the willow that Queensland women’s coach Andy Richards reckoned the all-round sporting super talent could easily have been playing the Ashes series against England alongside Ellyse Perry, Meg Lanning and the like.

Few back then could have imagined Barty instead trading her cricket creams for her tennis whites and being on the cusp of Wimbledon glory following the dramatic 18-month hiatus.

“I wasn’t sure if it would ever happen, honestly,” Barty said.
“I’ve had ups and downs, and everything in between, and I wouldn’t change one day or one moment, or one route we’ve taken on my path.

“It’s been unique, it’s been incredible, it’s been tough, and I wouldn’t change one thing about it.

“I’m enjoying every single day that we get to come out here and do what I love, and being able to on the final Saturday here at Wimbledon is going to be just the best experience ever.”

And another memorable chapter in Barty’s already compelling career and life that also includes the 25-year-old winning her Brisbane golf club championship last September while sitting out another 11 months on tour during the coronavirus pandemic.

“It’s a great story for Australia and what she’s been able to achieve in the years since coming back,” Cahill said.

“I think we all get inspiration from it.”