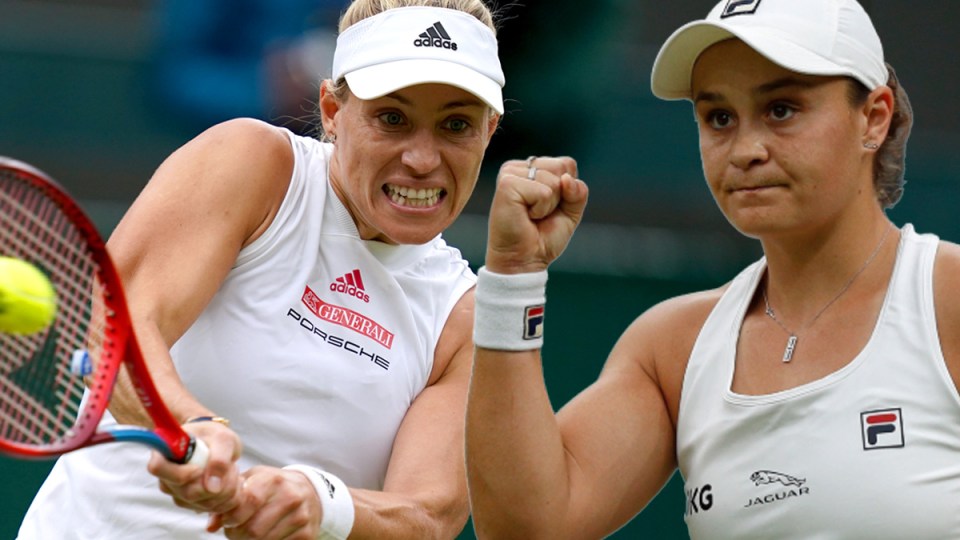 It’s not even the final – but Ash Barty still reckons her last-four Wimbledon date with Angelique Kerber will be the “ultimate test”, with Germany’s ex-champion back on the rampage.

After outplaying her Australian compatriot Ajla Tomljanovic in the quarter-finals on Tuesday (British time), Barty said she couldn’t wait for her next challenge against the rejuvenated 2018 champion.

She meets Kerber in the semi-finals at 10.30pm Thursday (AEST). It is the first time the No.1 seed has made the Wimbledon semis.

Kerber had almost begun to feel like the forgotten woman of tennis – a three-time grand slam champ who’d perhaps gone into irreversible decline at 33. But her recent comeback on Europe’s grass courts has re-alerted everyone at SW19 to the permanence of class.

The German hadn’t won two matches on the bounce since the 2020 US Open. Her victory on the grass in Bad Homburg leading into Wimbledon was her first tournament triumph since her magnificent victory over Serena Williams in the 2018 final.

Now she’s feeling intoxicated by Wimbledon again, having beaten Karolina Muchova – a semi-finalist at this year’s Australian Open – as comfortably as Barty beat Tomljanovic, to also make it into Thursday’s fifth showdown against her old Aussie rival.

“Now I’m back. I’m coming here after a really tough time. I was not playing good the last few months. Now winning a tournament at home, now playing well here again, that means a lot to me,” she said afterwards.

“I’m really looking forward to playing against Ash. We never played on grass court. She played so great the last few months, years. I know that I have to play my best tennis, and she will push me to that, to give everything out there.”

The feeling is mutual. They haven’t met for three years but their head-to-head record is locked at 2-2. Barty gave the former Australian Open champ and ex-world No.1 a nod, telling the Centre Court crowd: “It’s the ultimate test.”

“Angie has an incredible record here. She’s made multiple finals. She’s one of the best grass courters going around. I think the challenge of playing her in a semi-final of Wimbledon is an incredible opportunity, one that I’m really excited for,” she said later.

“It’s not scary or overwhelming, it’s just exciting. It’s exciting to have the challenge of playing someone who is comfortable on these courts, who knows how to win this tournament.”

Kerber also knows how to beat Barty in Australia, having three times defeated the national heroine on home soil, including one particularly wounding 6-4 6-4 loss in Sydney in 2018.

“I remember that match well. It was my first final in Australia. I remember coming off the court and feeling like my level was close, but it wasn’t good enough,” Barty said.

“There was that extra step that I needed to take to compete with someone of Angie’s calibre in the sense of she doesn’t give you cheapies.

“She competes for every single point. She’s won grand slams. She knows how to hang tough in brutal moments. That was almost a bit of a reset, knowing I’m not far off, but I’m not there yet.

“I think each time I’ve played Angie has been through different phases of my career. It’s been an exceptional challenge each and every time.”

Barty appreciates how her Wimbledon run, which has seemed to grow in authority with each round after losing just one set in her opening contest with Carla Suarez Navarro, is being followed back home, particularly by her family and friends.

“I love the fact that Australians at home, the fans, are able to get behind all of us that are here.

“But I don’t read the papers. I don’t see that white noise as such. I don’t read it. It doesn’t faze me. It’s not something that I focus on. It’s almost irrelevant to me.”

Barty ready for ‘ultimate test’ against old foe at Wimbledon