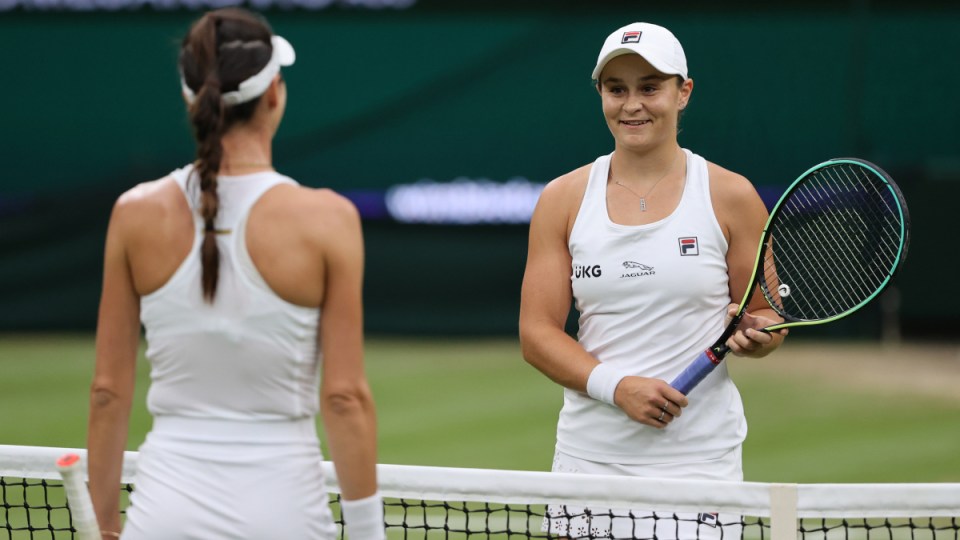 Ajla Tomljanovic is backing Ash Barty to go all the way to Wimbledon glory after discovering the hard way on the most hallowed court in tennis just how brilliant the world No.1 really is.

All the years and countless sessions they’ve had training together as Australian Fed Cup teammates never quite prepared the country’s No.2 women’s player to face Barty in a competitive arena.

Especially when that arena turned out to be Wimbledon’s Centre Court for her first-ever grand slam quarter-final duel.

So when the moment arrived on Tuesday, it proved a bit of a culture shock for Tomljanovic as she felt the true force of her friend in a 6-1 6-3 drubbing which was, in effect, a very expensive 66-minute lesson.

Driven to distraction, and then a touch of impotent fury, by Barty’s killer slice, well-directed returns and whipped forehand winners, it all made her realise why the Queenslander is the world’s best.

“Yeah, definitely much sharper in matchplay, in a competitive match, than she is in practice,” Tomljanovic said.

Asked what she felt about Barty’s chances of going on to become Australia’s first Wimbledon women’s champ for 41 years, she smiled ruefully: “Well, against me she looked pretty sharp….

“I do hope she wins it. It would make me happy to see her lift the trophy here.

“Yeah, I mean, I definitely think she’s the one to beat. Then again, once you get to the stage of semis, even quarters, everyone can be a contender in a slam.”

What impressed Tomljanovic so much was the way Barty dismantled her game.

“The match-up felt really bad from my side. Felt like she was neutralising my serve with the slice, which kind of set the tone for me and made me really uncomfortable
because it was hard to break her,” shrugged the world No.75.

“She was serving great, and the slice was just really hard to deal with.

“It felt a little bit, like, well, from the backhand side she’s slicing, which I’m not liking, and from the forehand she’s kind of moving me around the court. I was like, ‘Well, where do I go?'”

In the end, it all felt awfully deflating for a 28-year-old who actually needed to be celebrating the best week of her decade-long professional career.

Her boyfriend Matteo Berrettini and her dad, she reckoned, had both “almost got a little bit angry with me after the match” because she was so disappointed and couldn’t see the bigger picture, which is that she’ll now re-enter the world’s top 50.

“It’s not all bad. I do think I need to take it a little bit easy, learn from this today, use it as an advantage next time to do better. There’s way more positives from these two weeks than negatives, surely.”

On Wednesday, she added, it would be her turn to support Berrettini as the No.7 seed tackles Felix Auger-Aliassime in the men’s quarter-finals.

The Italian will enter the match in good heart after spending the eve of the match in front of the TV watching his compatriots reach the European Championship soccer final with their penalty-shootout win over Spain.

Ash Barty the one to beat at Wimbledon: Ajla Tomljanovic