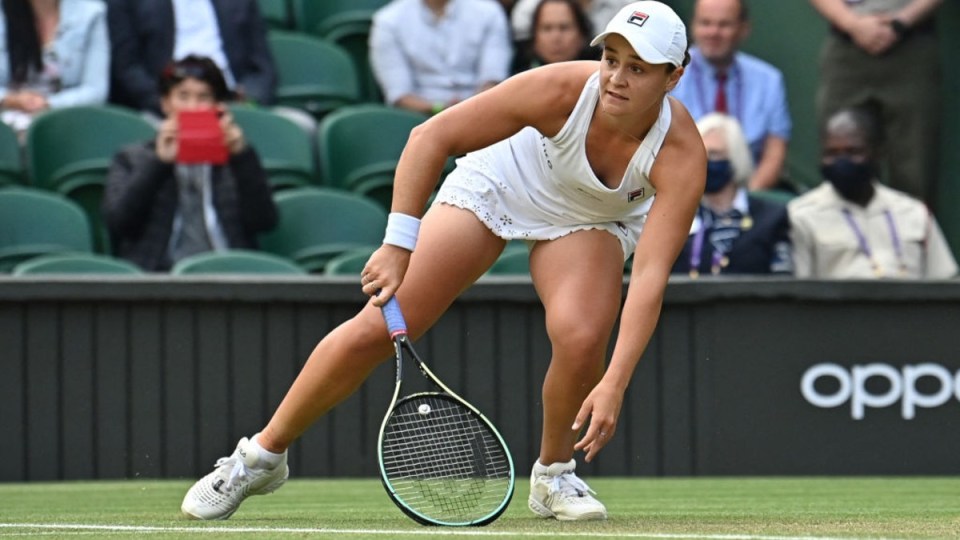 Ash Barty is beginning to make the Centre Court look like home sweet home, winning her third match of the week on the most famous court in tennis in a manner which stamps her as the woman to beat at this Wimbledon.

But a “devastated” Nick Kyrgios has waved farewell to a standing ovation after losing his battle with injury.

The world No.1 outplayed the potentially dangerous Czech Katerina Siniakova 6-3 7-5 on Saturday, stepping her game up a significant notch after two fairly comfortable but uneven performances against Carla Suarez Navarro and Anna Blinkova.

This was much more like it, with the Australian dominating a potentially tricky opponent and only stuttering with the winning line in sight, when she dropped her delivery for only the second time when serving for the match at 5-4.

After then earning an immediate break back, courtesy of a delightful drop shot-lob combination, Barty made no mistake second time around, the top seed getting the job done after one hour 37 minutes to earn a last-16 place here just as she had done in the previous edition in 2019.

“It certainly wasn’t going smoothly. It was a hell of a match, right from the first point,” Barty told the crowd.

“Katerina brought an incredible level. I knew I had to play very near to my best to be able to compete with her today. So happy to be able to play some good stuff.”

Barty had been put under a little pressure early on against the in-form Siniakova, who was fresh from having reached a grass-court final in Bad Homburg, and the Czech signalled the danger with an early break point.

But the Queenslander’s all-court mastery quickly saw her take control, a knifing slice cut just over the net which proved impossible for world No.64 Siniakova to dig out, earning her the crucial break for 4-2.

She delivered the second of her eight aces in the match to serve out the set to love, although Siniakova battled to stay with her in the second and provided a few nervy moments when she broke for 5-5.

“Another great challenge. I’m very privileged to be in the second week of Wimbledon again, genuinely one of my favourite weeks of the year,” Barty said.

“Barbora has been playing some incredible stuff and I’ve never played her before, so it’s going to be a new one.”

Roared on by a small but vociferous Australian contingent amid a crowd which was not as big as usual – unsurprisingly, with England’s football men just about to start their European Championship quarter-final tie against Ukraine.

Asked about her compatriots’ chants of support at the changeovers, she smiled: “It’s better than the English telling me the football’s on!

“This is the wrong season of football for us. The round ball when Australia’s not playing — excuse if this sounds a bit rude — but it doesn’t interest me!

Kyrgios suffered an “acute” abdominal problem that flared up during his last-32 match on Saturday, reducing his monster serve to half-pace against the brilliant young Canadian Felix Auger Aliassime and forcing him to quit in pain at one set-all.

After losing the second set with the match then tied at 6-2 1-6, he called for the trainer a second time, shrugged that he couldn’t go on and shook hands forlornly with his opponent after 56 minutes.

Yet Kyrgios, drowned by sympathetic applause from the fans, told them on court: “Having this support has kind of made me maybe have a second wind — I’m gonna come back and play for a bit longer.”

He was, he admitted later, “devastated” at the end of his latest odyssey.

“I’m enjoying myself. Going from the bad boy of tennis, all this stuff, to now one of the crowd favourites,” he said.

“I knew they wanted me to keep playing. I tried to give everything I absolutely could.

“But I knew the more I served, the worse it was getting. It was heartbreaking for me.

“I told the crowd it was the end of the road. It was a journey.

“I honestly thought the way I was playing I could have done some pretty cool things this week. It was tough to leave that crowd.”

He admitted it also didn’t look possible to continue his mixed doubles partnership with Venus Williams either, reckoning it would “heartbreaking” to have to tell the 41-year-old legend.

“She obviously won’t be too happy about it too. She doesn’t know how many Wimbledons maybe she’s going to play again,” he said.
The 26-year-old – in his first tournament after a five-month competitive absence – had said beforehand he would be competing in pain.

He began as only Kyrgios can, admitting that he’d forgotten to bring his tennis shoes to the court – which forced organisers to collect them from the bubble for him.

“For one day, I thought I was being professional, you know…,” Kyrgios laughed.

But once he’d found his feet, he blitzed the first set and felt he was dominating until he felt injury strike in the sixth game.

“I felt it specifically 4-1, 15-all. I hit a first serve and I felt a strain towards my left abdominal,” he said.

“That’s just the way it goes sometimes. Like, it’s funny because I woke up today feeling phenomenal.

In the second set, his devastating serve had effectively been neutered, allowing the 20-year-old prospect to start making huge inroads on the returns as he eventually took the stanza 6-1.

“He’s a hell of a player and he’s going to do some special things in this sport,” Kyrgios told his fans.

“You’ll see more of him in the future – and he’s better looking than me too!”

Jordan Thompson and James Duckworth had hoped to continue their breakthrough Wimbledon with more landmark victories but the Sydney duo both produced sub-par performances as they bowed out tamely in the third round.

There had been hopes they all might progress and that it would be the first time for 19 years that Australia had three men in the last-16 at a grand slam, with Lleyton Hewitt, Mark Philippoussis and Wayne Arthurs having made the Wimbledon fourth round back in 2002.

But Duckworth, who was playing in the last-32 of a grand slam for the first time, was the first to depart with his game having been picked apart by Italian world No.27 Lorenzo Sonego in straight sets 6-3 6-4 6-4.

The 29-year-old Duckworth reckoned his display, which saw him have his serve broken once in each set following two impressive wins earlier in the week, had been “rubbish”.

“I’d been hitting the ball well but I couldn’t feel the ball today – but that’s the way it was,” he shrugged.

“I can’t really give you an answer why I wasn’t near my best.”

Then Thompson, who was also looking to reach the last-16 for the first time, followed in similar vein, outplayed by Belarusian Ilya Ivashka 6-4 6-4 6-4 after being broken six times in all.

Kyrgios was later to pull out on Court No.1 with an abdominal injury after he’d won the first set 6-2 and, by now injury-hampered, had lost the second tamely 6-1.