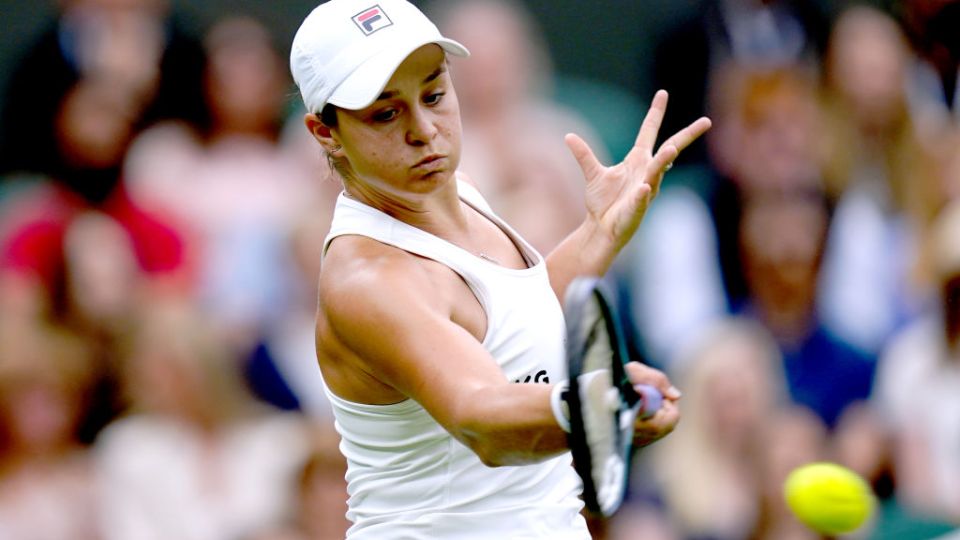 Ash Barty was cheered on by a full house at Wimbledon as she defeated Carla Suarez Navarro. Photo: Getty

Ash Barty has paid an elegant tribute to her heroine, saluted another great fighter across the net and felt the joy of a lovely win under Wimbledon’s Centre Court roof, all while being cheered on by a full-house.

It was, reckoned Australia’s world No.1, the sort of beautiful day that made closeted life in the tennis bubble completely worthwhile.

Wearing her own design based on the famous outfit that her mentor Goolagong wore when first winning the Wimbledon title 50 years ago, Barty had to fight off a sterling effort from the 32-year-old crowd favourite Suarez Navarro before winning 6-1 6-7 (1-7) 6-1.

Given the honour of opening proceedings on Centre Court on Tuesday (local time) with the reigning ladies’ champion Simona Halep out injured, it always promised to be an emotional occasion against an opponent on an inspirational comeback trail.

Despite a breeze of an opening set for Barty, which had been interrupted briefly by a rain stoppage which required the roof to be rolled out, Suarez Navarro made a fight of it as everyone – including the Aussie –knew she would.

The 32-year-old, who’s overcome Hodgkin’s lymphoma and was playing only her second match in 18 months in her farewell Wimbledon, made light of any competitive rustiness in the ‘indoor’ arena to roar back in the second.

She broke Barty when the Australian was serving for a straight sets win and went on to outplay the world No.1 in the subsequent tiebreak.

Yet the Queenslander regrouped effortlessly in the decider, playing the sort of stylish all-court tennis that the 1971 and 1980 champion Goolagong-Cawley, presumably watching back home in Australia, would have surely appreciated.

“She played a great tiebreak. She’s a hell of a competitor, a hell of a fighter, an exceptional person. She deserves nothing but the best, and I just said to her at the end, ‘It was a pleasure to share the court with you’,” Barty said.

“I kind of didn’t know what else to do. I wanted to give her a hug, say congratulations on an exceptional, remarkable career. I know she’s still got a little bit to go, and I wish her all the very best.”

For her first match back on the grass after a two-year absence and as a return to the fray after her hip injury that had forced her out of the French Open, this wasn’t a shabby return from Barty.

Indeed, when she instantly shrugged off the disappointment of losing the second set by taking the first 13 points of the third.

“Overall, happy to get a start here at Wimbledon, play that really solid match,” shrugged Barty on a day she reckoned she’d never forget.

She added: “The bubble is all worth it to be able to experience moments like today on a beautiful Centre Court.

“My first time playing under the Centre Court roof as well. When it was closing, Carla and I both were kind of looking, peeking outside and looking at it. It was just unbelievable.”