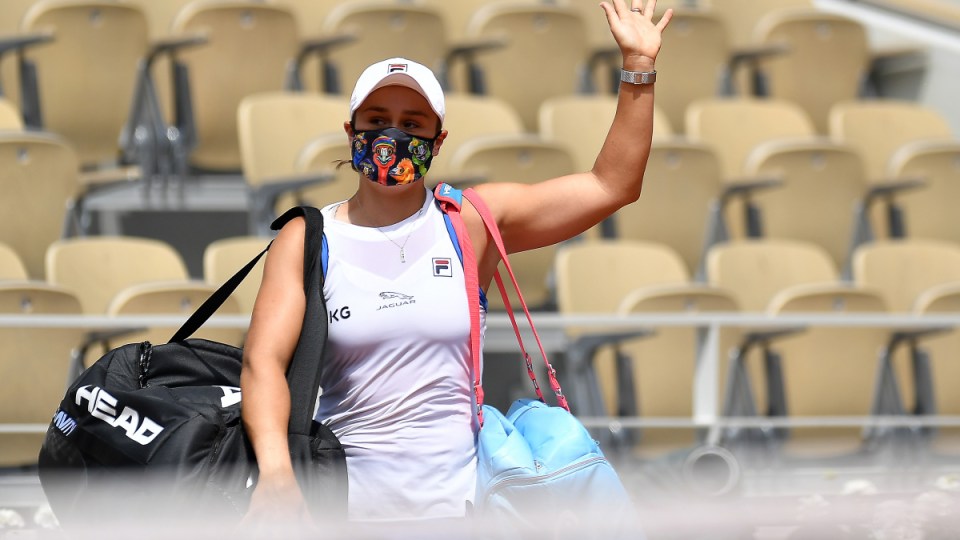 Ash Barty is looking to Wimbledon after being forced out of the French Open by injury. Photo: Getty

Ash Barty still hopes to be good to go for grass-court glory at Wimbledon, adamant that nobody in her camp is hitting the panic button yet after her Roland Garros injury exit.

Barty reckons she has shed some tears this past week but is putting on a brave face, despite her hip injury becoming so debilitating that she was forced to retire during her second-round match against Poland’s Magda Linette on Thursday.

There are still just under four weeks before the biggest tournament in tennis begins in London, the grass-court pinnacle that Barty has long enjoyed and feels suits her all-court strengths.

In 2019, she demonstrated her prowess on the surface with a pre-Wimbledon triumph at Birmingham that first took her to the world No.1 spot for a seven-week spell before she regained the accolade later in the year, never to relinquish it since.

Asked whether she felt she’d be fit to play in the London slam, Barty smiled: “Ah, I hope so. I really do. We do all the right things now, we continue to do the right things. Yeah, give ourselves the best chance.”

The great unknown remains the exact nature of the “acute” injury to her left hip. Barty said she had picked up during a training session when landing heavily after a serve.

“It’s a completely new injury, and something that I’ve never experienced before. Even chatting with my physio, it’s not something she has seen regularly either,” she said.

She said her team had consulted experts from around the world, hoping to gain insight into the best ways to treat the problem.

“I’m confident we do have a plan. It’s just that we ran out of time here,” she said.

“It’s disappointing but not panic stations. We know what’s going on. We just need time to manage it to get back on the court as quickly as we can.”

There was no time for sympathy from Barty’s rivals, though, as they sense a golden opportunity at a tournament where both the top two seeds have disappeared in the first week.

Indeed, none of the world’s top-ranked three players – Barty, Naomi Osaka and Simona Halep, the Romanian former champ who withdrew before the tournament started – are in the mix.

All of which looks as if it perfectly suits the on-song champion Iga Swiatek, who swept into the third round with a 6-1 6-1 trouncing of Sweden’s Rebecca Peterson on Thursday.

“You know, I don’t care that many seeds have pulled out or already lost. I’m just focusing on my next round,” Swiatek said, when asked about the absence of the big guns.

Barty’s absence, though, really opens up the top half of the draw for the young Pole, who enthused, almost wide-eyed, after her win: “When I was on the court, I just felt the ball perfectly. I felt like I could do anything with it.”

That’s how Barty must have felt for a lot of this clay-court season; now it’s the teenager’s turn.