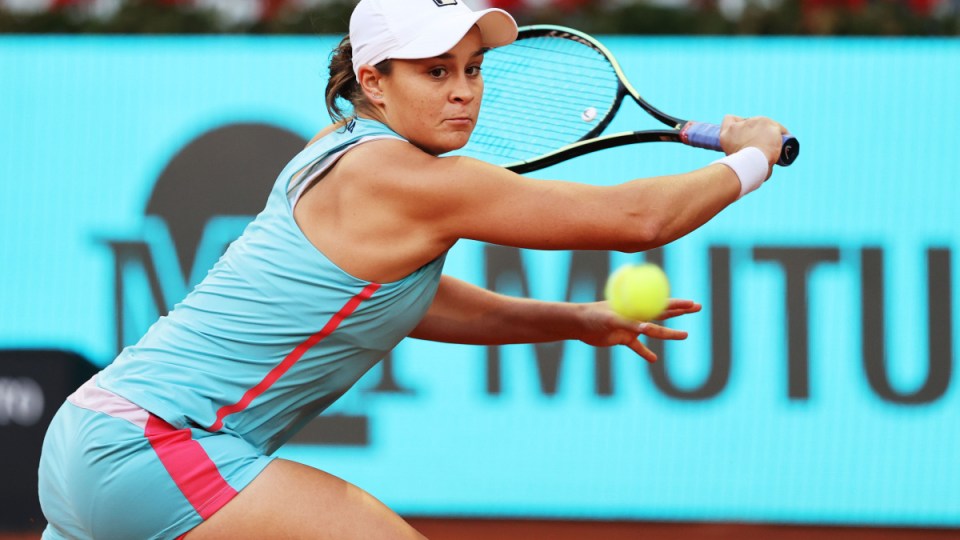 Ash Barty is through to the Madrid Open quarter-finals. Photo: Getty

Ash Barty has underlined her French Open title favouritism with an imperious clay court display to storm into the quarter-finals of the Madrid Open.

The world No.1 beat Polish teenager Iga Swiatek – winner of the 2020 French Open – 7-5 6-4 in a much-anticipated showdown between the past two Roland Garros champions.

Barty opted out of her 2020 title defence in Paris amid health concerns during the coronavirus pandemic. She has wasted little time proving she’ll be the player to beat at the season’s second grand slam starting later in May.

Barty rallied from 3-0 down in the opening set, and was never again broken after that, in also improving her 2021 record against top-20 players to 9-0.

“I really enjoyed myself out there tonight. I enjoyed the challenge. Iga’s game is exceptional. It’s really, really impressive,” Barty said after booking a quarter-final date with ninth seed Petra Kvitova.

“I love testing myself and trying to figure out the puzzle tonight and the challenges that she created for me.”

While putting Swiatek in her place, Barty was nevertheless hugely impressed by the young Pole’s game.

“I think the way she controls the court, has the ability to move and neutralise from defensive position is very, very impressive.”

Swiatek had won 18 consecutive sets on the surface dating back to her own French Open triumph last November.

She looked on track to continue that streak before Barty found her way into the contest.

“Probably the first half an hour was a bit of an adjustment period for both of us,” Barty said.

“It took me some time to get used to Iga’s weight of shot. Obviously, we had a game plan going into it, but I had to adjust that and had to kind of learn on the fly a little bit.

“It took me some time to get used to that and kind of nut down what I really wanted to do out there.

“Once I was able to do that, I became a lot more clear and was able to control the match a little bit more the way that I wanted to.”