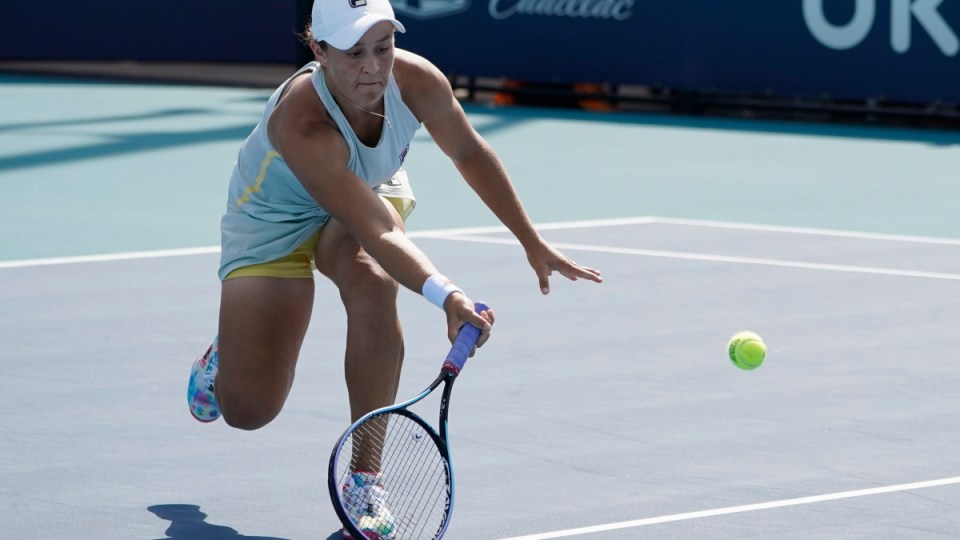 Ash Barty has taken a huge step in defending her Miami Open title and the world number one ranking, advancing to the semi-finals with a hard-fought win over Aryna Sabalenka.

The heat and humidity in South Florida reminds Barty of what conditions can be like in Australia. And she loves it.

The world’s top-ranked player didn’t wilt in the conditions against Sabalenka, winning the final nine points to prevail 6-4, 6-7 (5/7), 6-3 in a quarter-final showdown for her third three-set win in four matches this tournament.

With the temperature and humidity high, Barty and Sabalenka got a 10-minute heat break before starting the third set, though the defending Miami champion from when the event was last held two years ago looked like she didn’t need much downtime.

Barty faced seven break points in the match and saved them all.

A win over fifth-seeded Elina Svitolina or Anastasija Sevastova in the semi-finals will ensure Barty fends off the challenge of Naomi Osaka for the number one ranking.

Osaka can retake the top spot if she wins the WTA 1000 event in Miami and Barty fails to progress to the decider.

Since Osaka made history to become the first Japanese world number one after winning the 2019 Australian Open, only she or Barty have held the top spot.

Barty first overtook Osaka to become number one for the first time on June 24, 2019.

There was nothing to choose between Barty and seventh-seeded Sabalenka in the opening set until the Belarusian played a poor service game at 4-4 and threw her racquet away in disgust.

Barty looked poised for victory when she moved 5-4 ahead in the second-set tie-break, with a mini-break, only for Sabalenka to win three points in a row to square the match.

With it all to play for, Barty was unchallenged on her serve as Sabalenka began to feel an abdominal problem midway through the deciding set.

On her third break point chance of the set, Barty struck to take a 5-4 advantage and served out the match to love.