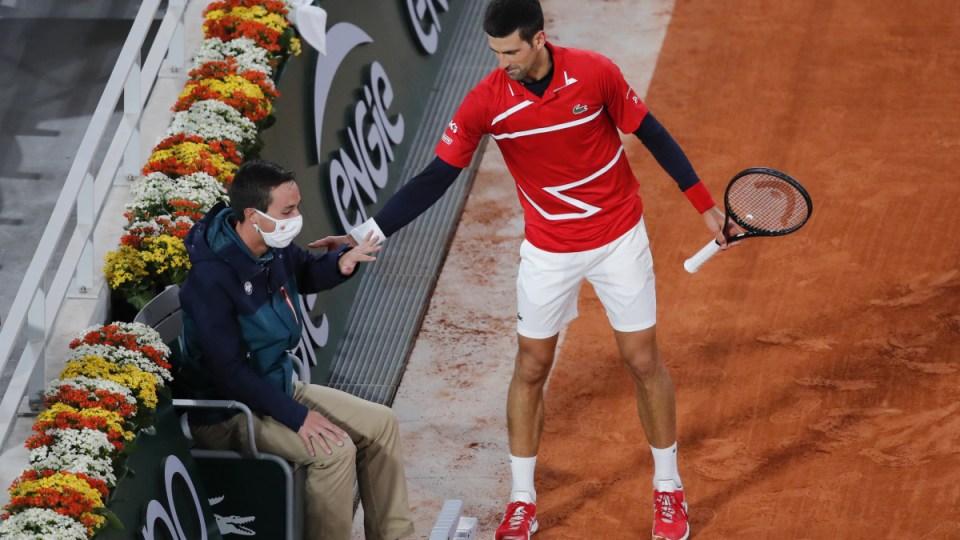 Novak Djokovic checks on the linesman who was hit by a stray ball from his racquet. Photo: AAP

World tennis No.1 Novak Djokovic has called for line judges to be replaced with technology after “a very awkward situation” when he hit a ball into a judge’s face for the second time in weeks.

The 33-year-old Serb was knocked out of the US Open in September when he hit a line judge in the throat after swatting away a spare ball.

This time – in a straight-set win over Karen Khachanov at the French Open – he faced no penalty because the ball was still in play and it was not a dangerous action.

“He dealt with it in a strong and brave way. But it was a hit because I was very close.”

Djokovic battled through to a record 11th consecutive French Open quarter-finals appearance with his 6-4 6-3 6-3 victory over the 15th-seeded Russian on Monday (local time).

It was Djokovic’s first grand slam event since the New York controversy, which left the female judge struggling to breathe. This time, however, the male line judge was unhurt.

“It was very awkward deja vu. I’m actually trying to find the lines person and see if he’s OK because I saw he had a little bit of a bruise, like redness, in that place in the head where the ball hit him,” Djokovic said.

“Obviously because of what happened in New York, people I guess are going to make the story out of this.”

But Djokovic said such incidents proved line judges should be replaced with Hawk-Eye technology.

“With all my respect for the tradition and the culture we have in this sport, when it comes to people present on the court during a match, including line [judges], I really don’t see a reason why every single tournament in this world, in this technological advanced era, would not have what we had during the Cincinnati/New York tournaments,” he said.

Most of the courts at the US Open, apart from the main show courts, had dispensed with line judges as a health precaution during the pandemic.

But they’re back at the French Open which, because it is on clay, does not use Hawk-Eye technology for close calls. It relies instead on umpire to examine a mark in the red dust.

The issue of whether players should be able to challenge via a Hawkeye review at the French Open and other claycourt events, as they do on other surfaces, has been debated in Paris all week. But Djokovic appears to want to go further.

“The technology is so advanced right now, there is absolutely no reason why you should keep line umpires on the court. That’s my opinion,” he said.

“Of course, I understand technology is expensive, so it’s an economic issue and a question mark. But I feel like we are all moving towards that, and sooner or later there is no reason to keep line umpires.

“Yes, ball kids, of course, ball person, yes, but line umpires, I don’t see why any more, to be honest,” he said before adding with a smile “I would also probably then have less chances to do what I did in New York.”

The ATP’s Next Gen tournament has experimented with Hawk-Eye technology calling the lines using an automated voice rather than having officials on court.

Djokovic is aiming for his second Roland Garros title since 2016.