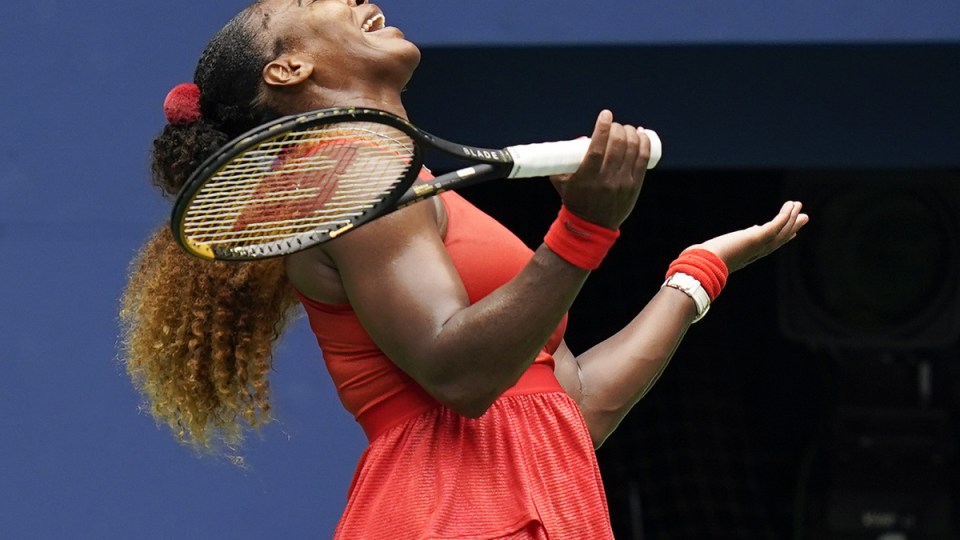 Serena Williams will face fellow former world No.1 and friend Victoria Azarenka for a spot in the US Open final after the two tennis mums won through to the last four in contrasting fashion.

Williams come out on top against another mother, rallying back from a set and a break down to defeat Tsvetana Pironkova 4-6 6-3 6-2.

A relaxed and confident Azarenka crushed 16th-seeded Elise Mertens 6-1 6-0 to return to the semi-finals at Flushing Meadows for the first time since 2013.

With no fans in Arthur Ashe Stadium, the Belarusian amused herself as she smiled and bobbed her head along to music being played during changeovers.

The two-times Australian Open champion fired 21 winners to dominate the Mertens in their first career meeting in a singles match.

The 31-year-old Azarenka didn’t let her foot off the gas in the second, running Mertens around the court and sealing the win when the Belgian dumped a backhand into the net on match point.

“Can it get any better? For me it can’t,” Azarenka said about her looming mach against Williams.

“I’m so excited about this.

“It’s an amazing opportunity to play against a champion, somebody who I respect a lot, who is my friend.”

It was a much tougher challenge for Williams against Pironkova, who on one point hit a return of serve left-handed and served 20 aces for the match – her most in a match in eight years.

“It’s not how you start, it’s how you finish, right?” Williams said.

The unseeded Pironkova, doesn’t even appear in the WTA rankings at all and played with a protected ranking – this was her first tournament of any sort in more than three years, because she left the tour to become a mother.

Williams, who turns 39 in less than three weeks, has won six US Open titles and is just two wins away from a record-tying 24th grand slam singles title.

Williams leads Azarenka 18-4 head to head and has won all 10 of their grand slam encounters, including the 2012 and 2012 US Open finals.

Naomi Osaka, the 2018 champion, will take on Jennifer Brady in the other US Open semi-final with both matches scheduled for Friday AEST at Arthur Ashe Stadium.

Serena Williams wins through to US Open semi-finals