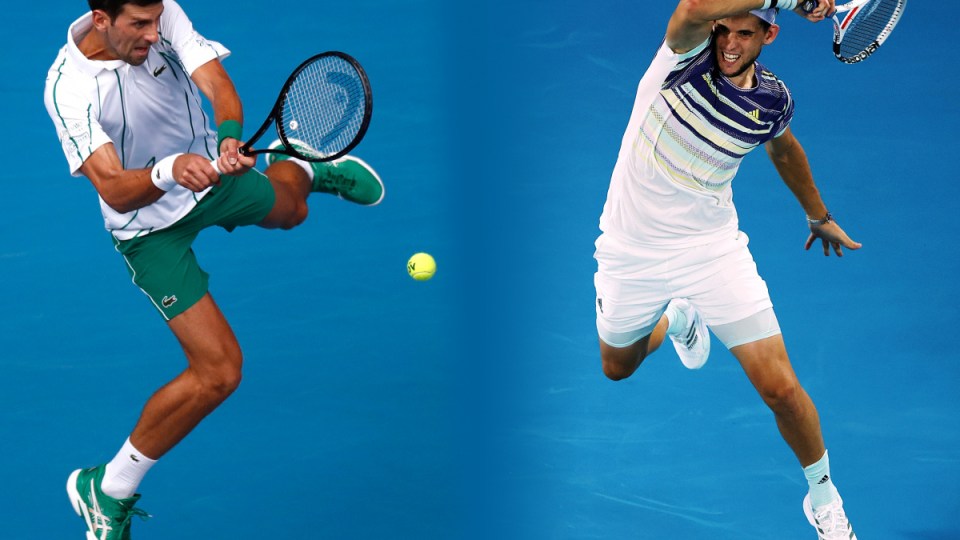 And the winner is? Novak Djokovic of Serbia (L) and Dominic Thiem of Austria. Photo: Getty
analysis

Yet another Australian Open final featuring Novak Djokovic contains a noteworthy new co-star. In the absence of a Roger or Rafa, even a Murray or a Cilic, meet Dominic Thiem. The much-improved hardcourt version, anyway.

Although the major winner’s circle has remained the exclusive domain of The Big Three since the 2017 US Open – when Stan Wawrinka barged his way back in – three of the past four grand slam deciders have included a younger challenger: Thiem at Roland Garros, Daniil Medvedev at Flushing Meadows, and now Thiem, again.

Now facing Novak here, he’s the king of Australia, so I’m always facing the kings of the grand slams in these finals.”

Even the republicans among us can not mount a counter-argument, given that His Royal Highness Novak is a perfect seven from seven in his previous Australian Open finals.

He is also in phenomenal form, on song, on serve, and bidding to become the first man in the Open era to win singles slams in three different decades. Another would be No.17. Nadal has 19. Federer 20.

“We are playing in tough times, we young players. We always have to beat all these unbelievable legends,’’ said Thiem, 26, when asked to compare the challenge of dethroning Djokovic with guillotining Nadal in his.

“But I try to take my experience what I made in the last two major finals and try to improve myself even more. I think I did that from ’18 to ’19 in Paris, and I tried to improve even more now.

“In this one I have the feeling that I have great experience now. I’m feeling that I can really keep up my level for all the two weeks, which was not the case maybe in my first Roland Garros final.

“So that’s what I’m taking … try to be in the zone straightaway on Sunday night.’’

Djokovic will be an overwhelming favourite, and only Wawrinka has completed the Nadal/Djokovic double at the same slam, but Thiem is not without hope.

While perhaps a minor revelation to Australian audiences who largely confine their tennis viewing to January and, perhaps, Wimbledon, this has been a work-in-progress for some time.

Toppling Federer to claim the Indian Wells title was a huge step, and after excelling, typically, on his favoured clay, the defeat of Djokovic en route to the final of the prestigious ATP year-ender was another hint of what was to come.

A debut hardcourt Masters 1000 in the California desert, provided “so much relief and confidence“, Thiem said, the high-bouncing conditions similar to clay. But there was more to come, as he non-clay tennis with more aggression, served smarter and returned better, was more prepared to more forward.

“I told myself if I can be in the finals in London, the ATP Finals, why not as well in a hard court slam?’’ Thiem said. “Since then I know that I’m also playing very well on the faster surfaces.’’

Zverev, who knows him well, has noticed, describing Thiem’s current level as “the best tennis of his life’’.

The shots are flatter, the monster forehand is the fastest in this tournament, and his single-handed backhand down the line a fine weapon, too.

“Before he was a complete clay court player – lot of movement, a lot of running around, stuff like that,’’ Zverev said after their semi-final.

“Now he has a complete hardcourt game, which he can play on clay. Of course, he still plays the old way. On hardcourt, he’s a much different and much better player.’’

As Djokovic pointed out, Thiem is now too old and established among the top echelon to be one of the #NextGen cohort.

“He’s already there. It’s just a matter of one match here and there that can potentially give him a grand slam title, that he can actually get in the mix of top three in the world.

“He definitely has the game. He has the experience now. He has the strength. He has all the means to really be there.

He has improved in the last 12 months playing on the hard court without a doubt, and the results are showing that.’’

Yet this is still a generational clash, considering that the likeable Thiem would be the first child of the 90s to win a major in the men’s. His would also be the first new name on a slam singles trophy since Cilic’s was engraved on the US Open in 2014. Since then, the Big Three have swept 12 slams in a row. Again.

Thiem has spent around six hours more on court than Djokovic, although the fact that he has less than 45 hours rest between matches, on top of the demands of a gruelling quarter-final duel with Nadal, may not be the disadvantage it seems.

The second semi has produced six of the past 10 champions. Pros. Cons. “I think it’s also a little bit of a challenge to have all the time one day off (between matches) and all of a sudden two,’’Thiem said.

“Of course, I have less time to regenerate. But with all the adrenalin and everything, it’s going to be fine.’’

Head-to-head statistics are also interesting: Djokovic leads 6-4, but Thiem has won four of the past five, which includes a slam.

“The younger players now coming up and challenging us oldies to get to the grand slam finals. It’s happening already … It’s inevitable it’s going to happen more frequently in the future,’’ said Djokovic, 32.

“I think it’s good for sport. I’m going to try my best to prolong the domination in the grand slam as much as possible. I’m sure Roger and Rafa would agree. But it’s going to happen.

Whether it’s this year we’re going to have a new Grand Slam champion or next year, but it’s very soon. Why not? I mean, it’s good for our sport. Of course we need more champions.’’

Lower down the pecking order, wildcards Luke Saville and Max Purcell are the feelgood local story of the doubles draw, and the first all-Australian finalists since a considerably high-profile duo in 1998.

Perhaps those very same Woodies could present the trophies? We see a lot of Todd. Not so much of Mark. Now, there’s an idea.

The self-titled Slugs have been inching in this direction during a productive stretch on the Challenger tour, and the importance of this achievement includes prizemoney to split of either $261,352 (L) or $522,705 (W), which can make an awful amount of difference to players at the sport’s non-pointy end.

Saville, 26, was a junior world No.1 and grand slam winner who has found it a horribly steep transition to the senior ranks. Yet a nicer guy in tennis would be hard to find, so may this breakthrough be the start of some belated progress in the singles ranks.

Lastly, to Ash Barty and the baby-in-the-interview room palaver.

Without necessarily agreeing with the decision to front the media cradling her infant niece Olivia, those criticising the world No.1 of using the child as a “deflection” or “human shield” from tough questions in the aftermath of her painful semi-final loss to Sofia Kenin should revisit the video of her Fed Cup tie in Brisbane last Easter.

Barty walked out for her important reverse singles match against Aryna Sabalenka carrying her elder niece, Lucy, who then sat beside Auntie Ash during the press conference afterwards. Sat beside her after a win being the relevant point here.

Whether media rooms are the place for children is certainly open to debate, and an argument that many journalists believe needs to extend to player agents, as well.

But it’s a big call to suggest Barty needed a baby to hide behind after exiting a tournament that was still, by most measures, a success.

HEAD TO HEAD – THE FORM LINE

Australian Open: Djokovic favoured, but soon enough it will be Thiem time