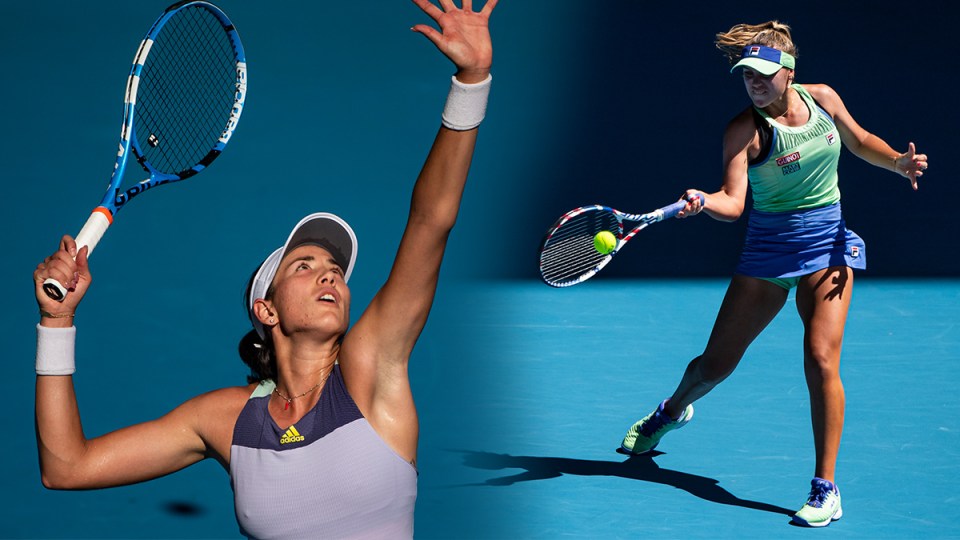 For breakout star Sofia Kenin, the Australian Open fortnight has been an arrival. For former world No.1 Garbine Muguruza, a return.

Barty-pooper Kenin’s major finals debut will be Muguruza’s first since 2017, and the latter’s French Open and Wimbledon singles trophies are evidence that she knows what it takes to succeed on the biggest stage.

Yet if a recent question about whether she felt like she had woken from a coma and suddenly remembered how to play tennis again was acknowledged as overly dramatic, then the fact that the 26-year-old is unseeded at a slam for the first time since 2014 is proof enough of her struggles.

“I think the toughest moment is when you work hard, work like before, or even harder, and you don’t feel like results are coming fast,’’ Muguruza said.

“So I think that’s the tricky part of us. Athletes sometimes can get a little bit desperate, get too impatient about it.

It’s very tough to be for so many years in the top of the game, being that consistent. I feel like it’s something super hard to do.’’

Muguruza managed it, and a top-21ranking, for five consecutive seasons, until her unhappy decline.

The end-of-2019 replacement of coach Sam Sumyk with fellow Spaniard and Wimbledon champion Conchita Martinez – who was a temporary member of Team Garbine in Sumyk’s absence during that triumphant 2017 visit to the All England Club – has been hailed as both a positive and overdue move that has again produced immediate results.

So, why? Martinez has joked that she does not wish to jinx anything with an explanation.

“I’m sure it’s going to be tough times. It’s been good times. It’s great to enjoy the moment. It’s going well. Let’s just enjoy what we have right now.’’

Muguruza says the pair share a simple “complicity” and the understanding between a past player and a current one. 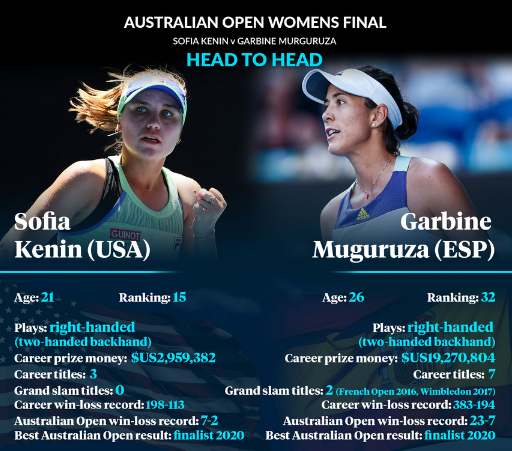 There are no guarantees that what has worked before will succeed again, she stressed, but Muguruza is enjoying strong success at the net, and says she has no fear of moving forward.

A stoic determination and steely focus was apparent in the extreme heat of Thursday’s semi-final upset of Simona Halep, as it was with the understated fist-pump afterwards, for the message is that the job is not yet done.

Only two unseeded women have won the title before, and how shakily Muguruza’s eighth visit to Melbourne Park started – with the loss of all but nine points in a first set whitewash against Shelby Rogers. She has not dropped a set since, though, including against world No.5 Elina Svitolina and No.10 Kiki Bertens.

Two types of experience may be influential in different ways on Saturday night, with Muguruza describing as a “life-changing” her off-season African trek up Mt Kilimanjaro.

“Definitely had an impact on me, not as a tennis player, but just in general. Being through such a tough challenge, I think, yeah, did many things inside of me.’’

As for her trio of grand slam finals appearances completed by a loss at Wimbledon in 2015, that is three more than Kenin can boast.

Yet what the Russian-born American does have are exceptional competitive and fighting qualities, and while the 170-centimetre warrior may not have the most aesthetically pleasing game style, top seed Ash Barty saw up close just how difficult the imminent top-tenner is to put away.

It will be crucial how she manages the early nerves in the most important match of her life, which Kenin says she has been dreaming about since the age of five.

At six, she was what the Americans like to call a “phe-nom”, and there is a gorgeous video which shows young “Sonya” (her nickname) being given a tour of the Miami Open by Kim Clijsters.

With mother-of-three Clijsters about to embark on her comeback, Kenin’s most vivid Australian Open victory is of the Belgian beating Li Na in the 2011 final.

Now, suddenly, but also not, here she is, having already exceeded most expectations except her own. Coached by her father, Alexander, she leads Muguruza 1-0 in career meetings and is preparing for her own big moment, which she has vowed to enjoy.

“I got here, it’s time to shine, do the best I can. Hopefully do something more special,’’ said the player who was a junior US champion in every age group, and won the first of her three WTA titles in 2019 in Hobart.

Kenin last year won the WTA’s Most Improved award after leaping from No.52 to 14th, recording the most hardcourt match wins on tour and toppling Serena Williams in the third round at Roland Garros to record what, at the time, was her best major result.

“I mean, I always believed I can,” she said of reaching a maiden final so soon afterwards, just two months after turning 21.

“Of course, I didn’t have a book. I didn’t know exactly when. I feel like at this young age, it’s incredible.

“Not everyone gets to live this moment, live this dream. I’m just really grateful for it.”