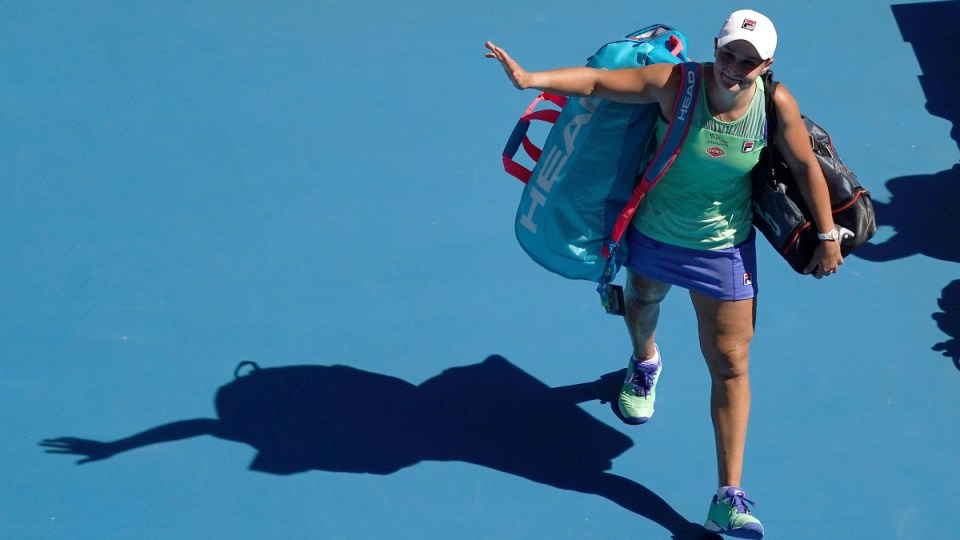 Farewell to all that: Ash Barty leaves the court after losing her semi-final on Thursday. Photo: AAP
analysis

As the Australian Open continues without Ash Barty, so the crushing disappointment of Thursday’s 7-6 (5) 7-5 semi-final loss to Sofia Kenin will linger for a little while yet.

Barty declined to call it an opportunity squandered, but have no doubt that this will really sting.

The progress Barty has made since reaching the last eight for the first time here 12 months ago to become the French Open champion and woulda/shoulda/coulda-been drought-breaker here has been remarkable, but, inevitably, it also heightens the sense of national letdown.

How enthusiastically Australia has embraced again being the land of a world No.1.

Barty will remain there when the new WTA rankings list is released on Monday, but look no further than the history books for evidence of how infrequently these chances may come.

And if Roland Garros was a place where nothing was expected, at Melbourne Park – where more than three decades of Australian Opens have produced just four home-grown singles semi-finalists – everything was on the line.

How much of a factor was the occasion? The attention and expectation? Only Barty really knows. She is a homebody and, as much as there is no place like it, nor can it have been easy to block out the clamour to crown the first local winner in 42 years.

Make that 43 now, as the 14th-seeded Kenin prepares for her maiden grand slam final against a reborn Garbine Muguruza, a dual major winner unexpectedly through to decider No.4.

By then, Barty will be back in Ipswich with her family, friends and dogs, even as human instinct is likely to be drawing her mind back to what went wrong.

The tenacious American did enough right, of course, but it is not often that Barty hits 36 errors in the hour and 45 minutes that this match lasted in brutal furnace-like conditions.

Or fails to convert any of her four set points.

Or, well, just seems so incapable of finding her marvellous A-game, and not just in the semi, but the lead-up.

The heat was extreme, although this was Queensland versus Florida, sunshine states both, and neither help nor hindrance, Barty insisted.

The balls were flying. and the top seed’s execution – especially on her usually-potent forehand side – was too often awry.

Fed Cup captain Alicia Molik suggested a sleepless night may lie ahead for her “devastated” charge, having lost a match she expected to win, and the shock was palpable on a walk around Melbourne Park shortly afterwards – a quick walk, it must be said, as it was almost unbearably oppressive.

Had that just really happened?

This was not the script begging to be written, and Kenin not a name terribly familiar for the once-a-year local tennis-goer.

Still, with that sort of fighting attitude, it is increasingly one to be feared.

A decent backstory, too, for the Kenin family emigrated to the US from Russia with about $500 and a dream, so the story goes.

An outstanding junior, but never the highest profile or most celebrated of the young Americans, 21-year-old Sophia’s finals payday is a minimum of $2.065 million, her family’s quest for a more prosperous life vindicated long ago.

A beaming Kenin referenced the famous video of her seven-year-old self explaining how she would return an Andy Roddick serve, and the long-retired former US Open champion responded on Twitter that “this girl has become the goods”.

Barty had already departed Rod Laver Arena, quickly, and when she re-appeared in the interview room, it was carrying her baby niece Olivia.

Doting Auntie Ash might have needed a group hug; what she didn’t need was a replay.

“No, mate. I haven’t watched a match that I’ve played for a long time,’’ she said.

“We kind of learn from it. I’ve lived through it, I played it, I know what happened. We chat about it, we learn, then we move on.’’

To Doha and Dubai next, and without any Fed Cup detours home in the meantime, given the competition’s new format, her next match in Australia won’t be until next January.

Barty rated this one an outstanding success, given her first home-soil title in Adelaide, and just her second major semi-final, which was her first at Melbourne Park.

A “different” experience and assignment than in Paris, but still an experience to savour, nonetheless.

“Oh, I’ve learnt so much over the last month. I’ve learnt from all of the experiences that I’ve kind of been thrown into. I’ve loved every minute,’’ Barty said.

“The next time I walk out on court, the next time I kind of wake up in the morning, every experience you need to learn from. I’ve done that.

“I feel like as a team we’ve grown. We’ve enjoyed every single minute.

“I mean, can’t wait to get started for kind of the rest of the year. I feel like it’s going to happen pretty quickly and we’re going to be back sitting at this table with an Australian summer next year.’’

If that seems an awfully long way off at the moment, then consider what the 23-year-old has achieved since this time last year.

There would be a debrief and a cold beer or two, leaving thoughts of what-might-have-been as perhaps the other order of the day.

Linda Pearce: What went wrong for Ash Barty at the Australian Open