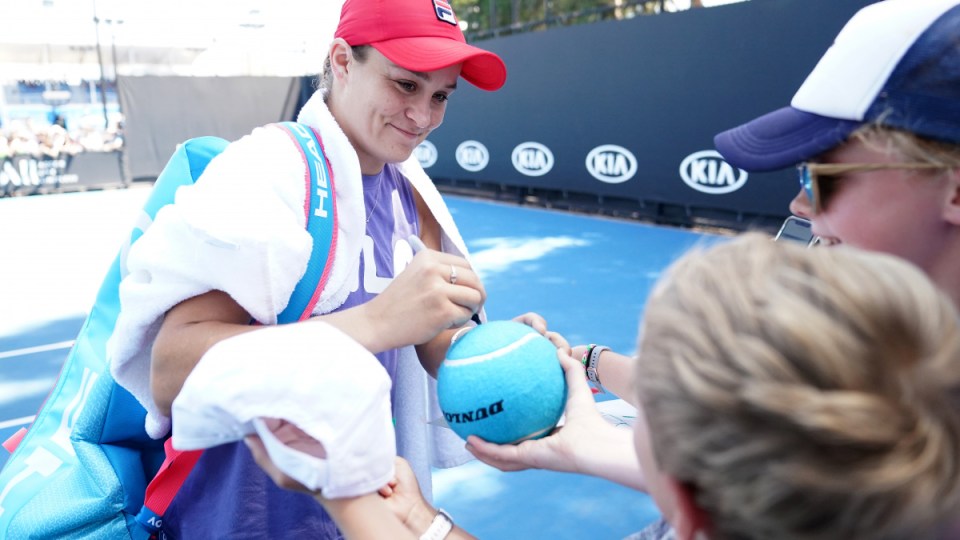 Wendy Turnbull is thankful to Ash Barty and glad she’s still alive to see the day a countrywoman, another Queenslander, is in an Australian Open semi-final.

Barty’s achievement marks the first time an Australian woman has made the last four in singles since Turnbull was beaten by Chris Evert at Kooyong 36 years ago.

It was by chance that Turnbull arrived on the eve of Barty’s clash with 14th seed Sofia Kenin, having pre-booked her first trip to Melbourne Park in about five years.

“So timing’s everything. I’m looking at this as maybe it’s a good omen,’’ says the three-time grand slam finalist who splits her time between the Sunshine Coast and Florida, but whose allegiance is not in doubt.

As to why it has been almost two generations between home-grown women in the last four: “Well, that’s a good question. I mean I knew I was the last person, but time flies, and you don’t realise it’s been that long. When they say the number of years you go ‘oh, my God!’.

“So I’m glad Ash is in the semis. I want her to make the final and I want her to win. It’s time. It really is. And what better ambassador for Australia, for young Australians and for women athletes in Australia. Ash, she’s so good.’’

Turnbull considers it a positive that Barty has kept winning despite some patchy tennis in in the opening five rounds, and sets dropped to Lesia Tsurenko and Alison Riske.

The world No.1 was perhaps fortunate that Petra Kvitova could convert only one of nine break points in the first set of the pair’s quarter-final that several experts had predicted would be Barty’s toughest match of the tournament.

News flash: The evidence from Simona Halep’s thrashing of Anett Kontaveit on Wednesday seems to suggest the reigning Wimbledon champion would be a more difficult foe.

Regardless, a new Australian Open women’s champion is certain to be crowned.

Yet both the title favourites have a match to win before the big one being predicted: Halep against a resurgent Garbine Muguruza, and Barty facing the feisty Kenin, 21, a scrapper set to be the newest entrant into the WTA’s top 10.

“Kenin is a hell of a fighter, so you can never count someone out who’s got a heart like Kenin on the court,’’ says Turnbull of the Russian-born American, who came through a tough quarter-final against Ons Jabeur.

“She’s quick. She never gives up.

“Ash I think has got a better tennis game that Kenin, but when you get down to this stage you’ve got to look at somebody’s heart, their guts and what they’re willing to do to win.

Kenin’s got an attitude. She could be really really tough for Ash, because she is going to try and get in her face, I think.’’

In the words of former Australian doubles great, now ESPN commentator, Rennae Stubbs: “Sofia Kenin is not afraid of anyone, and that’s what I love about her.’’

Barty leads the head-to-head 4-1, the most significant of those wins coming in the round of 16 last year at Roland Garros, where Kenin had just eliminated Serena Williams, but could not halt the Australian’s run to her first major title.

The top ranking came soon after, and although the noise around Barty is amplified at her home slam, she appears to be taking a similar approach as 2005 runner-up Lleyton Hewitt, who recalls embracing the spotlight and riding the wave, while sealing himself in something of a bubble at the same time.

She is a happily-feet-on-the-ground member of a close-knit team of piss-takers, though, with a level of public popularity that is Pat Rafter-esque.

The former semi-finalist said after Barty reached the same round 19 years later that, while standing only 166 centimetres, it’s the heavy forehand that makes her seem imposing for her size.

Also an admirer of Barty’s variety, athleticism, movement and defensive skills, Rafter believes the slow conditions are responsible for the relatively small number of net points from the player acknowledged to have the best hands in the women’s game.

Perhaps conditions will be slightly quicker on Thursday, when the hottest weather of the tournament is forecast.

Sun/heat/day is Barty’s ideal scheduling combination, and she will lead off against Kenin at 2pm.

The 23-year-old has noted her younger opponent’s development in the past 12 to 18 months, and knows she will be confronted by an intense, strong competitor who ”loves to put herself out there, test herself on the biggest stage”.

“She has a great knack of controlling the court from the centre of the court and being that first-strike player. It’s going to be important for me to try and nullify that if I can,” Barty said of Kenin.

Turnbull will be courtside, her status as one trivia question answer erased now that another Australian woman has reached the penultimate round.

She has recently been superseded in the “most recent finalist” category at two overseas majors – when Sam Stosur was runner-up at the 2010 French Open and the US Open champion in 2011.

Which leaves just one little piece of history waiting to be overtaken, for the 67-year-old reached the championship match at the 1980 Australian Open against Hana Mandlikova.

Barty is now just one match away.

“I never imagined it would take this long, but thank God for Ash,’’ says Turnbull.

“I don’t need to be dead and still ‘the last woman’. No. Ash needs to put her name in the record books.’’