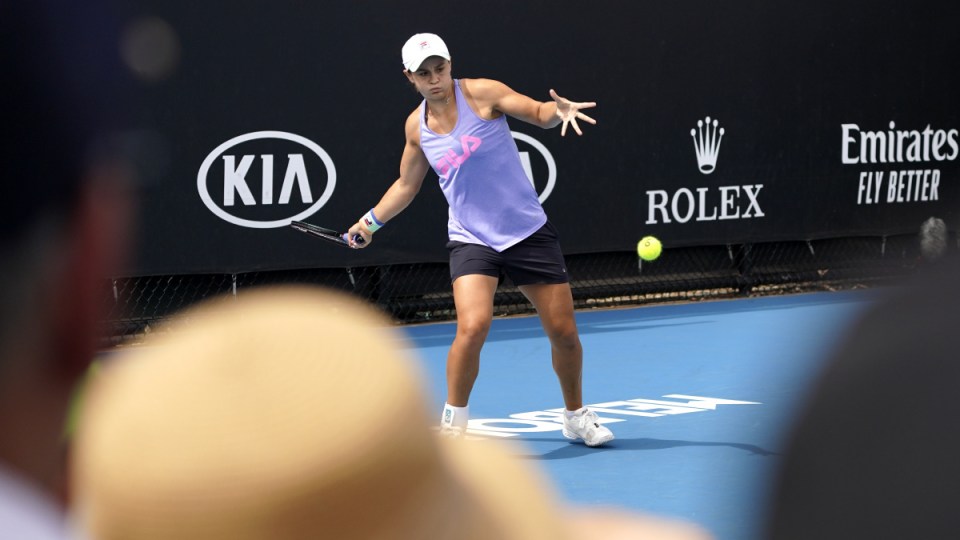 Ash Barty has been the centre of attention at Melbourne Park this week. Photo: AAP
analysis

Pat Rafter. Pat Cash. Mark Philippoussis. Jelena Dokic. Four Australians among those who know what life is like as a singles hope in the second week at Melbourne Park.

They have, in varying degrees, walked in Ash Barty’s shoes, so have experienced what comes with being the intense focus of a host nation’s eyeballs.

Cash was an Australian Open finalist, twice, on either side of the 1988 move from Kooyong to Melbourne Park.

Philippoussis and Dokic – who both claim to have picked top-seeded Barty as their singles champion ahead of the event and are sticking with that prediction – reached at least the fourth round in their own time and way.

Rafter was a semi-finalist, in his farewell appearance back in 2001, has known Barty since her junior days in Brisbane and last weekend presented his fellow Queenslander with her Young Australian Of the Year Award.

All like what they see, and are optimistic about what lies ahead.

“She’s a pretty special girl,’’ Rafter said, recalling the talent of the “little” girl he knew.

“My analysis of her game was ‘you’ve got every shot, I can’t fault you anywhere, just as you get older hopefully you grow,’ and she’s grown into an amazing player. She really is phenomenal.

“I think the draw is pretty open,” he told Nine.

“The women’s (title) is for anyone … I mean, we didn’t see the French Open coming – well I certainly didn’t, and she played terrific, so why can’t it be here?’’

The first of three remaining hurdles is Petra Kvitova in Tuesday’ afternoon’s quarter-final, the dual Wimbledon champion having eliminated Barty 6-1 6-4 at the same stage in 2019.

There is no doubt the Australian is a vastly better and more seasoned player 12 months on, but the world No.1 status is also new territory at her home slam.

“Having the expectation is a bit of a double-edged sword,’’ said Cash, the 1987 Wimbledon champion who famously anchored two home Davis Cup triumphs.

“I think Ash expects to do well, as well, so that adds a little bit of pressure, and I don’t think she’s played ‘loosely’ this year.

“But now she’s got through to this stage, she can relax a little bit.

“I think if she’d lost beforehand people would go ‘oh, you know, that was a disappointment’ and she would think the same thing.

“She’s obviously eyeing off trying to win the title, but there’s no shame losing to a Kvitova or whoever else is (still in) in the tournament.

“So this is the time where she can start relaxing, and I think her best tennis is ahead of her.’’

Yet former doubles great-turned-TV analyst Rennae Stubbs is among those who point out that the seventh seed’s powerful leftie game has the capacity to attack her opponent’s backhand side – however improved.

Barty’s slice is enviable, but the forehand still a more imposing shot, and less vulnerable to what the flat-hitting Kvitova may bring.

Asked how she saw the match-up between Barty, who has won the pair’s past three meetings, and Kvitova, who swept the first four, Stubbs is confident about the outcome if the Queenslander can control her emotions, considering the significance of playing at home.

Petra’s game, certainly if she’s on, it can be troubling for Ash, cause she can use the leftie serve to get the ball to Ash’s backhand.

“But I think Ash has the ability to get the power ball back and maybe make her play one more ball. I think Ash knows how to win now.’’

Philippoussis tips a Barty victory, just, and is one of many admirers of the way the 23-year-old mixes up the play.

Slice? Big tick. So, too, the forehand.

“She’s in a great place physically and mentally, and she’s obviously got that great belief and that presence on the court and she’s building confidence with every match,’’ he said.

As far being the tennis focus of a nation, the former top-10 player and Davis Cup hero describes it as a (mixed) blessing and an honour.

“To have that energy behind you and people cheering for you, yeah, there’s a little bit of pressure, but pressure is a beautiful thing. It means people believe in you,’’ Philippoussis said.

“Let me tell you, when there’s times when you’re out in the fifth set or you’re exhausted, that energy of the crowd gets you through those matches, and she’s definitely using that energy in a positive way.’’

Dokic noted the significance of the first Australian reaching consecutive quarter-finals since the move to Melbourne Park – the fact this is where it all started for Barty last year, as a prelude to that breakthrough triumph at Roland Garros in June.

Still the home-court factor brings its own challenges.

“Not a lot of people have done it over the years. It’s tough to play at home.

“I was someone that really loved to play in Australia.

“I did well here, but at the same time you still feel that extra pressure, media attention, expectation, and it’s a lot tougher to do it at home, no matter how well you handle pressure.

So I’m sure she’s feeling it a bit more here than she is anywhere else, but so far so good … I think winning Adelaide was huge for her. It’s her first title at home, and would have given her a lot of confidence.’’

Perhaps, though, the last words should go to a couple of non-Aussies, former doubles partners Martina Navratilova and Pam Shriver, as a couple of neutral observers looking from the outside in.

Navratilova: “I give the slight edge to Ash Barty if she plays her best tennis. She’s got the most variety and this court really suits her. I think it’s fast enough but slow enough for her to do her magic.

“It’s going to be a great tactical match for both players and Ash needs to hope Petra’s not on.’’

Shriver’s concern is that Barty is yet to find her A-game in the first four rounds. And needs it now.

“The problem with the leftie match-up with Kvitova is that she can really, really pound away on the backhand side,” said the American.

“But I kind of feel like that’s one of the areas where Ash has shored this up, as she’s able to handle the pace more on that backhand and knows that she can change her position. And her movement’s good. She can go with the two hands, the slice.

“It’s a match-up that as much as I’d like to say it favours Ash, it doesn’t. It favours Petra a little bit more.

Australian Open: Past local heroes know what Ash Barty is up against