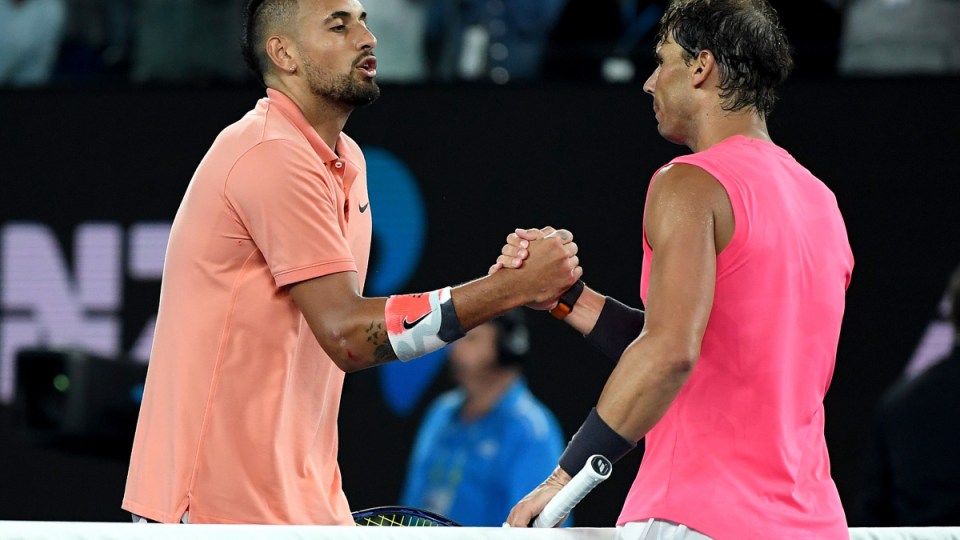 A classic: Nick Kyrgios and Rafael Nadal meet at the net after their four-set match on centre court. Photo: AAP

Rafael Nadal says he wants to see more of the fighting spirit and positivity Nick Kyrgios displayed in their gripping centre court match that the world No.1 won in four sets.

Nadal kept his cool in a fourth set tiebreaker on Monday night to edge Kyrgios and set up an Australian Open quarter-final clash with Austrian fifth seed Dominic Thiem.

Kyrgios battled hard against Nadal. But after losing the third-set tiebreak and smashing a racquet, the Australian had an inconsistent fourth set, going down 6-3 3-6 7-6 7-6 – the same scoreline as their second-round Wimbledon showdown in 2019.

In a more mature and thoughtful post-match performance than he’s displayed in the past, Kyrgios said he was shattered to have fallen short again at his home major.

“But, overall, this summer has been fun. I feel like I’ve made progress as a human,” he said.

The 24-year-old became emotional as he revealed he had been drawing inspiration and strength by thinking of his idol Kobe Bryant.

NBA basketball superstar Bryant died in a helicopter crash on Sunday (US time) along with his 13-year-old daughter and seven others.

“It’s horrible news. If anything, it motivated me. If you look at the things he stood for, what he wanted to be remembered by, I felt like, if anything, it helped me tonight,” Kyrgios said.

“When I was down a break in the fourth, I was definitely thinking about it. I fought back.”

Kyrgios has been playing for higher forces all summer, leading a movement for athletes to donate to bushfire victims for every ace they hit on court.

On Monday night he entered Rod Laver Arena wearing a LA Lakers No.8 singlet, seeming to tear up as his thoughts turned to the helicopter tragedy.

“I mean, I’m a Celtics fan. When I saw Kobe do what he does, break the hearts of so many Celtics fans, it was tough to see,” Kyrgios said.

“I don’t think they make them like him anymore. He was different, the way he trained, the way he did things, the way he played. He was special.”

His loss leaves Ashleigh Barty the sole Australian in the competition.

Kyrgios, ranked 26th in the world, suffered from unforced errors at crucial times, not the least a double fault during the third-set tiebreak, although Nadal himself offered one up himself soon after.

With his serve broken early in the fourth set, the local favourite looked to be out of the match, but he stunningly broke back late in the set to force the issue to a tiebreak.

The Spaniard held his nerve as Kyrgios struggled to impose himself in the final points, Nadal winning 7-4.

Having endured a sometimes testy relationship, Nadal praised the Australian’s skill and spirit this summer.

“It was a very tough match,” Nadal said in his post-match interview.

“Against Nick you are never under control.

“If you have a mistake, like I had in the second set with one serve of mine that I had a mistake, then he has a break it is so difficult to break him again …

There had been little sign of bad blood between the pair during the match, with Nadal even giving Kyrgios the thumbs up at one point when the home hope lay prone on Rod Laver Arena after an exhausting 24-shot rally.

A quarter-finalist in 2015, Kyrgios must console himself with a projected return to the world’s top 20 for the first time since August 2018 after bowing out in the fourth round for the second time in the past three years.

With the match running to three hours 38 minutes, Kyrgios showed that he can guts out a match after a tiring schedule, although his 43 unforced errors ultimately told the story.

The Swiss veteran posted his 29th career five-set victory, while Medvedev’s poor form over the full distance stretched to six without a win.

“I feel since the off-season my level is really high. Physically I’m moving better than last year,” Wawrinka said.

“The week before here, I was really feeling at the top level.

“When I enter the court, I enter to win, and I know I have what it takes to do it.”

Medvedev said he found it tough to handle Wawrinka’s serve but was satisfied with his game.

“After a loss I’m not disappointed too much,” he said.

“Of course, I could do some shots better but he played a great match.”

Medvedev admitted he wasn’t a fan of five-set tennis although he thought it came down more to his inexperience than mental or physical conditioning.

I don’t like to play five sets. I get tired. I didn’t win one in my life but I’ll try better next time.’’

Austrian fifth seed Thiem also swept into the quarter-finals for the first time after a straight-sets demolition job on Frenchman Gael Monfils at Rod Laver Arena.

Thiem had never before passed the fourth round at Melbourne Park but rolled past world No.10 Monfils 6-2 6-4 6-4.

The victory stretched Thiem’s all-time dominance over Monfils to 6-0 but the Austrian said it was tougher than it looked.

Thiem rated it in his post-match interview as his best performance of the tournament.

“The score looks way easier than the match was,” Thiem said.

“I think I was lucky to make an early break in each set and then was managing to hold my serve well well and I’m so happy because I am for the first time in the quarter-finals here.”

However, Thiem said there was no bad blood with the 1995 French Open champion but the relationship just didn’t work out.

“Nothing bad happened there – we already said before we started the relationship that if it doesn’t work out, we’re going stop it, and that was the case.”

The world No.3 joined Australian top seed Ash Barty as the only other top-four-ranked player in the quarter-finals. 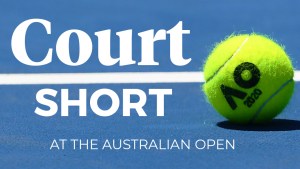 The issue came to a head 16 months ago at the US Open final when Serena Williams was penalised for receiving hand signals from her coach Patrick Mouratoglou during her loss to Naomi Osaka.

Acknowledging the rules were difficult to enforce, the WTA will now allow words of encouragement and hand signals from coaches in the players box. The trial will begin next month and apply to all Premier and International tournaments in 2020.

“I’m for it,” Cahill said of the WTA’s about-face on the issue of on-court coaching. “I’m big on tradition. I’m old.

“So I love the whole tradition of tennis and the one-on-one and problem-solving and what you’re trying to do. But I think we’re evolving as a sport.”

Nick Kyrgios can often been seen at training wearing a Boston Celtics match shirt, but on Monday night he wore an LA Lakers shirt in honour of Kobe Bryant – a moment seen around the world.

‘‘I have very close friend that he was playing with for a long time. And he always told me that he is the spirit of … hard worker. He always wanted more. He always wanted to increase his level. He had been an inspiration for the world of sport.’’

– Rafael Nadal on the death of US basketball legend Kobe Bryant

Coming up, quarter-finals on Tuesday …