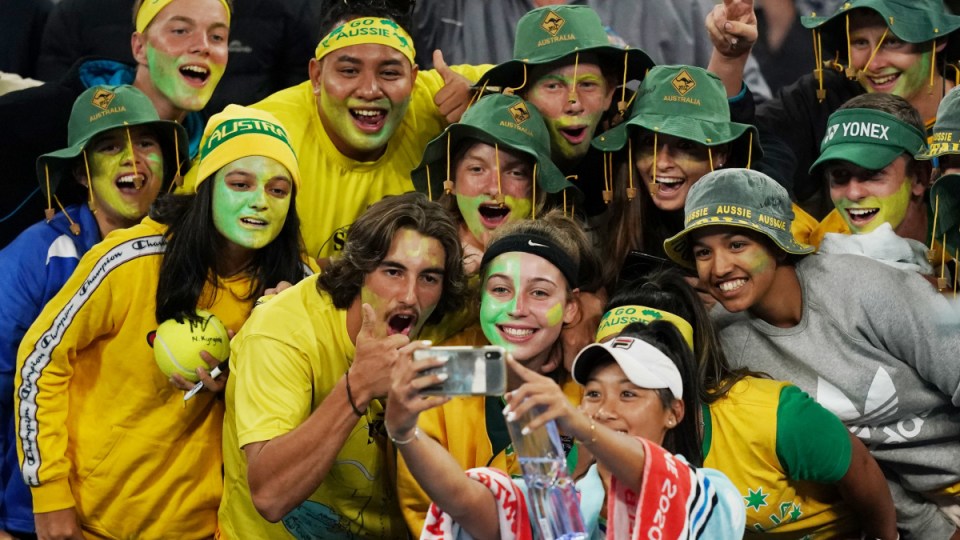 Priscilla Hon takes a selfie with fans after her late-night win on Tuesday. Photo: AAP
analysis

Ash Barty brings more than just a perfectionist’s attitude and inspiring up-close presence when she trains at her Brisbane branch of Tennis Australia’s National Academy.

The world No.1 is known to supply home-made baked goods, too.

“She makes cookies and brings them in and they’re so good. That’s a hidden talent that you can ask her about,’’ laughs fellow Queenslander Kim Birrell, the injured world No.309 who reached the Australian Open’s third round in 2019.

And the premier Barty Biscuit?

“She always makes different ones. I’m like ‘I don’t know if I should be eating these after gym, but I have to because Ash made them’.’’

Yet any potential downside in terms of upwards skinfolds is clearly outweighed by the benefits of having the French Open champion influencing by example during her occasional training blocks at Tennyson.

Certainly, there is a healthy Queensland flavour among the emerging crop of Australian women, including former top-160 resident Birrell, 121st-ranked Lizzie Cabrera and Priscilla Hon, who on Thursday will play triple grand slam champion and former world No.1 Angelique Kerber in the Open’s second round.

All three, among a cohort that includes Maddi Inglis and Jaimee Fourlis, are between 20 months and two years younger than Barty, 23, whom Hon recalls meeting her for the first time at the age of 10 at junior tournaments shared with the prodigious talent from Ipswich.

Barty won most of them, of course she did. Plus, more famously, the Wimbledon girls’ title a few months after she turned 15.

“Being able to train with the world No.1, I mean, you can’t get much better than that. Seeing her doing so well, it’s super-inspiring for all of us,’’ says Hon, whose first-round defeat of Kateryna Kozlova was her maiden singles win at her home slam.

“She’s quite relaxed off court, but when she’s on court she just gets down to business. Honestly, she’s so humble. Everyone loves her personality.

Barty’s predictable passage to the third round came on Wednesday against Slovenian Polona Hercog.

Expect a full house at Margaret Court Arena for Hon versus Kerber.

“I think it’s a good time to draw her,’’ the wildcard said of the German 17th seed who retired in Adelaide with a back injury, has had a revolving door of coaches, and appears to be in something of a decline.

“Obviously she’s still playing really well, but I quite enjoy playing lefties, so hopefully that will help.’’

Five other Australians are on the Thursday schedule, with adopted Queenslander Ajla Tomljanovic against Garbine Muguruza, and 30-year-old wildcard Arina Rodionova facing ninth seed Kiki Bertens as she also attempts to join Barty in the women’s last 32.

All of which adds up to a decent local presence, and if the men’s numbers run deeper, generally, then Fed Cup captain and former world No.8 Alicia Molik is both pleased and optimistic about what lies ahead for a group that has only one world-beater, but growing strength in numbers, and Daria Gavrilova still to return.

Yet there is daylight from the top cat to Tomljanovic (No.52) and a similar gap to the rest.

As Barty looks down from every billboard and jokes of needing to keep the dollars coming in as she builds her “forever” house”, Hon et al are more about tomorrow; a land where glorious round-two prizemoney of $128,000 (less a few deductions), or, potentially, $180,000 if she can get past Kerber, can make a massive difference.

Asked pre-tournament about Hon and Cabrera, Barty said both could flourish without her help.

Those girls are on their own journey, on an incredible journey. I have a lot of time for those girls. They’re both incredible people and great athletes. I think, for them, this is just the very start.’’

Sam Stosur is also a close ally of Australia’s #NextGen, noting that a group emerging collectively is also one of mates.

“They all genuinely get along so well, and it’s so nice to see, because they can be competitive. But they really are a great group of friends, and that’s very rare,” Stosur says.

“I think that shows what we are about in Australia, because – and it might be a bit of a cliche – it’s about more than just playing. It’s a great group, so you hope that they can then go on with it, too, because they’re all trying to push each other, but then do it in a way where it’s also supportive.’’

Birrell, who grew up on the Gold Coast idolising the 2011 US Open champion, now has a pinch-me moment whenever Stosur’s major-winning successor is sharing her practice court.

“Every time I see Ash I just forget that she’s No.1 in the world because she’s so down to earth and so normal and will always have a chat,” says Birrell.

“She’s just so nice, and I don’t think that will ever change with Ash. We both train in Brissie and she hits with the girls and just to have that in our training environment it’s insane. Insane.’’

Yet if the bubbly 21-year-old has been known to sample Barty’s range of baked goods, then Hon must reserve judgment.

“It’s happened a few times and I haven’t been there,’’ she says of the cookie catering service. “So I can’t tell you if it’s any good.’’