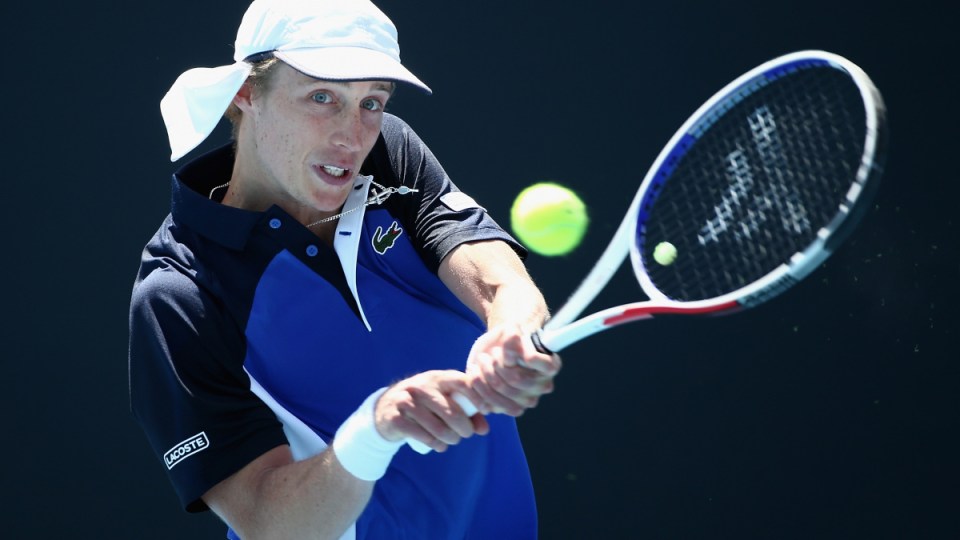 It's all about the hat, and the game: Marc Polmans in action in round one. Photo: AAP
analysis

For the most obvious hint of Marc Polmans’ quirkiness, look no further than the hat.

Legionnaires style, a la Ivan Lendl, it flaps about like a millinery version of a tragic 1980s mullet.

An enthusiastic social media reception notwithstanding, it is not a fashion the young Victorian expects to catch on.

“I don’t think those guys are going to be able to do it,’’ Polmans laughed.

“They’ve got pretty big images, so I don’t think I can see them wearing the legionnaires hat any time soon.’’

Polmans has played in the SunSmart favourite since the age of eight, parents Gavin and Nicola and their two sons having moved from South Africa to Melbourne for tennis and quality-of-life reasons two years later.

At 22, Durban-born Marc has now recorded the biggest and longest win of his career and first at grand slam level, after spending more than four hours overcoming seasoned Kazakh Mikhail Kukushkin.

“I’ve beaten a higher-ranked player before, but on this stage in front of everyone in the Australian Open, I think that’s the biggest win,’’ he said, before heading to the ice bath to try to recover for Wednesday’s appointment with 24th seed Dusan Lajovic.

Originally scheduled for Monday, the weather postponement meant that – as for compatriots John Millman and Jordan Thompson, who also advanced in the bottom half of the draw – there would be no rest day in between.

“It’s going to be a challenge, but in saying that when you play in the Aussie Open you can find, definitely, a bit of extra energy.’’

Regardless of what happens from here, Polmans is already guaranteed his richest payday – $128,000, less the $18,000 that Tennis Australia recoups from all wildcard recipients who win a round to reinvest in the system – and a career-best haul of rankings points that will move the world No.133 closer to the more comfortable double-figure status he craves.

It also enabled Polmans to avoid a devastating repeat of the opportunity lost 12 months earlier, when he fell to American Denis Kudla after leading by two sets to love on his grand slam singles debut.

The Australian admitted that experience “was definitely starting to creep into my head a little bit” on Tuesday when Kukushkin pushed the match to a deciding fifth set, with the 6-4 6-3 4-6 6-7 (8) 6-4 result not finalised until more than an hour after he had failed to serve out the fourth set, or capitalise on three match points in the tiebreak.

A repeat, clearly, would have been crushing for a player whose attitude and work ethic has long impressed Tennis Australia’s head of professional tennis, Wally Masur.

“In 2019 it was a good step, another brick in the wall, because he started to play a few Tour matches and I think that’s big for an emerging player, to just play at that level and show us you can win, so he was very deserving of his wildcard and hey, he took advantage, so good on him.”

Financially, too, it is a very big deal, with Polmans having made regular withdrawals from the Bank of Mum and Dad before living for some time off the $90,000 he pocketed for reaching the 2017 Australian Open doubles semi-final with Andrew Whittington.

He receives support as a contracted TA athlete, but has also invested in himself by appointing a private coach, Marcel du Coudray. Tick.

Like the injured warrior Alex de Minaur, Polmans has a fine example close by in Millman, who eked out a tough four-set win over the higher-ranked Ugo Humbert to set up a second-round clash with 31st seed Hubert Hurkacz.

Intensely physical is just how the Queenslander likes it. Well, kind of.

“Oh, man, I’d rather win in 90 minutes, for sure. I’d rather win quicker,’’ admitted Millman, the admirable Australian men’s No.3 having spent almost three-and-a-half hours on court.

“I think people know that about me.

“They know that I’m not going to go away. And that’s just my brand of tennis … I think I can take a bit of pride in how I go about my business, too. I try to leave absolutely everything out there, win or lose.

“Now it’s all about recovery … trying to get the body as good as possible to get ready to fight again.’’

As it is for Polman, for whom fitness has been a hallmark since his junior days.