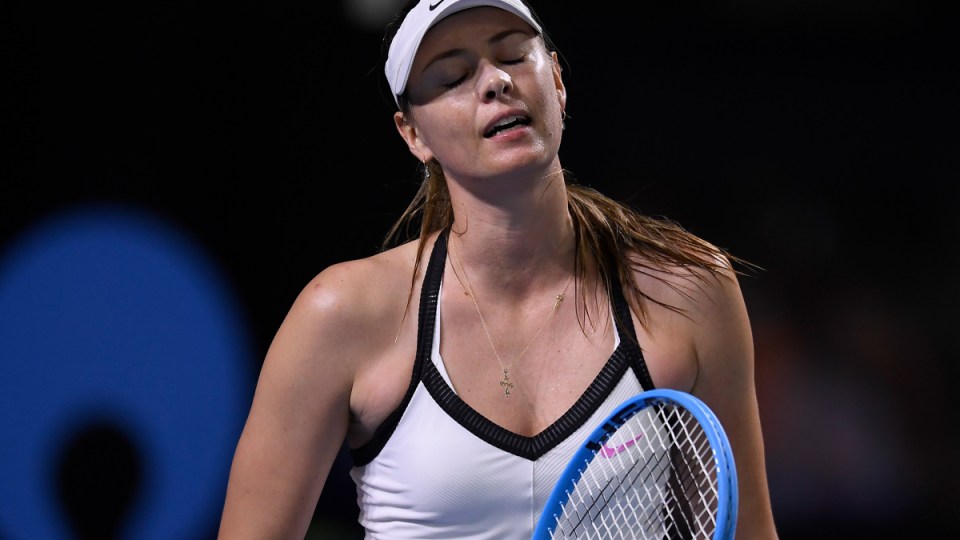 Five-time grand slam champion Maria Sharapova has been bounced out of the Brisbane International. Photo: AAP

A misfiring Maria Sharapova has been upset by American qualifier Jennifer Brady in the first round of the Brisbane International.

Sharapova may be one of the tournament’s biggest names but had to rely on a wildcard to contest the season opener after her ranking slumped to 147 following an injury-plagued 2019.

However, she didn’t look troubled by her recurring shoulder complaint when she cruised through the first set.

But Brady hit back to book a second round clash with Australia’s world No.1 Ashleigh Barty.

Fifth seed Kvitova of the Czech Republic overcame a nervous start to overpower Pavlyuchenkova 2-6 6-1 6-0 in just over an hour and a half at the Queensland Tennis Centre’s stadium court.

World No.7 Kvitova, a former Brisbane champion, was expected to hit the ground running on Tuesday night.

However, another upset loomed when world No.29 Pavlyuchenkova came out swinging against the 2019 Australian Open finalist.

In the end Kvitova found her range to extend her head to head career record against the Russian to 8-4, but former US Open champion Sloane Stephens wasn’t so lucky.

Russian qualifier Liudmila Samsonova produced the upset of the tournament to date, defeating world No.24 Stephens of the USA 6-4 2-6 6-3.

World No.129 Samsonova – making her Brisbane debut – will now take on Kvitova in the second round.

But defending Australian Open champion Naomi Osaka made a winning start to her summer, defeating Greece’s Maria Sakkari 6-2 6-7 (4-7) 6-3 to set up a second-round encounter with American Sofia Kenin.

The two-time grand slam champion and former world No.1 took over two hours to overcome the in-form world No.23 Sakkari, hitting 16 aces on her way to the victory.

“I think she’s beaten me every time we have played.

“It’s also hard to play someone who is going to be playing at home and have the crowd and all that.”

Sharapova out after first round of Brisbane International