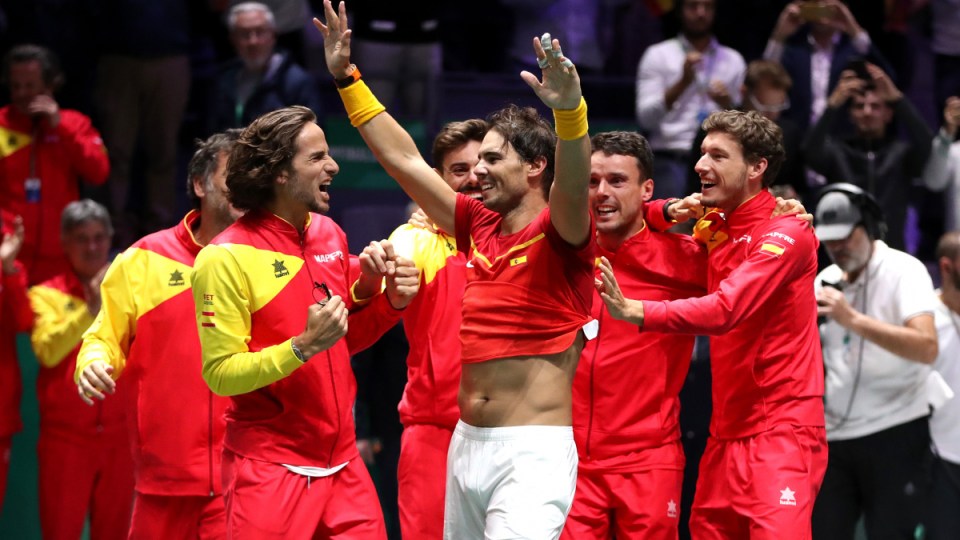 The Spanish team celebrates their win against Canada. Photo: Getty

Hosts Spain has claimed the Davis Cup after after an emotional win over first-time finalist Canada.

It was a particularly poignant victory for Roberto Bautista Agut, coming just three days after the death of his father.

The parochial Spanish crowd that packed the La Caja Magica’s centre court erupted when Nadal converted his third match point against Shapovalov to bring to end a drama-filled week of tennis.

World No.1 Nadal capped off a gruelling finals campaign by winning all of his eight matches at the 18-nation competition that debuted a World Cup-style format.

Playing for the fourth successive day, the 33-year-old was surely tired and it began to show as Shapovalov fought to keep Canada alive in their first Davis Cup final.

Tournament organiser and Barcelona soccer star Gerard Pique, his wife Shakira – who performed in the closing ceremony – and Spanish King Felipe VI were among those celebrating Spain’s first Davis Cup title since 2011.

The celebration was especially emotional for world No.9 Bautista Agut, who sent Spain on their way to victory after returning to the team following the death of his father on Thursday.

He pointed his finger to the sky after winning the final point. His father’s health deteriorated after an illness that stemmed from a 2016 accident.