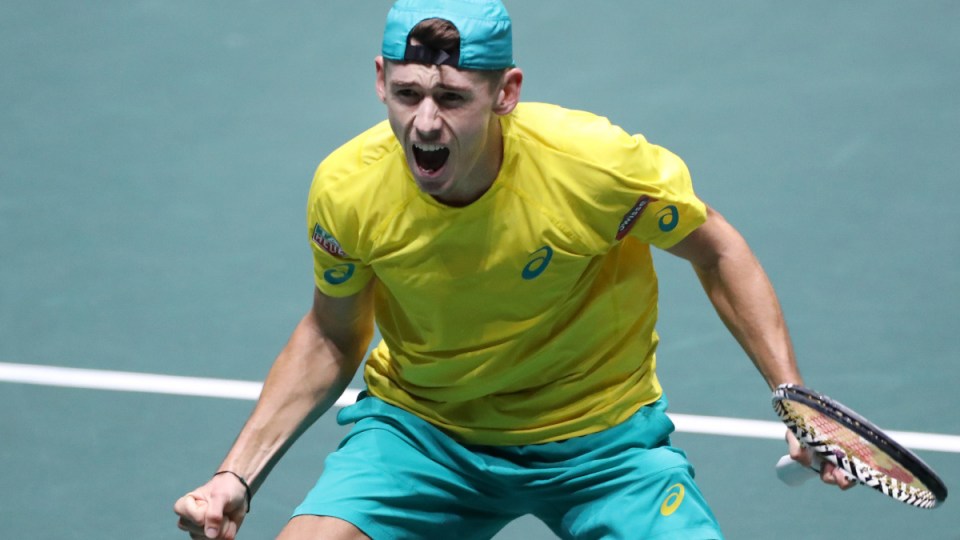 Alex de Minaur has reinforced his reputation as one of the most exciting young players in world tennis, seeing off Belgium’s David Goffin to book Australia’s spot in the Davis Cup quarter-finals.

De Minaur won the first set in 26 minutes as Goffin struggled to find an answer to the red-hot Australian’s powerful return game.

The Belgian No.1 finally got on the board in the opening game of the second set, but de Minaur continued to have success from the back of the court.

The world No.18 broke again at 3-1 but Goffin, with his back firmly against the wall, broke for the first time at 5-3 when de Minaur was serving for the match.

De Minaur then saved a set point and forced the tiebreaker which he closed out to seal his 40th victory of the season.

It continues his brilliant 2019 in which he has won three ATP titles to rocket up the rankings.

Kyrgios largely kept his emotions in check to see off the wily 35-year-old who has been Australia’s nemesis in two previous Davis Cup encounters in a match delayed by more than two hours.

A glimpse into the brilliant tennis mind of Kyrgios! 🧠

He powered through the opening set in 24 minutes and then held his nerve against a much-improved Darcis in a high-quality second set in front of a noisy crowd dominated by Belgian fans.

Once again Kyrgios held his serve throughout, hurling down 22 aces – including an incredible nine in 10 points in the latter stages of the second set.

But Darcis refused to lie down and saved two match points – one from a 21-shot rally and the second from a 31-shot extravaganza.

Kyrgios did well to hold firm when it mattered and saved two set points to close out the win.