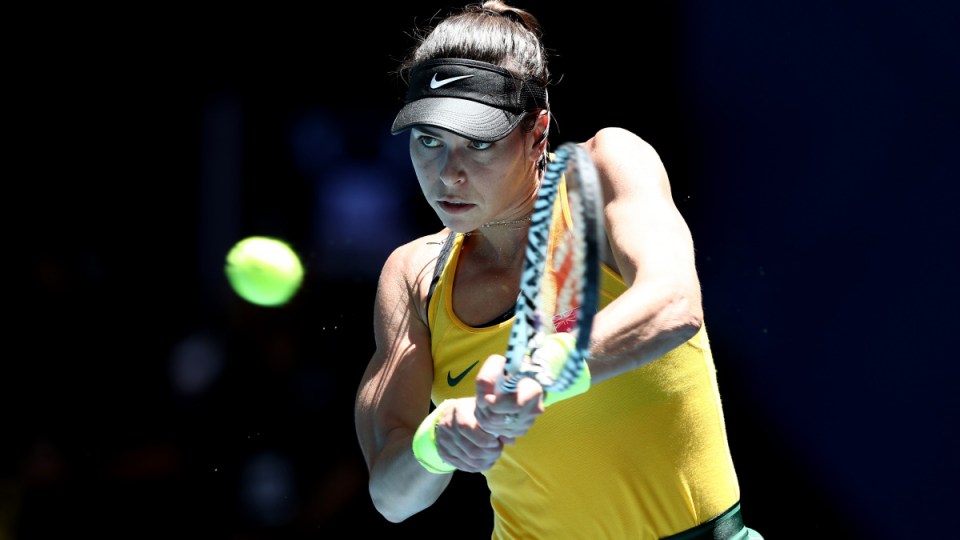 Australia’s Fed Cup captain Alicia Molik has a big call to make on Sunday as she weighs up whether to recall veteran Samantha Stosur to the singles fray in the Perth showdown against France.

Nervous debutante Ajla Tomljanovic was outclassed by French No.1 Kristina Mladenovic 6-1 6-1 on her Fed Cup debut on Saturday, but the tie was evened up quickly as World No.1 Ashleigh Barty smashed Caroline Garcia 6-0 6-0.

Should the scores be level after the reverse singles, Barty will partner Samantha Stosur to face Mladenovic and Garcia in a deciding doubles rubber.

However, both teams have the option of changing their nominated players for Sunday’s rubbers and Molik will have to weigh up whether to substitute Tomljanovic from the singles.

“There’s not many tournaments throughout the year where you get a second bite of the cherry the day after – what a brilliant situation to be in,” Molik said on Saturday, while defending Tomljanovic.

I know she was nervous. That’s normal for your first match. And I know she’s excited … if she gets the nod.

“That’s probably something we have to discuss as a team as well.”

Consistently elevating her game under pressure, Barty obliterated Caroline Garcia 6-0 6-0 to even the ledger between Australia and France in the Fed Cup final.

The clinical victory in just 56 minutes made it 1-1 in the best-of-five format at RAC Arena.

Matched against an opponent who was ranked No.4 in the world last October, Barty delivered a complete performance.

“I think that’s probably the best tennis match I’ve ever played in my life,” an elated Barty said.

“I’m so happy to be back here in Perth. I started my year here so it’s a hell of a way to finish it off, too.”

The French Open champion delivered an awe-inspiring performance to snatch back the momentum for an Australian team chasing the nation’s first Fed Cup title in 45 years.

“For me, it doesn’t really change,” Barty said.

“Whether we’re 1-0 up or 1-0 down, it’s still about me doing what I need to do to prepare in a way that gives myself the best chance of winning which, in turn, helps the team.”

Barty’s Fed Cup winning streak extends to 15 matches, and her mouth-watering clash with Mladenovic on Sunday will go a long way towards determining which nation claims the trophy.

With the temperature climbing to 36 degrees before midday, Mladenovic showed no discomfort in a match in which she wielded her lethal forehand to devastating effect.

Fresh from partnering Hungary’s Timea Babos to take out the doubles title at last week’s season-ending WTA Finals in Shenzhen, China, Mladenovic is set to pose a stern test for Barty.

“I really (played) almost a perfect match. I was really in the zone,” Mladenovic said.

“I love this kind of event. The more pressure it is, the more special is the event. I love fighting and I’m so proud to give this first point to my team, to my country.”

But the world No.51’s nerves were obvious throughout.

“It’s not something you can really explain,” Tomljanovic said.

“That’s just my personality. I want it even more when it’s for others and for my teammates and my country.”