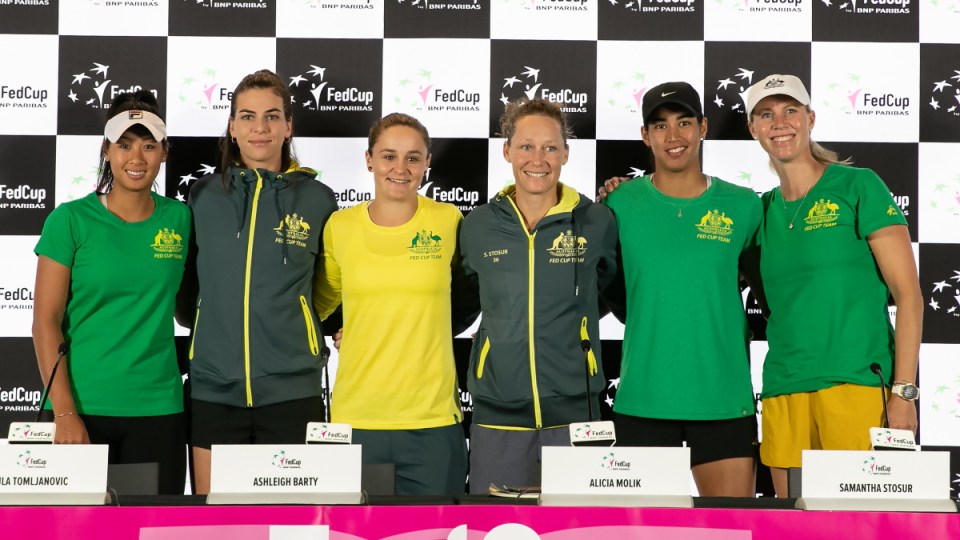 After 18 months of being dogged by retirement talk, veteran Samantha Stosur’s role in the Fed Cup at Perth has been reduced in favour of a rising star.

Fed Cup debutant Ajla Tomljanovic has displaced Stosur in the singles and i will now open Saturday’s proceedings against French No.1 Kristina Mladenovic.

Tomljanovic, 26, was on Friday selected ahead of Samantha Stosur to back up world No.1 Ashleigh Barty in the singles, while Stosur will get her chance to shine in the doubles.

Mladenovic and Caroline Garcia will play both the singles and doubles for France in the best-of-five rubbers format at RAC Arena.

Australia is trying to win its first Fed Cup title in 45 years and Tomljanovic told reporters it would be the highlight of her career.

“I think the most confidence I draw from this week is my teammates. They’ve been here for me this whole week in practice,” she told reporters.

Everyone’s been really encouraging so I’m definitely drawing from that the most.”

Croatia-born Tomljanovic is no stranger to her French opponent – the pair rose through the ranks together and their fathers played each other in professional handball.

“We’re the same age and we grew up together playing the same tournaments, so I think there will be no secrets tomorrow,” Tomljanovic said.

While Tomljanovic is Australia’s second-highest ranked female, her selection is still something of a gamble, given Stosur boasts the most singles wins for Australia in Fed Cup history.

The Australian has a 2-0 career record against her higher-ranked opponent.

“We practice often together and we know each other really well,” Mladenovic said.

“She’s a great player. It’s going to be a tough and exciting match.”

But Mladenovic and Garcia are formidable opponents, meaning there is every chance the contest will go down to a doubles showdown on Sunday.

Mladenovic had a close look at Barty at last week’s season-ending WTA Finals in Shenzhen, China, where the top seed won the singles and the Frenchwoman partnered with Hungary’s Timea Babos to take the doubles.

Barty will launch her campaign on Saturday against former world No.4 Garcia.

“Caro’s a great friend of mine and I know that we both play our best tennis during Fed Cup week so I think tomorrow’s match is going to be of a really high quality,” Barty said.

“I’m certainly going to have to bring my best to make sure that I can match it with her.”

Mladenovic was the last player to beat Australia’s spearhead before Barty embarked on a 15-match winning streak in Europe that culminated in French Open glory and her ascent to world No.1.

Barty hasn’t forgotten the 6-2 6-3 defeat in Rome and told AAP during the week that she would be a formidable opponent.

“Kiki has the ability to play well in the big moments,” Barty said.

“Obviously she was on a bit of a heater in Shenzhen in doubles and she’s a beautiful doubles player. We’ve seen that time and time again.

“So it’s someone I would love to play and try and right my wrongs from midway through the year when we played in Rome.”