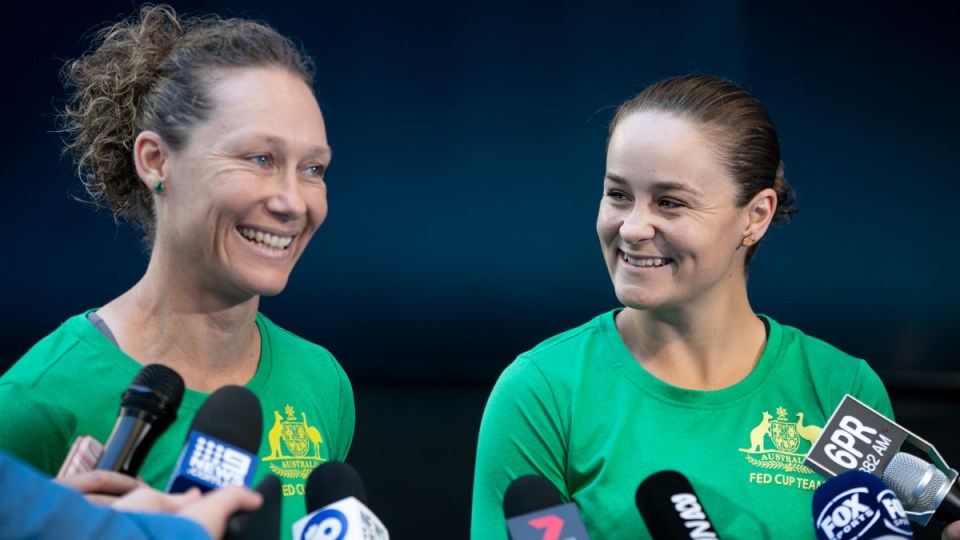 World No.1 Ashleigh Barty says she is still hungry for Fed Cup success as she looks to lead Australia to their first title in 45 years when they take on France in Perth this weekend.

Barty arrived in Perth on Tuesday from Shenzhen, China, where she won the season-ending WTA Finals tournament and pocketed more than $A6m in prizemoney.

But the 23-year-old said that hadn’t sated her desire to win the Fed Cup.

“This was a week I circled at the beginning of the year that I wanted to target, and to be able to finish the year playing as a team for your nation is pretty special and I’ve been looking forward to it for a long time,” Barty said.

“All of us are extremely hungry – it’s taken us probably two or three years to get into this position and now it’s about coming out and enjoying it this weekend.”

Despite the tough slog in China Barty said she felt in good shape.

“I’m as fresh as you can expect to be in the last week of the season – there’s certainly no issues.”

Barty fronted the media alongside veteran Samantha Stosur, who made the semi-finals in the doubles in Shenzhen.

Stosur said she hadn’t been told whether she or debutante Ajla Tomljanovic, who was only cleared to represent Australia three weeks ago, would get the nod for the other singles rubber.

“All of us want to put our hand up for any match and we’re all out preparing as if we will be playing but nobody has been given the nod just yet,” the 35-year-old said.

“I’ve played Fed Cup for 16 years so to now be in the final, it’s been a long time coming and we want to make the most of it.”

The pair predicted French No.1 Kristina Mladenovic, who won the WTA Finals doubles title and eliminated Stosur en route, to have a big impact.

She is ranked world No.40 in singles and No.2 in doubles.

“We’ve both played Kristina enough on the singles and doubles court and her name is going to feature prominently on the weekend for the French team and she obviously had a fantastic week in Shenzhen, winning the doubles,” Barty said.

“We know what to expect so it’s about keeping it simple.”