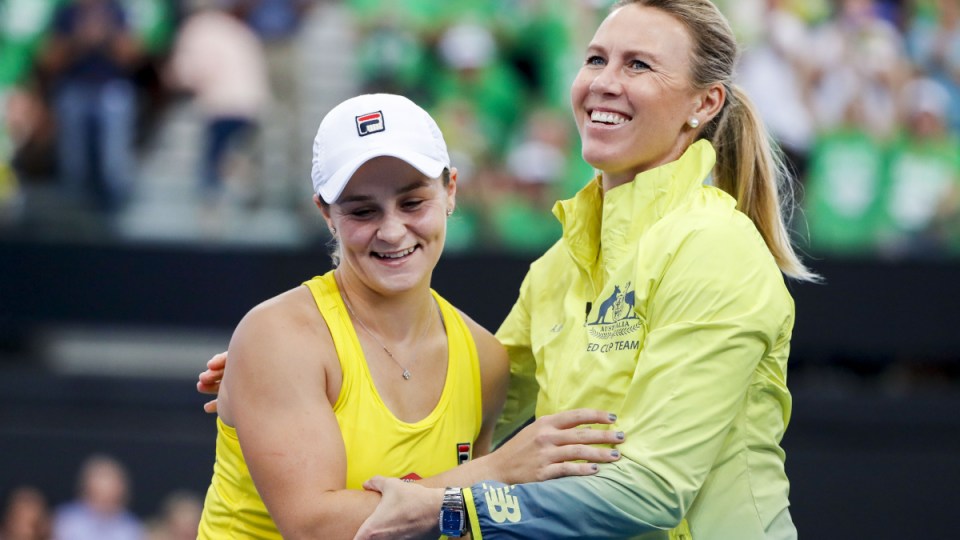 Fed Cup captain Alicia Molik has warned Ashleigh Barty’s rivals they’ll be wasting their time waiting for the world No.1 to melt under what is sure to be an intense summer spotlight.

Barty will be carrying the hopes of the nation in Perth next week as she leads Australia into the final battle against France chasing a first Fed Cup title in 45 years.

The heat will be next-level when Barty then heads to Melbourne in January as the first home top seed at the Australian Open since Lleyton Hewitt in 2003 and bidding to break the country’s 41-year singles title drought.

But Molik is convinced the cool-headed 23-year-old will cope just fine under the weight of expectation.

“She hasn’t buckled before. I don’t think she’s about to do it,” Molik said ahead of Barty’s Saturday night (AEST) semi-final at the season-ending WTA Finals in Shenzhen to be played

It’s been really a theme for Ash for the last year or 18 months, hasn’t it? She rises to the occasion in the bigger matches.

“She’s more than proven herself in Fed Cup over many years now, particularly this year. We relied on Ash a lot the last two ties. She revels in that type of environment.”

Barty has been unbeaten in four singles matches and two doubles rubbers in Australia’s wins over the USA and Belarus this year.

“She had a brilliant few wins in America, knocking off (Madison) Keys, starting off with a deficit in the first set,” Molik said.

“Also winning the decisive doubles rubber (in the semi-final against Belarus) as well. I can’t forget about that because it was so significant. She competed the same in April (against the USA). Big matches.

“I think she is built for that. Doesn’t shy away from the big moments. That’s a true quality for Ash.”

Molik admits the Australian Open will be more unknown territory for Barty, a losing quarter-finalist this year to Petra Kvitova, who she crushed 6-4 6-2 this week in Shenzhen.

“She hasn’t entered as No.1 (before). Sometimes the expectations are good because you bring a certain level,” Molik said.

“I mean, she’s achieved so much already, I’m not sure if there will be a heap of expectation on Ash.

“I think her demands will be that much greater around the public, the press, TV, everyone wanting to get a piece of her.

“But she has a great team around her to work with what she likes doing, working out her time and schedule.”

Molik is less sure about the International Tennis Federation’s decision to break from decades of tradition and – like it did with Davis Cup – scrap Fed Cup’s home-and-away format in favour of a week-long finals series in 2020.

“For us in Australia, yes, we have the summer in January, but then tennis leaves the country a lot. Through the year it’s our opportunity as a Fed Cup team to represent Australia, to play in front of families, kids, clubs.

“We always take the opportunity to run girls camps around the Fed Cup. It really I think bolsters interests for a lot of kids.

“That I think is going to be a real shame. We don’t have that opportunity at home to continue that fashion. Fed Cup in Australia has a really, really rich history.