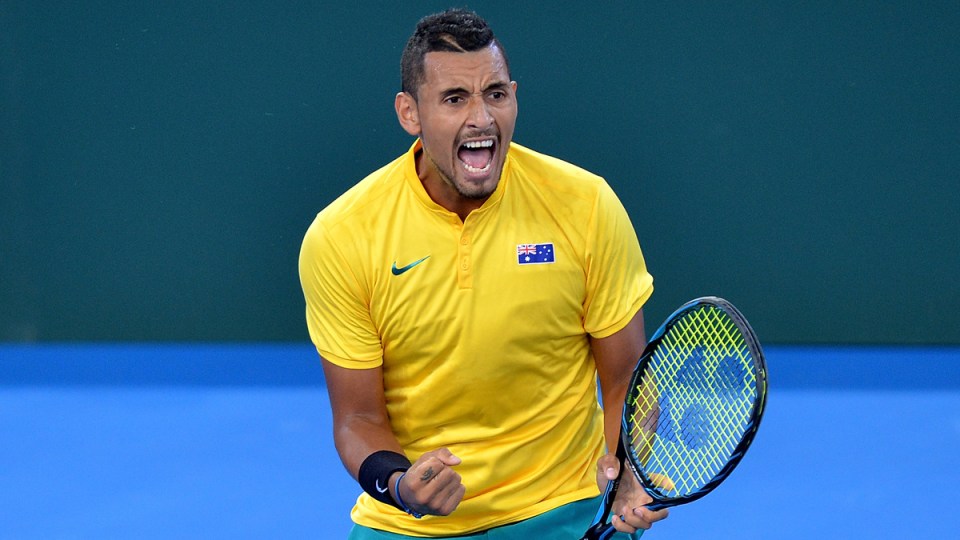 Nick Kyrgios will return to Davis Cup action for the team finals in Madrid in November. Photo: Getty

Australian captain Lleyton Hewitt is prepared to overlook the most recent spate of bad behaviour by Nick Kyrgios, saying the firebrand has earned his recall for the revamped Davis Cup finals.

Kyrgios is serving a six-month probation period for his spectacular meltdown in Cincinnati in August and subsequently branding the ATP corrupt at the US Open.

But his suspended sentence only applies to the ATP Tour and not Davis Cup.

Hewitt said the 24-year-old Kyrgios had done enough to work his way back into the team for the November tournament.

"We’re definitely one of the more dangerous teams in the competition."

Kyrgios was overlooked for the qualification tie when he failed to meet new performance and behavioural standards.

“I have been watching that closely,” Hewitt said of Kyrgios, adding the suspended ban hadn’t affected his decision.

“I feel like on the Davis Cup court he’s done absolutely everything I’ve needed in the past; he hasn’t put a foot wrong.

“There’s a lot of things he does in a team environment that I actually think we will see the best of him.”

Hewitt said the world No.30 made contact with him in March to talk about how he could get back in Australian colours.

“We sat down in Indian Wells and went through things and he’s been so willing to do whatever it takes to get back into the Davis Cup team,” Hewitt said.

The two-time grand slam champion said Kyrgios had sacrificed his personal career to ensure he would be fit for the new-look 18-team finals, which will be held in Madrid from November 18 to 24.

Hewitt said Kyrgios had pulled out of recent tournaments to rest his shoulder.

“After the Laver Cup he had a shoulder/collarbone injury which he’s pretty much over now but he had to take a few weeks out as he felt like if he kept playing that was going to jeopardise his chances of possibly playing Davis Cup,” Hewitt said.

“He comes in a little bit underdone, but I’m fortunate he’s a guy who can light it up when he needs to and I think he’s a guy that this format will suit.”

Jordan Thompson, John Millman and doubles specialist John Peers make up the five-man team, with the skipper unable to find room for young gun Alexei Popyrin, who has enjoyed a phenomenal 2019 season.

Australia have been pitted in Group D along with Belgium and Colombia.

If it can top the section, it will qualify for the quarter-finals and meet either the United States, Italy or Canada for a place in the last four.