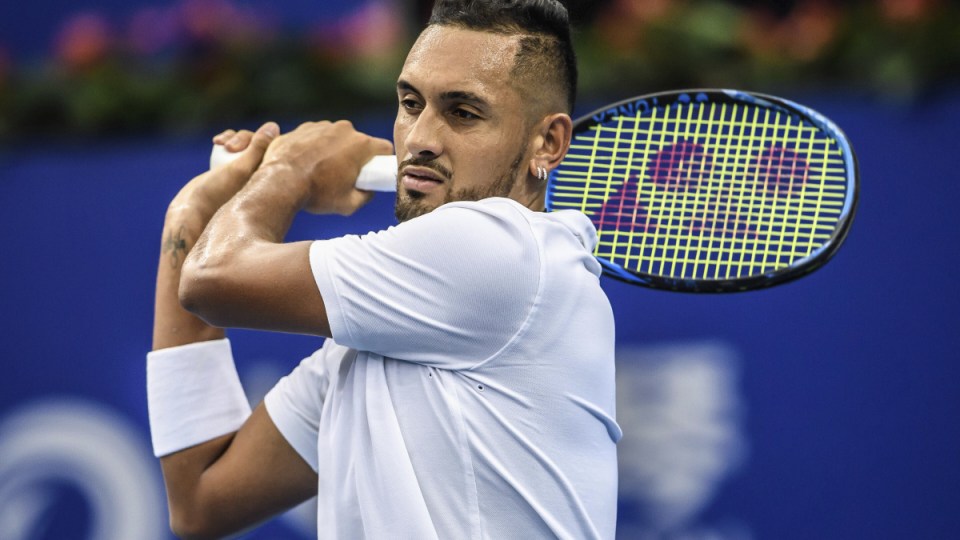 Nick Kyrgios is the main hope for Australia in the mens draw. Photo: AAP Photo: AAP

Nick Kyrgios has surprisingly managed to avoid an immediate ban from the ATP Tour following the conclusion of an investigation into his explosive second-round match in Cincinnati last month.

However the controversial Australian player will be off the tour for the immediate future at least after he announced he would miss upcoming tournaments in Asia due to injury.

The peak body for tennis is expected to come under the microscope after instead opting to give the firebrand Australian a 16-week suspended ban and fine.

The suspension and fine of $US25,000 ($37,000) will kick in if Kyrgios commits a similar offence within a six-month period, while he must also agree to continued support from a mental skills coach during tournaments plus seek extra help from a specialist in behavioural management before the end of the year.

Kyrgios had already been handed a record fine of $US113,000 ($167,000) after committing eight offences during his second round match with Karen Khachanov, including verbally abusing umpire Fergus Murphy and spitting towards the official at the Cincinnati Masters in August.

“Why do I always have problems with this potato in the chair?” Kyrgios asked of the Irish umpire at the time.

Kyrgios was officially given a code violation between the second and third sets for swearing at the umpire.

Kyrgios then requested a bathroom break, which the umpire allowed him — but he never made it to the bathroom.

Instead, Kyrgios walked into an empty hallway, smashed two racquets into the ground, turned around and came back to the court.

Following the match he said “the ATP was pretty corrupt anyway” before backing down from the claims.

The ATP determined in its findings those comments did not constitute a major offence and determined no further penalties would apply.

The investigation was conducted by Gayle David Bradshaw, executive vice president, rules and competition, who concluded that Kyrgios “has been found to have committed Aggravated Behaviour under the Player Major Offense provision in the ATP Code.”

After a string of incidents over the past five years former Australian greats Pat Rafter and Rod Laver had called for Kyrgios to receive a ban.

In October 2016 Kyrgios was banned for eight weeks and fined $32,000 in Shanghai for a range of behaviours including “lack of best efforts”.

The period took in the closing stages of the year’s tour and enabled him to participate at the Australian Open in 2017.

Earlier on Thursday, Kyrgios announced he would return to Australia for an unspecified period of recovery.

The Australian had been playing at the Laver Cup for Team World under captain John McEnroe when he pulled out of the final day of the teams event in Geneva.

“Unfortunately a collarbone injury I sustained at [the] Laver Cup has escalated and has forced me to pull out of the Asian swing, I’ll be heading back to Australia to rest and recover,” Kyrgios tweeted. “See you all soon.”

Following the ATP announcement he then posted on Instagram, saying: “Everyone. I can still play, I’m just on probation, relax, I’ll be playing and tennis will still be fun it’s ok I just have to keep a lid on my behaviour that’s all.”