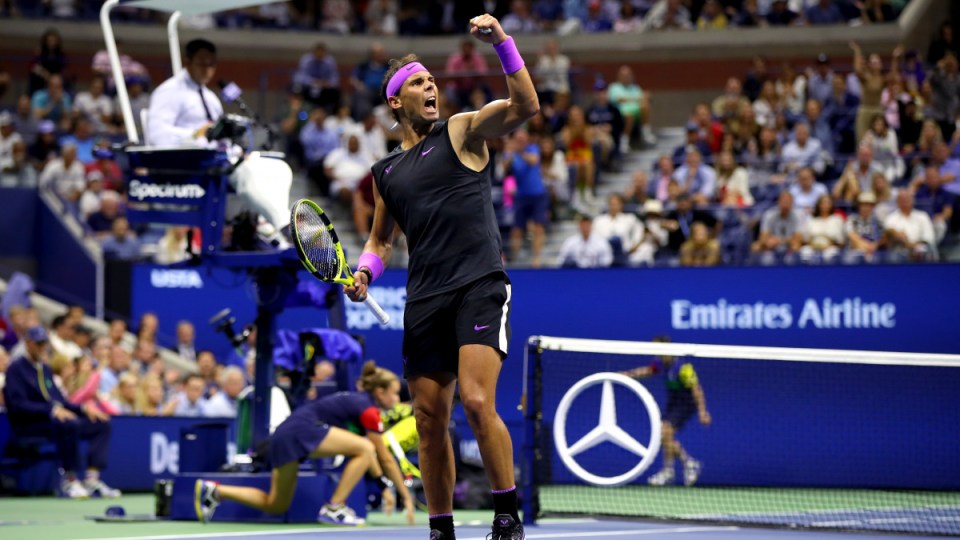 Rafael Nadal wins a point during the US Open final. Photo: Getty

Rafael Nadal has won an epic US Open final over fifth-seeded Russian Daniil Medvedev – the Spaniard’s fourth title at Flushing Meadows and putting him in sight of Roger Federer’s all-time titles record.

He had previously not beaten a top contender since taking down world No.1 Novak Djokovic in the 2013 final.

The win, which took more than four hours, put the 33-year-old to within one slam of Federer’s 20 men’s singles majors.

Nadal powered away early in the match, with an edge in first-serve winners, but he couldn’t shake the in-form Medvedev.

It was a sweet victory for Nadal, who had been forced to retire injured in last year’s semi-final against the third-ranked Juan Martin del Potro.

Only Federer, Pete Sampras and Jimmy Connors, with five titles each, have reigned more times than Nadal in New York in the 51-year open era.

The great Spaniard’s four hour and 49 minute victory extended the dominance of tennis’s big three of Nadal, Federer and Djokovic to 12 straight slams.

Medvedev was striving to become the first man in his 20s to claim a singles slam since Andy Murray won his second Wimbledon title in 2016.

Riding a wave of confidence after four consecutive hardcourt finals in the American summer, 23-year-old Medvedev threatened to pull off a nigh-on impossible comeback win over the mighty Majorcan after taking the third and fourth sets.

Nadal had won more than 200 matches for just one defeat after establishing two-set leads during his glittering career.

The Muscovite, though, had Nadal on the ropes – and feuding with the chair umpire in frustration at a series of time violations he earned for exceeding the 25-second limit between points – early in the fifth set.

Even after dropping four successive games to trail 5-2 in the tense deciding set, Medvedev wasn’t done.

Rattled by another time sanction from American official Ali Nili, Nadal double-faulted on break point to offer Medvedev a lifeline.

The world No.2 proved an immovable object against the irresistible force, finally prevailing on his third match point – when the Russian’s forehand return sailed over the baseline – to add another US Open trophy to go with his titles in 2010, 2013 and 2017.

After the match, Medvedev acknowledged Nadal’s feat and – for one of the first times in the tournament – was cheered by the New York crowd.

Nadal’s 19th major leaves the 33-year-old in position to catch Federer at the Australian Open in January. He’s never been closer to his Swiss rival.

At one point, after he won the fourth of his five titles in New York in 2007, Federer was nine slams clear of Nadal.

Federer still had four more majors than Nadal as recently as after winning his 20th at last year’s Australian Open.