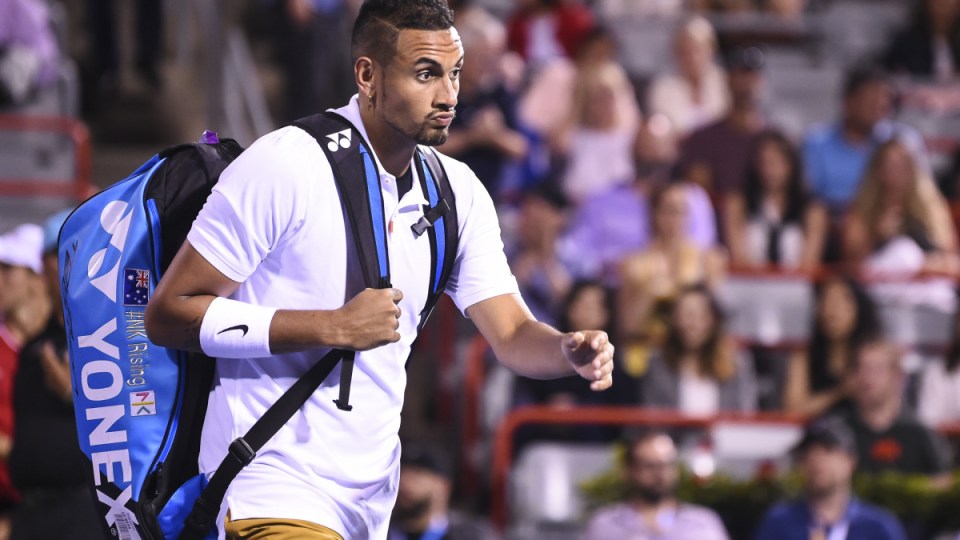 Nick Kyrgios looks nonplussed after being bundled out of the Canadian Open by Kyle Edmund. Photo: Getty

An out-of-sorts Nick Kyrgios, upset over a towel, has been beaten in the first round of the Canadian Open in straight sets to leave John Millman as the lone Australian in the main draw.

Briton Kyle Edmund outserved Kyrgios and did not face a break point as he closed out a 6-3 6-4 victory in 67 minutes, which was only delayed by a rain interruption late in the second set.

Coming off a title success in Washington just days ago, Kyrgios was distracted by the towel issue in the first set and Edmund took advantage of the Australian’s frustrations to break serve in the sixth game.

At 4-4 in the second set, play was suspended for close to 90 minutes due to rain, before Edmund broke Kyrgios to love on the resumption of play and wrapped up the match on his serve.

Kyrgios argued with the chair umpire for most of the first set as he insisted on being provided with a white towel rather than the tournament’s branded variety.

He lost his cool after realising he still didn’t have the white towel, despite asking the umpire for one at the start of the match.

“I’m not allowed to leave the chair,” the umpire said.

“But you have a radio. I asked you at the start of the match,” an angry Kyrgios replied.

“You’re telling me you can’t radio in for one white towel?”

Kyrgios was hit with a code violation for an obscenity before finally getting the towel from a ball boy after 20 minutes of play.

Lucky loser Millman was the only Australian to advance to the second round of the ATP Masters 1000 event after Alex de Minaur and Jordan Thompson earlier on Tuesday lost their opening matches.

World No.65 Millman made the most of his reprieve after losing in the qualifiers to defeat Spanish veteran Feliciano Lopez 6-7 (7-4) 7-6 (7-2) 6-3 in an enthralling match.

The Australian will face Marin Cilic next after the Croatian 14th seed’s 6-3 7-6 (9-7) victory over Bradley Klahn.

De Minaur paid the price for his inability to capitalise on break-point opportunities in a 6-4 7-6 (8-6) loss to Dan Evans.

The ‘Demon’ could only break serve once from eight chances, while his British opponent nailed both of his in their two-hour encounter.

Canadian teenager Felix Auger-Aliassime accounted for compatriot Vasek Pospisil 6-2 6-7 (3-7) 7-6 (7-3) to set up a meeting with another countryman, 17th-seeded Milos Raonic.

Others to advance to the second round were Guido Pella, who eliminated 15th-seeded David Goffin in straight sets, Diego Schwartzman, Borna Coric, Hubert Hurkacz and Radu Albot.

Kyrgios towelled up at Canadian Open