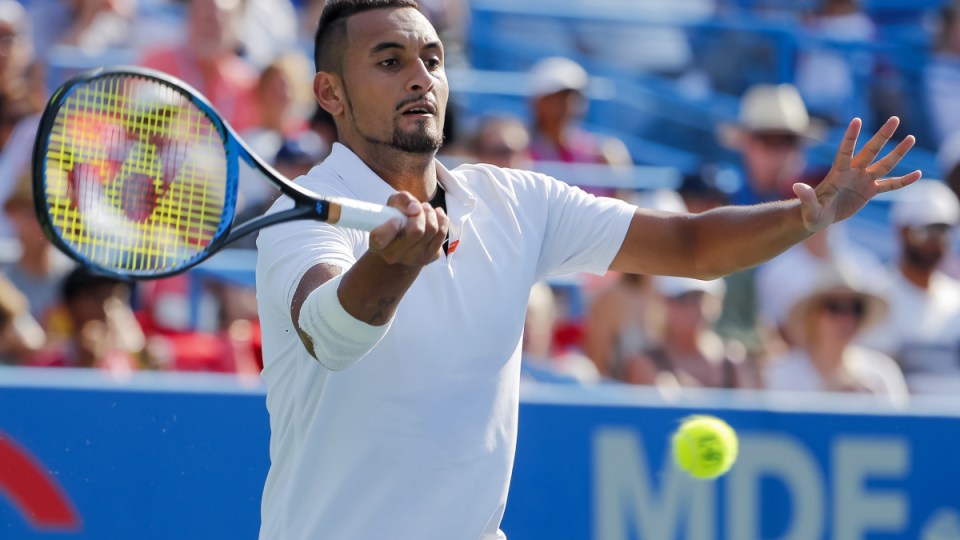 Nick Kyrgios in action against Daniil Medvedev in the final in Washington. Photo: AAP

Nick Kyrgios has claimed his second ATP Tour 500 series title of the year with a hard-fought victory over Daniil Medvedev in the final of the Washington Open.

Kyrgios reeled off 18 aces en route to a 7-6 (8-6) 7-6 (7-4) victory over the Russian third seed – his second successive win over a top-10 opponent after his semi-final defeat of Greece’s Stefanos Tsitsipas.

The Australian’s serve was a key feature during his run in Washington, where he finished with 111 aces through six matches.

Crucially, he will also climb 25 spots to world No.27 when the rankings are updated on Monday – and be in the frame for a seeding at the US Open later this month.

For a third straight match, Kyrgios approached a member of the crowd to ask where he should serve the ball on match point.

The tactic proved successful again, as he hit his 18th ace to secure the victory in the second-set tiebreak.

The moment @NickKyrgios claimed the @CitiOpen title… *with a little help from a fan* 😛#CO19 pic.twitter.com/UaMwEQkoy9

There were no break points for Kyrgios or Medvedev in the match. Only Kyrgios’ superior play separated the men in the two tiebreakers.

Kyrgios appeared to be struggling early on; he repeatedly clutched at his back, tried to stretch it out own during changeovers and received treatment from a trainer during a medical timeout following the first set.

The 24-year-old was able to ride through the discomfort and deployed his big serve – reaching 140 mph in the second set – to help overcome Medvedev.

“We all know how Nick can play when he wants to, and this week I think he wanted to play.” @DaniilMedwed on @NickKyrgios 🙌#CO19 pic.twitter.com/kxSFhOsx0f

“We all know how Nick can play when he wants to play,” Medvedev said during the trophy ceremony. “And this week he wanted to play, so it was tough.”

Kyrgios, who had been relatively subdued during the first set, lit up after receiving treatment before the start of the second set and thrilled the crowd once again with his array of shot making.

He saved his first underarm serve until the second set, showcased his array of between-the-legs strokeplay, including a lob and a drop shot.

More importantly, he unleashed a steady stream of winners while holding his nerve at crucial points, unlike Medvedev whose unforced errors in the tiebreakers proved decisive.

Kyrgios and Medvedev will meet again in a few days if the Australian No.1 overcomes Briton Kyle Edmund in his opening round of the Montreal Masters. Medvedev, the eight seed, has a first-round bye.

Speaking on Amazon Prime, Kyrgios was thrilled with his tournament win.

“It’s amazing. Honestly, where I was six months ago, the things I was doing, I was putting myself in a really tough situation and to respond like this, having incredible support is just amazing,” he said after the victory.

“I’ve had people behind me backing me and they never lost faith in me even though I’d lost it in myself.

“This week means a lot. Obviously it’s great to get the win but I’ve proved to myself and to a lot of people that were backing me that I still have it and I can still produce at the highest level.”

“I’ve proved to myself and a lot of people that have backed me that I still have it.

“It’s been one of the best weeks of my life from a tennis perspective.”