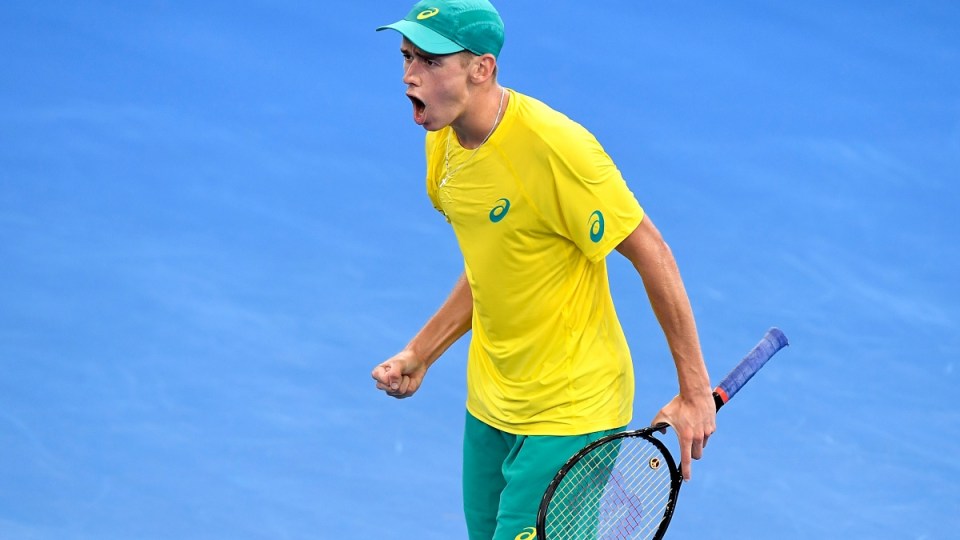 Wayward star Bernard Tomic might think Australia can’t win without him but it seems they have already found a pretty handy replacement in plucky Alex de Minaur.

Rookie teenager de Minaur threatened a boilover on debut before finally being overcome in five sets by world No.5 Alex Zverev, as Germany grabbed a 1-0 lead on Friday in their Davis Cup clash in Brisbane.

The pint-size de Minaur – just 18 – appeared to channel team captain and former world No.1 Lleyton Hewitt with a never-say-die attitude until the German star’s big serve proved the difference.

“He’s sort of been his older brother.

“Even when Alex was the orange boy (in previous campaigns), he’d always get him out to hit with him and help him.

“They’re the things that the public doesn’t see Nick Kyrgios do,” Hewitt added.

“He’s had to grow up very quickly in the spotlight.

“I think he’s really matured over the last six months and I think the Davis Cup has helped that.”

In the lead-up to the first-round tie, Tomic claimed Australia couldn’t win the Davis Cup without him during an ill-fated reality TV show stint.

However, the future appears bright judging by Kyrgios and de Minaur.

“Australia’s got a good one there,” Zverev said of world No.139 de Minaur.

“He is playing unbelievable tennis for an 18-year-old.”

De Minaur cut a shattered figure after the match but still justified Hewitt’s surprise selection as Australia’s No.2 singles player behind Nick Kyrgios.

De Minaur was the team’s No.5-ranked singles player but was named to make his debut after a stellar summer run that included a Brisbane International semi-final berth and his first ATP tour final last month in Sydney.

“Right now, I could not be more devastated,” Sydney-born, Spain-based de Minaur said.

“But I am truly proud. I left it all out there and was that close to getting that first rubber.

“It was the best four hours of my life. I enjoyed every second of it – I didn’t want it to end.

“Things like this don’t happen often so I just cherished every moment.”

Zverev looked in trouble before he fired up after complaining to courtside officials about fan behaviour at 3-3 in the fourth set.

The German quickly silenced the lively parochial crowd, breaking de Minaur in the eighth game to claim the fourth set.

He finally ended de Minaur’s resistance 7-4 in the fifth-set tiebreak.

“I like the support they are giving Australians, but there is a level when they have to be respectful to players,” Zverev said of the fourth-set incident.

“I felt at one stage they weren’t, so I just said that – afterwards, they were fine; there were no issues after that.”