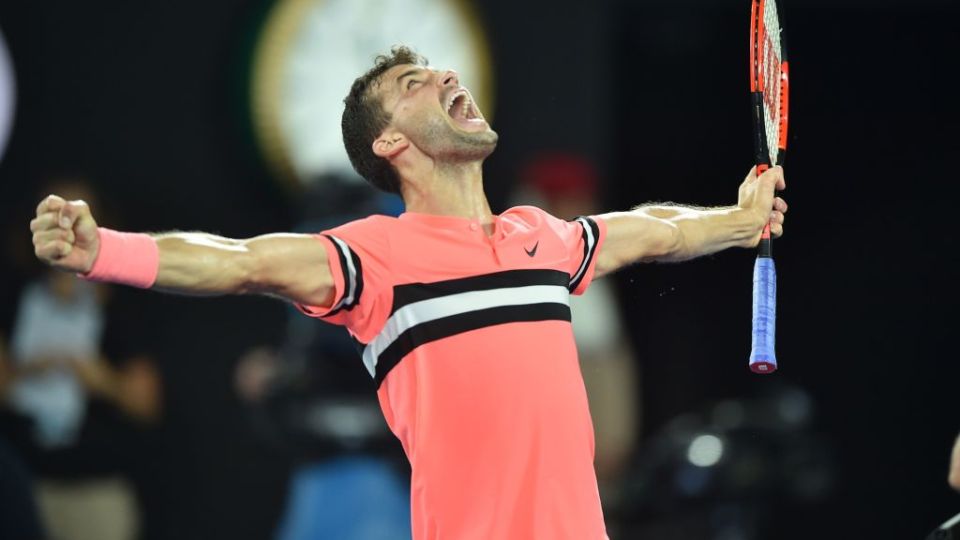 It was a moment you could not have imagined 12 months ago.

Nick Kyrgios, after an Australian Open defeat, involved in a long and heartfelt embrace with his opponent before leaving Rod Laver Arena to a standing ovation.

Just last year at Melbourne Park, the 22-year-old was booed off by his own fans after an implosion so bad John McEnroe dubbed it “a black eye for the sport”. Things have clearly changed.

Flickers of frustration were still laced throughout his third-round Open exit at the hands of Grigor Dimitrov, a thrilling contest that swung like a pendulum over four sets and three hours and 26 minutes before the Bulgarian posted a 7-6 (7-3) 7-6 (7-4) 4-6 7-6 (7-4) triumph.

But Kyrgios walked off with the Australian public well and truly on side, whether he likes it or not – and it is for many reasons, not limited to his exciting tennis, improved attitude, charity work or, as he showed, grace in defeat.

His moment with Dimitrov, a star player who is yet to win a grand slam, was genuine, classy and, as he later revealed, hopefully inspiring.

What a performance from both players. #AusOpen pic.twitter.com/qWcF0Yhn70

“I just told him to believe in himself. Sometimes I think he lacks a bit in belief,” Kyrgios told reporters.

“I think he’s got the game and he’s proved to everyone that he can win one of these slams … hopefully he can go all the way.”

Dimitrov added: “Obviously I have seen a lot of positivity from him the past [few] weeks.

“I just, obviously, wished him good luck and to keep on going that way.”.

There were no boos for Kyrgios this year, and when asked by The New Daily about his reception, and what that meant to him, he responded: “Obviously I feel a lot better this time around.

“Last year, I really didn’t know what I was going to do after the Australian Open.

“I feel like I have more of a vision and goal for this year. I think I’m in a good head space.

“There was periods where I stepped on the court last year where I was just doing it for the sake of doing it.”

Kyrgios showed his hand early, firing 13 aces past the third seed in the first set, but no breaks were forthcoming.

That forced a tiebreak but Kyrgios, who won three of them against Jo-Wilfried Tsonga on Friday, did not have the same joy, ironically handing the set to Dimitrov with a double-fault.

Another tiebreak followed in the second after Kyrgios madly scrambled his way back into the set from 5-3 down, only for Dimitrov to come up trumps again.

As the match progressed, so did a running verbal battle between Kyrgios and his box, but it seemed to rouse the 17th seed, and although Dimitrov saved a set point in the third, a trio of Kyrgios aces in the very next game sealed it.

The crowd roared with approval at every Kyrgios winner in the fourth, desperate to get their man over the line.

And even when he trailed 5-3 after missing a simple overhead, Kyrgios fought on, breaking Dimitrov when he was serving for the match to stay alive.

On this occasion, though, tiebreaks were Kyrgios’ kryptonite.

It was in the third of the match that Dimitrov wrapped up his victory, producing an outrageous cross-court forehand winner that triggered an outbreak of applause.

And on this occasion, it kept going as Kyrgios left the court. How times change.

The Bulgarian will now face unseeded surprise package Kyle Edmund in the quarter-finals after the Briton defeated Italian Andreas Seppi in four sets.

Nadal made to work hard

Nadal will play Croatian Marin Cilic in the quarter-finals, after he edged Pablo Carreno Busta, also in four sets, while Edmund came from behind to beat Seppi 6-7 (4-7) 7-5 6-2 6-3.